BRUSSELS — Mike Teunissen claimed the first yellow jersey of this year’s Tour de France with a sprint victory in Saturday’s opening stage, which was marred by the defending champion Geraint Thomas’s crash in the final stretch.

Thomas’s Ineos team said he fell in the final meters but “feels fine.” Another top contender, Jakob Fuglsang, also hit the ground about 20 kilometers, or about 12 miles, from the finish in a separate crash.

Teunissen, 26, who became the first Dutch rider to wear the yellow jersey since Erik Breukink 30 years ago, edged the former world champion Peter Sagan and Caleb Ewan at the finish line in Brussels.

Thomas quickly got back on his bike after hitting a barrier while his teammate Egan Bernal was held up by the crash. They did not lose time as per race regulations because the accident occurred within the final three kilometers.

In the absence of the four-time winner Chris Froome, Thomas and Bernal have been promoted to co-leaders of the Ineos team.

Fuglsang, who is rated among the favorites this year, was hurt in the crash that took place a few moments earlier. The Critérium du Dauphiné winner, he remounted his bike with blood on his face and right knee, and scratches on his jersey.

The race started from the Belgian capital to honor the 50th anniversary of Eddy Merckx’s first of five Tour victories. The 194.5-kilometer (120.8-mile) trek took the peloton through the Flanders and Wallonia regions and back to Brussels, which will also host Sunday’s team time trial. 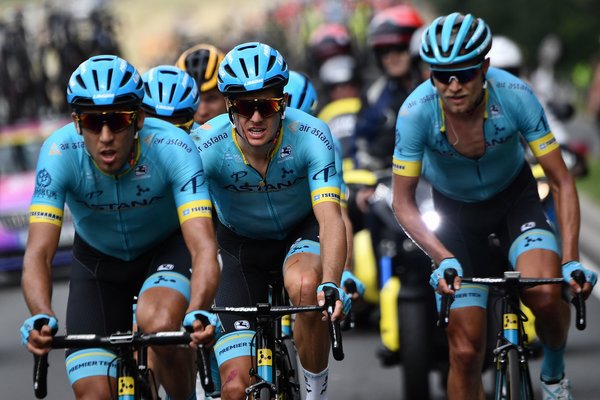 The second spill played havoc within the sprinters’ teams riding at the front and split the peloton in two. It took out of contention Teunissen’s Jumbo-Visma teammate Dylan Groenewegen, the team’s best sprinter.

“Bizarre scenario. I hope Dylan is O.K.,” said Teunissen, who was initially set to be a part of Groenewegen’s lead-out train.

In the slightly uphill section leading to the finish line on the leafy Avenue du Parc Royal, Teunissen perfectly timed his effort to deny Sagan a 12th stage win at the Tour.

The opening day had started in a joyful atmosphere in the cycling-mad city of Brussels. Merckx was greeted by Belgian fans filling the streets as he stood alongside the race director, Christian Prudhomme, in a red open-top car riding in front of the peloton.

Merckx saluted the crowd and chatted with competitors before a short stop on Grand Place, where Prudhomme introduced riders to King Philippe of Belgium and Prime Minister Charles Michel.

Leaving Brussels, the 176 Tour competitors started their loop south of the city at a fast tempo as a group of four riders led by Greg Van Avermaet, a one-day classics specialist from Belgium, immediately formed at the front.

The quartet reached the first difficulty of the day — the Muur van Geraardsbergen, a 1.2-kilometer cobbled climb — with a three-minute lead. Van Avermaet made a point of honor to be first at the top to the delight of home fans cheering him along on the side of the road. The Belgian rider Xandro Meurisse, a member of the initial breakaway, was first at the Bosberg, another climb.

Guaranteed the first best climber’s polka dot jersey, Van Avermaet stopped his effort soon after and was reined in by the peloton as the lead group was reduced to three men: Meurisse, Natnael Berhane and Mads Wurtz. 14 Aug 20
Khloe Kardashian is known for sharing quotes on her Instagram Story, but one in particular…
Celebrities
0