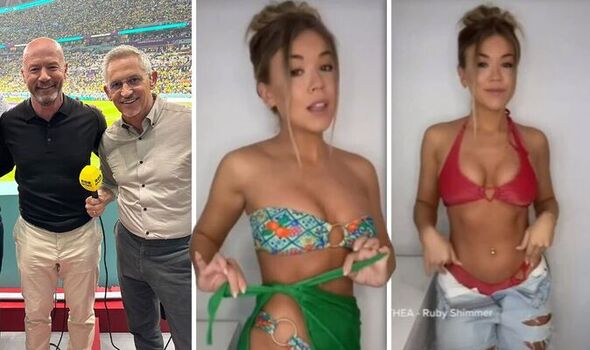 While Alan Shearer continues to commentate the World Cup, his daughter Hollie has tried to keep the summer going as she paraded her gym-honed figure on Instagram as she showed off her favourite bikinis.

Hollie Shearer, 27, showed off her phenomenal figure as she took to Instagram to share her summer bikini wardrobe, while her father Alan Shearer enjoys the World Cup in Qatar.

The musician looked amazing sporting barely-there bikinis, which she accessorised with either sarongs or shorts as she posed in a series of pictures.

She styled her hair in a top bun as she posed up a storm in a red bikini, showing off her ample assets, paired with a pair of skimpy denim shorts.

In another shot, the influencer could be seen in a strapless floral patterned bikini, partnered with a green sarong, drawing in her petite waist.

Hollie is an Instagram influencer and model for brands such as Pretty Little Thing, while also working on her music career.

Hollie Shearer showed off her gym-honed figure in the barely-there swimwear as she showed off her favourite bikinis to her 67,500 Instagram followers.

Alan Shearer’s daughter Hollie styled her hair in an updo

Trying not to distract Instagram viewers from her barely-there bikinis, Hollie Shearer wore her hair in an updo as she showed off her styles for her beach wardrobe.

Hollie Shearer made sure to pose up a storm as she sported a patterned floral strapless bikini. Alan Shearer’s daughter paired this with a tiny green sarong, drawing in her already petite waist.

Alan Shearer’s daughter Hollie also sported an underwired white and blue bikini, showing off her ample assets. However, the singer decided to cover up as she wore an oversized off-blue silk shirt with it.

Alan Shearer’s daughter has made a successful career for herself

Alan Shearer’s daughter Hollie has made sure she can stand on her own two feet away from her footballer father. Hollie is an Instagram influencer and model for brands such as Pretty Little Thing, as well as dabbling in a music career.

Hollie Shearer is currently working on her music career which she describes as Country Pop, with her cover of Will Young’s Leave Right Now reaching an incredible 900,000 streams on Spotify. Talking about her love for music, she revealed: “What I love most about music is how you can connect with it, I love how it can help you emotionally through any mood you’re feeling… Country music is a massive inspiration to me mostly because of how real and raw it is.” 25 Feb 21
Are Khloé and Tristan putting a ring on it? Some fans certainly think so. The…
Celebrities
0

11 Jul 20
When Netflix renewed Mindy Kaling and Lang Fisher's coming-of-age comedy, Never Have I Ever, for a season 2 at the…
Celebrities
0

9 Aug 20
In 2009, MTV introduced the world to eight guidos who loved to drink and party.…
Celebrities
0