Can Gordon Ramsay’s girl lift the glitterball? She’s just 19, but Tilly Ramsay has a TV show, nine million internet followers and a cookbook. So, asks ALISON BOSHOFF, does she have the recipe for Strictly success?

She is his golden girl, a chip off the old block and his ‘best friend’.

Indeed, now Gordon Ramsay’s youngest daughter Tilly has revealed her dad’s fiery influence will help her stay strong in front of the judges as she prepares to compete in this year’s Strictly Come Dancing.

Miss Ramsay said: ‘I think I will take criticism pretty well. I do live with one of the harshest critics in my house — Dad. So I’m pretty used to that kind of stuff. You need criticism to learn.’

When the new series of Strictly begins on Saturday, we will find out which dancer she has been paired with.

Still only 19, Tilly has already had a turbocharged media career. At 14 she was in a Bafta-nominated children’s TV show; she released a cookery book at 15 and now, on the brink of starting university, she has filmed MasterChef Australia and is about to compete for the glitterball.

Her big worry is wearing heels on the show. ‘I’d love to be able to do the Waltz in slippers, be different and unique!’ she said.

Of Gordon, 54, Tilly said: ‘Dad is very excited for me. He’s always wanted to learn how to dance but he’s got two left feet.’ 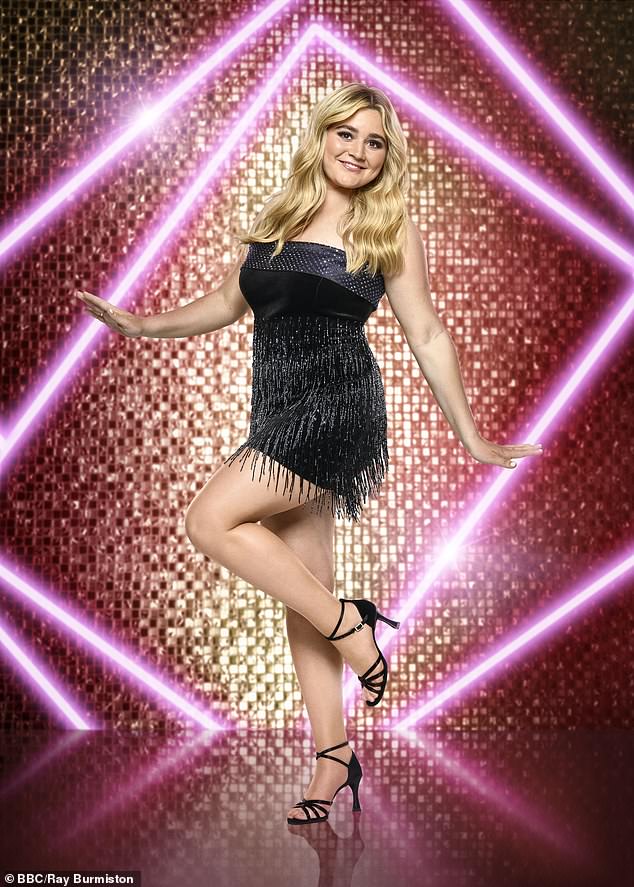 When the new series of Strictly begins on Saturday, we will find out which dancer Tilly Ramsay (pictured) has been paired with

Tilly’s profile has been boosted by her father, who appears in hundreds of her TikTok videos dancing with her and being the butt of pranks involving raw eggs and squashed water bottles. She has 9.5 million followers.

One family friend says she was ‘always the apple of his eye’ — and they even share the same birthday.

William Hill has her at 14-1 to lift the glitterball trophy. But will Gordon’s mini-me get the judges reaching for their ten paddles?

COOKING UP A SPECIAL BOND

Her elder siblings are Megan, 23, a recent graduate who is working at Freuds PR agency, and twins Holly and Jack, 21. Baby brother Oscar is only two years old.

Jack has joined the Royal Marines and Holly is making her way as a podcaster and model. Both Tilly’s sisters posted supportive messages on Instagram once the Strictly news was announced, with Megan writing, ‘Go Tills’ and Holly writing, ‘Go Princess!’ 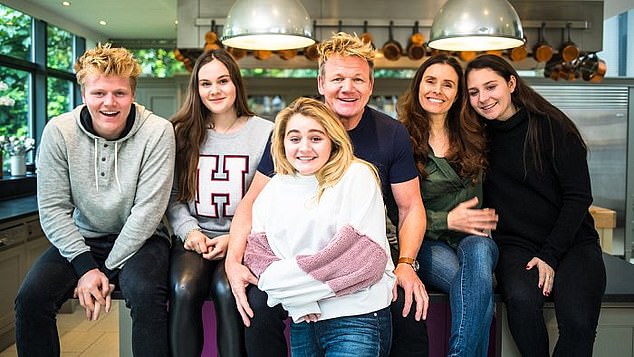 Pictured: Tilly (centre) with her parents and three of her four siblings

Tilly said that cooking was how she found her voice in the family and managed to be noticed. ‘There’s no point in shouting in my family. It’s impossible to get heard.’

DAD’S TV SIDEKICK SINCE SHE WAS 4

Tilly’s first TV appearance came on Gordon’s show The F Word when she was four. She then appeared in various episodes of Hell’s Kitchen and was on Junior MasterChef in 2015, aged 14.

Her CBBC show Matilda And The Ramsay Bunch ran between 2015 and 2019 and was a ratings success.

The shows were only 15 minutes long and many of them revolved around family holidays and other events rather than being only about cooking.

Tilly said: ‘When I was little, I often went with Dad when he was filming. I loved watching him. I realised it was something I could do.

‘People would come into the kitchen and I’d be cooking up something and they started trying out my food and they loved it.’ 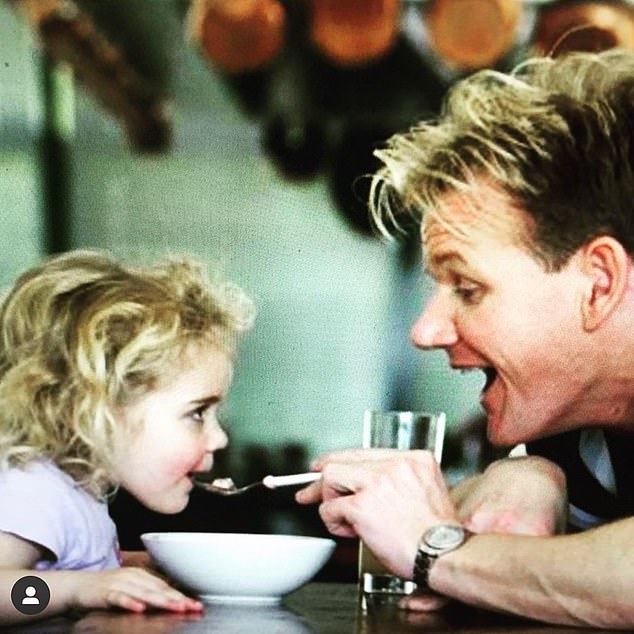 Tilly’s first TV appearance came on Gordon’s show The F Word when she was four. She then appeared in various episodes of Hell’s Kitchen and was on Junior MasterChef in 2015, aged 14

One episode in LA was notable for showing Gordon Ramsay crying when he thought he’d lost Tilly. She and Jack were doing a two-and-a-half-mile swim off the coast of Los Angeles, with Gordon and mum Tana waiting on the beach. Jack reappeared after an hour and 25 minutes, without his sister.

Gordon said: ‘I felt helpless, so scared. I just looked at my wife Tana and we burst into tears. There was a search-and-rescue team out there in the water. Panic set in. I thought we’d lost Tilly. I thought, ‘God, what have I done? Why did I let her go?’ ‘ Luckily, Tilly reappeared, having been body-surfing in the waves.

Her recipe book Tilly’s Kitchen Takeover came out in May 2017. Doting Gordon even once added a ‘Tilly’ menu in his Bread Street Kitchen restaurants.

Gordon has told his children that they won’t be bankrolled by his £160 million fortune — which he plans to spend or give away — but must work to support themselves. Nor will he give them jobs in his restaurants.

He has said, though, that he will always back them. ‘I’m firm, I’m fair and I will give you everything I’ve got to get you to the very top.’

A friend said: ‘I’ve never had a sense from any of them that they want to be famous for the sake of it. But you can choose to embrace the opportunities that will make you well-known — and she has embraced them.’

HOTFOOTING IT IN HOTEL

Gordon is well-known for being sporty, taking part in Ironman competitions, and had a trial for Rangers football team as a young man.

Tilly is keen on sport, too. She said: ‘I tried dancing when I was younger — ballet and stuff — but I wasn’t very good so I moved to football camp.’

In July this year she travelled to Australia, quarantining for ten days before taking part in a MasterChef competition. Complaining of boredom, she walked a marathon in her hotel room, which took ten hours and 19 minutes.

She said of the family: ‘We love doing sport and we often train together. I think it keeps us together and strong. My mum and dad are very good at organising family time.’

BRING ON GLITZ AND SEQUINS!

Tilly’s followers believe she will give it her all on Strictly, not just on the dancing front but in treating it as entertainment. She has commented: ‘Bring on the glitz, glamour and sequins!’

But will there be murder on the dancefloor if famously harsh judge Craig Revel Horwood dishes out one of his thumping ‘three’ scores to the young Ms Ramsay?

His fellow judges on the show — Anton, Motsi and Shirley — must be shaking in their pointy shoes at the thought of protective dad Gordon getting involved . . .

THE QUEEN OF QUARANTINE

Tilly finished her A levels in the summer of 2020 and spent quarantine with Gordon and the family, mostly in Cornwall.

They arrived at his £4 million home in Trebetherick three days before lockdown started. Tilly’s then-boyfriend Seth was with them for much of it. 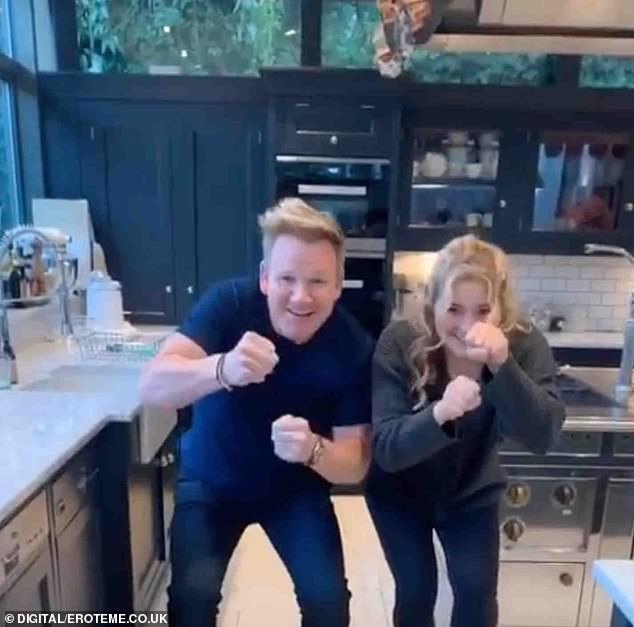 In quarantine, Tilly started making almost daily videos on TikTok, often of her and Gordon singing or dancing in the kitchen

She started making almost daily videos on TikTok, often of her and Gordon singing or dancing in the kitchen. These have been hugely successful.

She was originally pencilled in to appear in last year’s Strictly but broke her arm.

A friend says: ‘Tilly didn’t wake up one day and say I want to be famous — she’s been around it all her life.’

There has always been a special bond between Gordon and Tilly, who was born on her dad’s 35th birthday in 2001 and was his youngest child until the arrival of baby Oscar when she was 17.

She described herself in an interview as ‘definitely a Daddy’s girl’ and on Father’s Day she wrote on Instagram: ‘I couldn’t ask for a better dad and best friend . . . I don’t know where I’d be without you.’

In a video message this week, Gordon said: ‘Wishing you all the very best. Proud of you girl.’ Mum Tana added: ‘Glad it’s her and not you [Gordon]. Tilly you’re incredibly brave. Good luck.’ 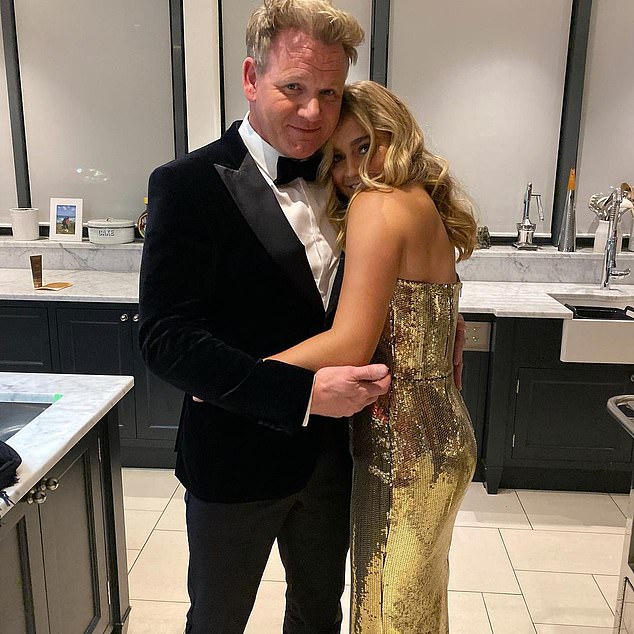 There has always been a special bond between Gordon and Tilly, who was born on her dad’s 35th birthday in 2001

Gordon enjoys teasing his daughter, posting a video of her singing off-key, then asking her head teacher for a selfie (which got him banned from parents’ evening) and ribbing her about boys constantly. The feeling is mutual.

Tilly informed her father she will change her surname if she goes into cookery. She said: ‘I tell him I prefer Mum’s cooking to his, just to wind him up. But actually I really do like her bolognese sauce best. Dad’s is just too fancy.’

In an interview, Gordon asked her: ‘What’s it like being the daughter of the best chef in the world?’ She shot back: ‘Jamie Oliver’s not my dad!’

HOLIDAY’S WITH THE BECKHAMS 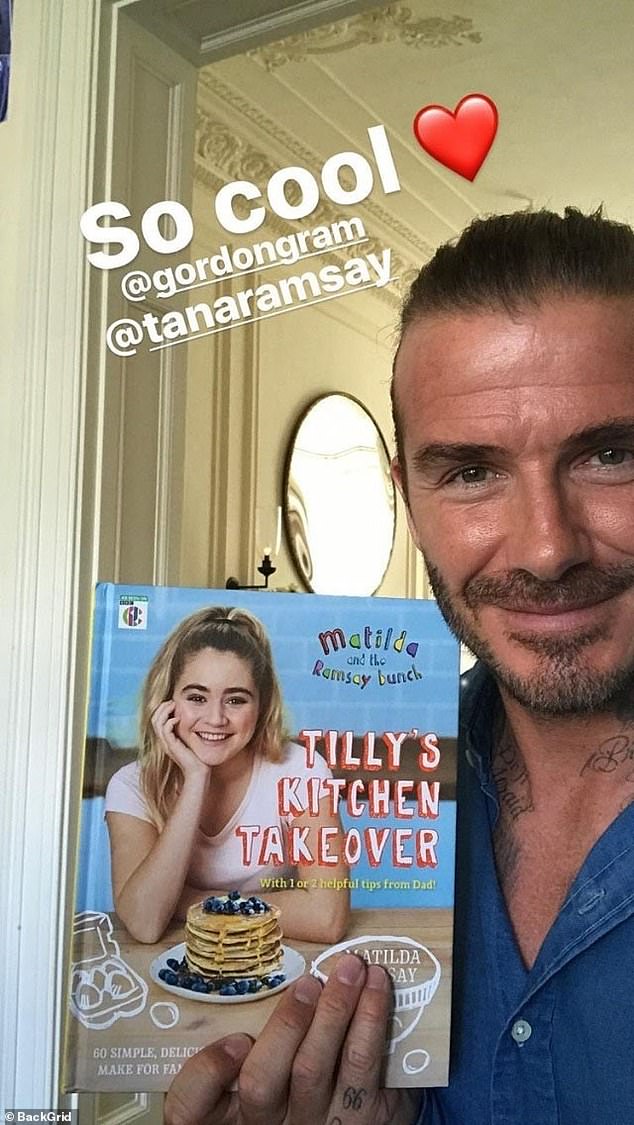 All the Ramsay children are close to the Beckham brood — the two families holiday together. Pictured: David Beckham holds Tilly’s cookbook

All the Ramsay children are close to the Beckham brood — the two families holiday together. Gordon jokes that they have been ‘banned’ from dating each other.

Tilly is also good friends with chef Gino D’Acampo’s two boys, Luciano and Rocco, and pranked her father into thinking that she and Luciano were dating when Luciano called his father from Gordon’s restaurant, Heddon Street Kitchen.

Seeing Tilly with him, Gordon yelped: ‘What the hell?’ and Luciano said: ‘Gordon, we’re on a date. We’ve gone out for dinner.’ She is, however, single.

Tilly has been earning her own crust for some time. She appeared in the British Airways advert celebrating 100 years of flying and also appeared in a campaign to promote flu jabs at Boots.

Her 18th birthday party was lavish even by Ramsay standards. Held at The Cuckoo Club in London, there was a 007 theme and Tilly’s face was plastered all over the food and drinks.

Ed Sheeran played a five-song set, apparently as a favour to Gordon. It’s estimated there wouldn’t have been much change from £100,000.

3 Aug 19
Kevin Clifton, 36, took to Instagram to open up about his last day performing in…
Celebrities
0 7 Sep 21
As we discussed, there have been three major stories about Prince Charles this summer, and…
Celebrities
0

27 Oct 20
Over the past few months, we've learned quite a lot about Leah Messer. Some of…
Celebrities
0