After a late night out at Paris Fashion Week in February 2016, the designer, model and oil heiress Nats Getty begrudgingly stumbled out of bed to go to the airport to pick up the fashion “muse” of her brother, the designer August Getty, for his upcoming show.

“She was bubbly and laughing, and it was so infectious,” Ms. Getty said. “The moment I saw her, I was instantly a thousand times happier than I was the second before.” 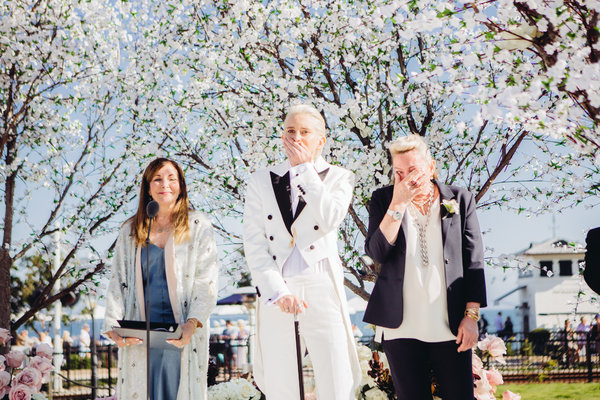 Over the next two weeks, a smitten Ms. Getty spent every day of the trip with Ms. Lazzarato and her friends. Eventually, she convinced Ms. Lazzarato to split off from the rest of the group; they tried on clothes at Balmain, and, the next day they ordered crepes from a nearby cafe. Upon returning home to Los Angeles, the pair started dating, and Ms. Getty soon became a fixture of Ms. Lazzarato’s popular YouTube and Instagram accounts.

“I truly believe that you find love when you’re not looking for it, and that’s exactly what happened,” said Ms. Lazzarato. “I wasn’t looking for anyone to date, let alone fall in love with, but it just so happened that my best friend’s sister is the one for me.”

At the time, Ms. Getty, 26, had recently been through two failed relationships and felt “broken down” and “hurt” by some in her life who seemed intent on tearing down her ambition as a model and designer. But in Ms. Lazzarato, she found someone who accepted her for who she was and what she wanted to be.

“I was trying to live an authentic lifestyle, and I just didn’t have it in me — I felt a lot of shame,” Ms. Getty said. “The moment I had Gigi in my life, I had the perfect example of what it is to be an authentic person living your true life, to love yourself and be proud of who you are no matter what.”

Ms. Getty’s mother, Ariadne Getty, a granddaughter of oil tycoon J. Paul Getty, recalls how withdrawn Nats had become before the trip to Paris. She said now is the first time her daughter has experienced a truly loving and affectionate relationship.

“I really believe that they both would be misunderstood by anybody else,” she said. “They’ve found their safe space together.”

Ms. Lazzarato, 27, documented her gender transition on her YouTube channel. In the videos, which racked up millions of views, Ms. Lazzarato revealed many of the details about her plastic surgeries and hormone treatments with a characteristic good-natured irreverence.

One topic that was difficult for her to share, however, was the couple’s attempt to become pregnant last year. After initially being unable to conceive, the couple consulted a fertility specialist, and Ms. Lazzarato tapered off her estrogen treatments in hopes of increasing her sperm count. Ms. Getty fully supported her partner’s decision, even as changing her hormone therapy affected her both physically and emotionally.

“Being on hormones regularly for so many years, it was hard to go off of them,” said Ms. Lazzarato. “There were high and lows, some little waves and some tsunamis.”

After months on the new program, her sperm count remained too low to undergo in vitro fertilization, which would have allowed the couple to freeze a fertilized embryo and begin a pregnancy at a later date. Ms. Lazzarato announced on her channel in December that she's gone back to her normal estrogen regimen and that the couple is considering adoption.

“Nats has been very accepting,” she said of that decision. “She’s helped me so much through every struggle I’ve been through.”

The couple’s openness about their relationship and their support for each another have made them role models for many in the L.G.B.T.Q. community. They’ve also worked closely with advocacy organizations including Glaad, the Los Angeles LGBT Center and the Ariadne Getty Foundation, headed by Ms. Getty’s mother.

“Their story is such an important story,” said the elder Ms. Getty. “It takes tremendous courage to come out as gay or transgender, and by living their life in the public eye as much as they do, they give people courage and hope.”

Last year, when the couple was back in Paris for fashion week, Ms. Getty told Ms. Lazzarato that she had scheduled a photo shoot for the two of them. “I know that might sound crazy dramatic to some people, but that’s kind of just how we live,” said Ms. Lazzarato. The two boarded a chartered helicopter to a chateau in the French countryside, which was the inspiration for the Palace of Versailles.

“When I saw the candles, I knew exactly what was happening,” Ms. Lazzarato said. “I was like, ‘Oh my God, how clueless could I have been?’”

On March 1, 2018, Ms. Getty led Ms. Lazzarato into the royal garden and asked her to marry her. She said yes, and as the couple began walking back inside, a firework a display filled the night sky.

“In my eyes, Gigi is a princess, so I wanted to give her a complete fairy-tale engagement,” said Ms. Getty.

You can experience the engagement yourself, on Ms. Lazzarato’s YouTube page, of course.

The couple set a date for the wedding in July at the newly constructed Rosewood Miramar Beach hotel in Montecito, Calif. As they began planning, the couple asked their celebrity wedding planner Mindy Weiss to officiate the ceremony. Ms. Weiss had never presided over a wedding ceremony before, but she already had her civil celebrant’s license in case an officiant ever failed to show at a wedding at which she was in charge.

“We felt this connection with Mindy and thought, ‘Why have a stranger up there?’” said Ms. Lazzarato. “When we asked her, she started crying and was like, ‘Oh my God, no one’s ever asked me to do this.’”

Ms. Lazzarato selected a custom-made flowing white dress by Michael Costello, who also designed her bridesmaids’ dresses. Ms. Getty designed her white suit and tailcoat jacket with her own fashion line, Strike Oil, as well as the suits for her bridal party.

The month before the ceremony at the couple’s bridal shower, an accident nearly upset their plans.

“I was sitting outside and bouncing Gigi on my knees as if she were a baby and singing a song at her — just being stupid,” Ms. Getty said. “We both completely fell on my knee and I heard and felt it pop.”

Undeterred by the injury, Ms. Getty opted to wait to have surgery until after the wedding. Instead, she found a black and silver cane to aid her down the aisle. “Besides, I feel like the cane looked really good with the suit,” she said.

On July 12, about 220 guests gathered for the ceremony at the Rosewood Miramar Beach lawn overlooking the Santa Barbara Channel. White and pink rose petals adorned the altar. A chair was left empty at the front of the audience in remembrance of Ms. Lazzarato’s mother, Judith, who died seven years ago after a leukemia diagnosis.

A violinist performed Celine Dion’s “Because You Loved Me” as Ms. Lazzarato’s father, David Lazzarato, walked her down the aisle. At first she was overwhelmed by cheers as guests scrambled to capture the moment on their phones. But then, as she caught the first glimpse of her new bride, she began to both cry and laugh.

“I vow to be yours forever, and I vow to be your person,” Ms. Getty said to Ms. Lazzarato as they stood on the altar. “Gigi, the definition of love is what I feel for you. I vow that will never change. Baby, I love you, and thank you for choosing me.”

Midway through Ms. Lazzarato’s vows to Ms. Getty, the Union Pacific Railroad, which runs along the coast through the resort, briefly interrupted the ceremony. After a minute or so, the train passed, the guests cheered and Ms. Lazzarato continued her vows.

The couple exchanged rings, sealed their marriage with a kiss and were pronounced Gigi and Nats Getty.

Makeup and Hair Ms. Lazzarato’s makeup was styled by Hilary Montez and her hair by Irinel de León. Ms. Getty’s hair was styled by Frankie Payne.

Toast Gov. Gavin Newsom of California, who is a close friend of the Getty family and Nats Getty’s godfather, recorded a video toast for the newlyweds. “I’m proud of you and I’m proud of Gigi,” Mr. Newsom said. “I’m also proud to be in a state like California that did its part to punch above its weight to lead the way. It’s a point of pride, and it’s my privilege to wish you happily ever after.”

Another Toast Katy Perry and Orlando Bloom, who are recently engaged, also recorded a toast to the newlyweds. “We just wanted to wish you all the best in the world for your wedding and for the decision you made to basically go through hell!” Ms. Perry said, jokingly. “But at least you’re going to have someone to go through it together and be your mirror and call you out and keep you grounded. That’s the most important thing.” And then, Mr. Bloom: “Show us how it’s done.” 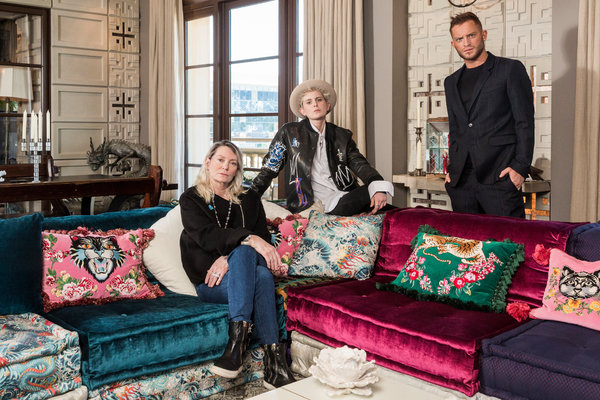 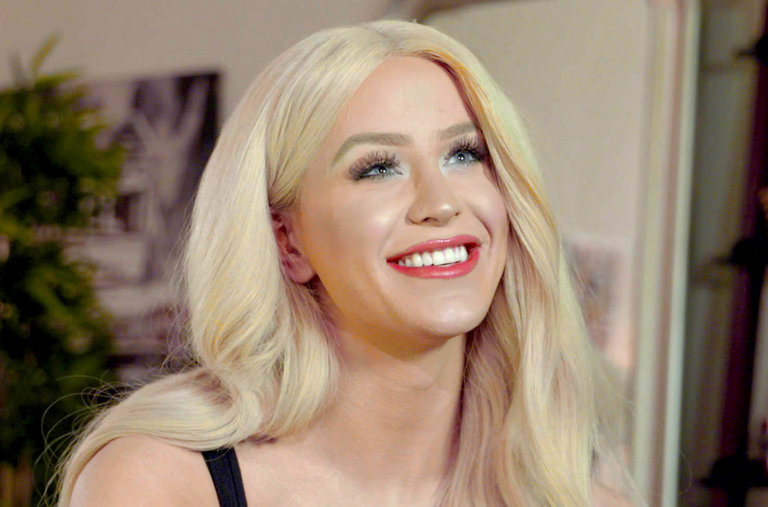 3 May 20
Kara Keough is mourning the death of her father, Matt Keough, less than one month…
Celebrities
0 12 May 22
Bella Hadid is proving herself to be a style chameleon. Yesterday, the supermodel and Kin…
Celebrities
0