As the end credits of Aziz Ansari’s new Netflix stand-up comedy special began to scroll on my TV screen, I reached for my phone, opened Twitter and searched the comedian’s name. I had made a conscious effort to watch the special, titled Right Now, in a vacuum, free from any distractions. I was curious to see how Ansari’s special was being received, unsure if I’d find an array of reactions.

Instead, I found two main sides sparring with one another, jockeying for clout in the form of retweets and likes. The comments (many of them from men) that came down strongly to one side or the other received the most engagement—people who either thought Ansari should be celebrated for making a comeback, or condemned for daring to continue performing stand-up comedy.

Sometimes our so-called “cancellation culture” is good, like when it comes to legitimate monsters like Harvey Weinstein. But in the case of Aziz Ansari, whose gray-area #MeToo scandal could have been a real teaching moment, the polarizing social media reaction is stifling men’s ability to grow.

Right Now is Ansari’s first major return to the public eye after becoming mired in a 2018 sexual misconduct controversy amid the #MeToo movement. Ansari was the subject of a story on the website Babe titled “I went on a date with Aziz Ansari. It turned into the worst night of my life.” The story, which was attributed to a single anonymous source and ran without comment from Ansari, detailed cringe-inducing allegations against Ansari, including that he “physically pulled her hand toward his penis throughout the night.” The article also accuses Ansari of missing multiple “verbal and nonverbal cues” that indicated his date (who goes by the pseudonym Grace) was “uncomfortable and distressed.” 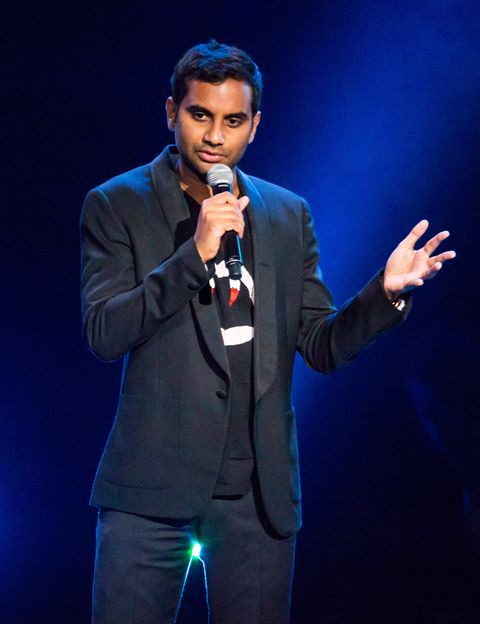 Up until this point, the #MeToo movement had focused on abusers whose alleged actions had little-to-no gray area: Harvey Weinstein, Bill O’Reilly, Larry Nassar, Kevin Spacey, Louis C.K., and Roy Moore, among others. But with Ansari, the situation seemed more complex. A majority of men would read the Weinstein allegations and recoil in disgust; it was clear that his behavior was appalling. But with Ansari’s story, the actions were perhaps more relatable to men (and women) who had been on similar dates. (It’s also worth noting that Ansari expressed support for #MeToo and that he took Babe reporter Katie Way’s “words to heart” the day after the article was published.)

In the mea culpa that kicks off Right Now, Ansari talks about a friend who examined his own behavior after the Babe story came out. “He was like, ‘You know what, man? That whole thing made me think about every date I’ve ever been on,'” Ansari tells the crowd. “And I thought, ‘Wow. Well, that’s pretty incredible. It’s made not just me, but other people be more thoughtful, and that’s a good thing.'”

When I first read the Babe story in 2018, I remember hoping that tons of men would have the same revelation as Ansari’s friend. But when I checked Twitter after watching Right Now, the majority of the reactions were either “he sucks!” or “he’s the best!”—and in a time when men have a shit ton of growing to do, none of it felt particularly productive, if you ask me. Social media does a lot of good, but it also pressures people into adopting polarizing opinions.

In Right Now, Ansari references a news story in which Pizza Hut delivered a pepperoni pizza that had pepperonis arranged to look like a swastika. As Ansari recounts, the online reaction to the controversy was swift and polarizing, with some condemning the swastika pizza and others who claimed it was a gross misunderstanding. Ansari polls the audience on the incident, asking them to clap if they thought the pizza looked like a swastika. Several audience members clap that it did, and a few others clap that it didn’t. Ansari even singles out an audience member who clapped, asking whether the man saw the photo of the pizza in the New York Times or Washington Post. The man says he saw the photo in the Post.

There’s only one problem: Ansari reveals that he completely fabricated the swastika pizza story. It never actually happened.

“I’m not trying to embarrass you, dude, but you and everyone that clapped earlier, you’re the fucking problem,” Ansari says to rapturous laughter. “You think your opinion’s so valuable you need to chime in on shit that doesn’t even exist?”

I actually agree with Ansari on that point. More than ever, there’s a societal pressure to “chime in on shit” and align yourself along increasingly entrenched ideological lines, contributing to a dialogue that’s less concerned with growth and understanding than it is with winning.

So then how do we win? At the end of his special, Ansari tells the audience that “the old Aziz … is dead.” It’s delivered as a gut-wrenching line, expressing the profound personal toll of his public humiliation. But, as he’s obviously still very much alive, it represented to me that maybe this old, problematic Aziz had to die in order for this new enlightened Aziz to move forward. And isn’t that the kind of growth all men should be striving to achieve? It’ll take trading the comfort of the mob for true introspection for that to happen. 13 Oct 22
Drama has already unfolded before the festivities have even begun at the National Television Awards,…
Celebrities
0