Blake Lively and Ryan Reynolds are taking a break from their usual trolling ways to be, well, just about the most genuinely sweet couple you could imagine.

On Friday night, Blake and Ryan ventured out of their house for a rare date night in New York City, where the 33-year-old actress turned her 44-year-old husband into a ball of childlike wonder and enthusiasm by taking him to his very first Home Run Derby at Yankee Stadium.

“Blake took me to my first home run derby at @yankees stadium tonight,” Ryan explained in the caption of his Instagram post about the date. “They won 10 to nothing. I’m not saying I’m a good luck charm. Just saying @clintfrazierr wants me to play left field for the remainder of my life. (The Red Thunder was an absolute hero tonight) ⚾️.”

In addition to the gushing caption summarizing the night, Ryan also shared two photos from the evening on his Instagram grid: first, a sweet selfie of him and Blake at the game, in which she leans into to him and is wearing what may be the world’s comfiest sweater, and second, a picture of a hat autographed to him (well, technically to the Green Lantern, but still) by Clint Frazier, aka “Red Thunder.”

Ryan also shared a couple of pictures from the night on his Instagram Story: 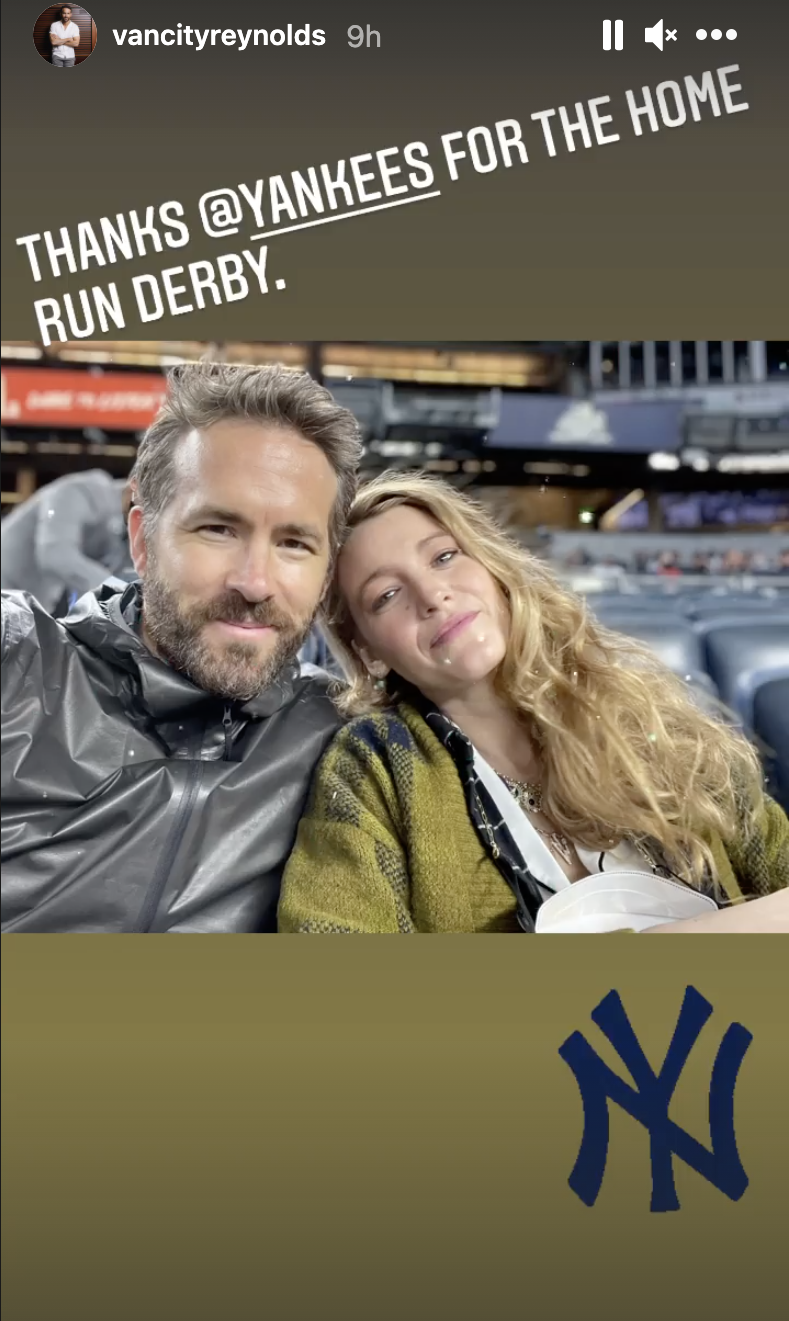 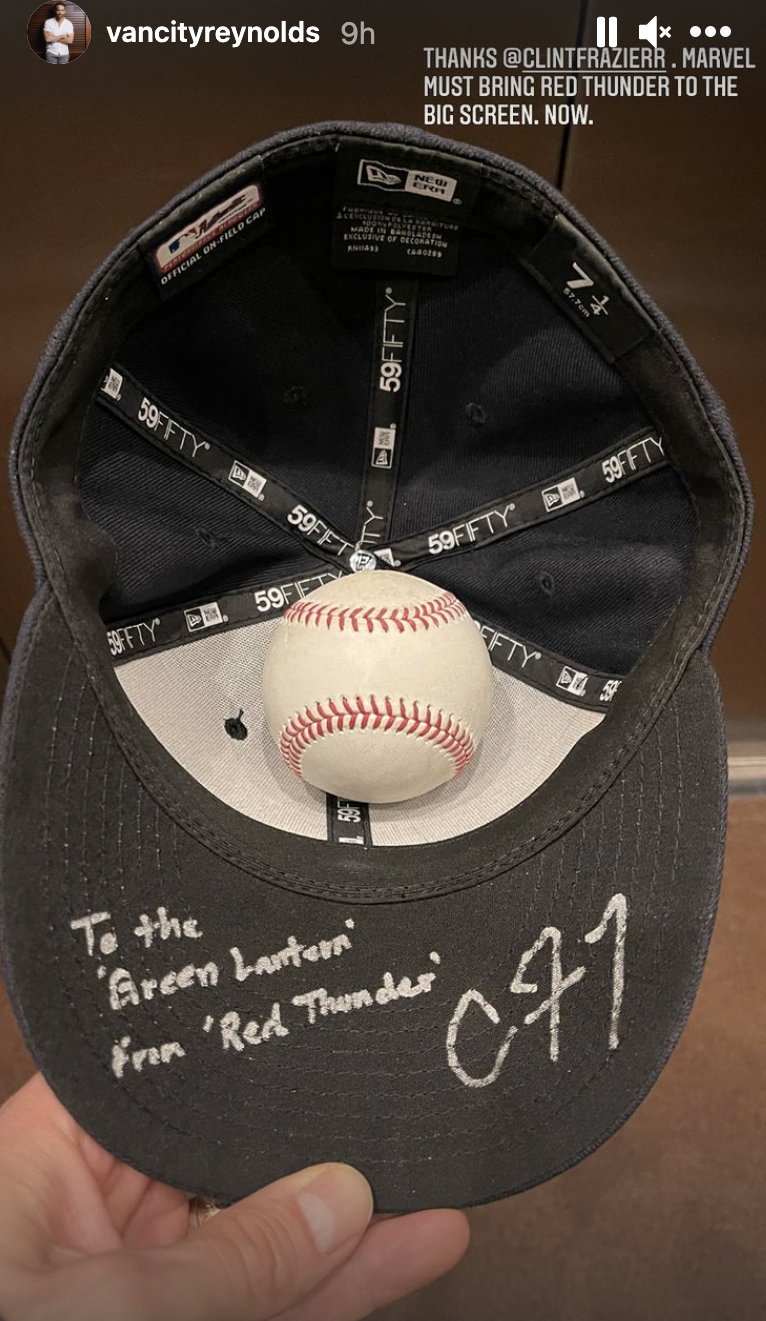 This wasn’t one-sided adorableness, though. Blake also shared a post about the date night on her grid that included three pictures from the evening—a shot of her posing in a Yankee hat, a picture of her and Ryan holding their new Yankee hats (his signed by Red Thunder, of course), and a sweet, goofy selfie of her own from the stands.

“Mom&Dad Girl Summer. Thanks @clintfrazierr for being my personal stylist,” she wrote in the post’s caption. “This hat is a vast improvement from the 💩 I showed up in. After 14 years in NY, I think tonight made me an official Yankee… ⚾️🍎.”

Blake also documented the night out on her Instagram Story, beginning with pointing out how rare it is that she left the house at all. “2021 revelations: I know how to put on not pajamas,” she wrote in a post that included tags crediting some of the designers behind her ~look~ (minus that comfy sweater I’m still coveting, tragically): 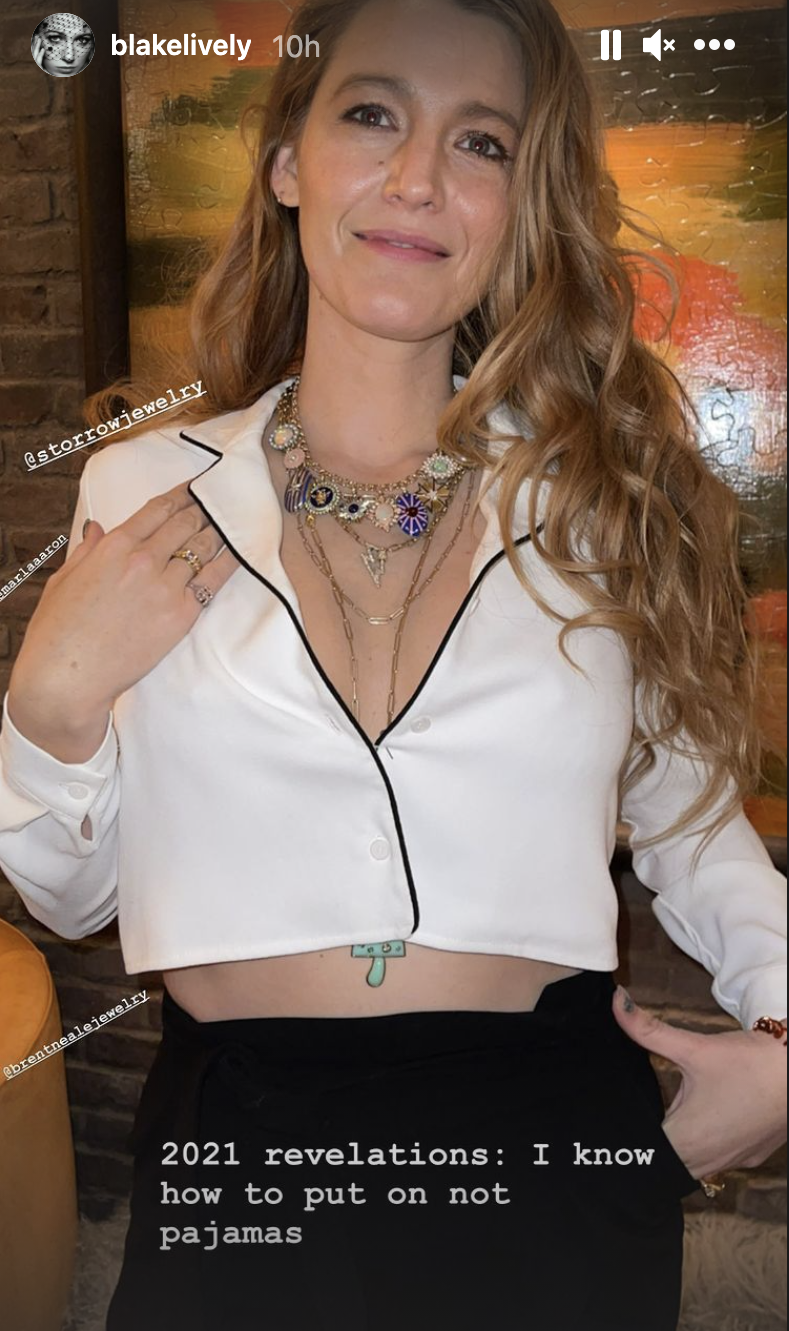 Next came a post highlighting the real guests of honor: Her epically-manicured nails. “Fully flat Stanley-ing my nails everywhere I go,” she wrote. 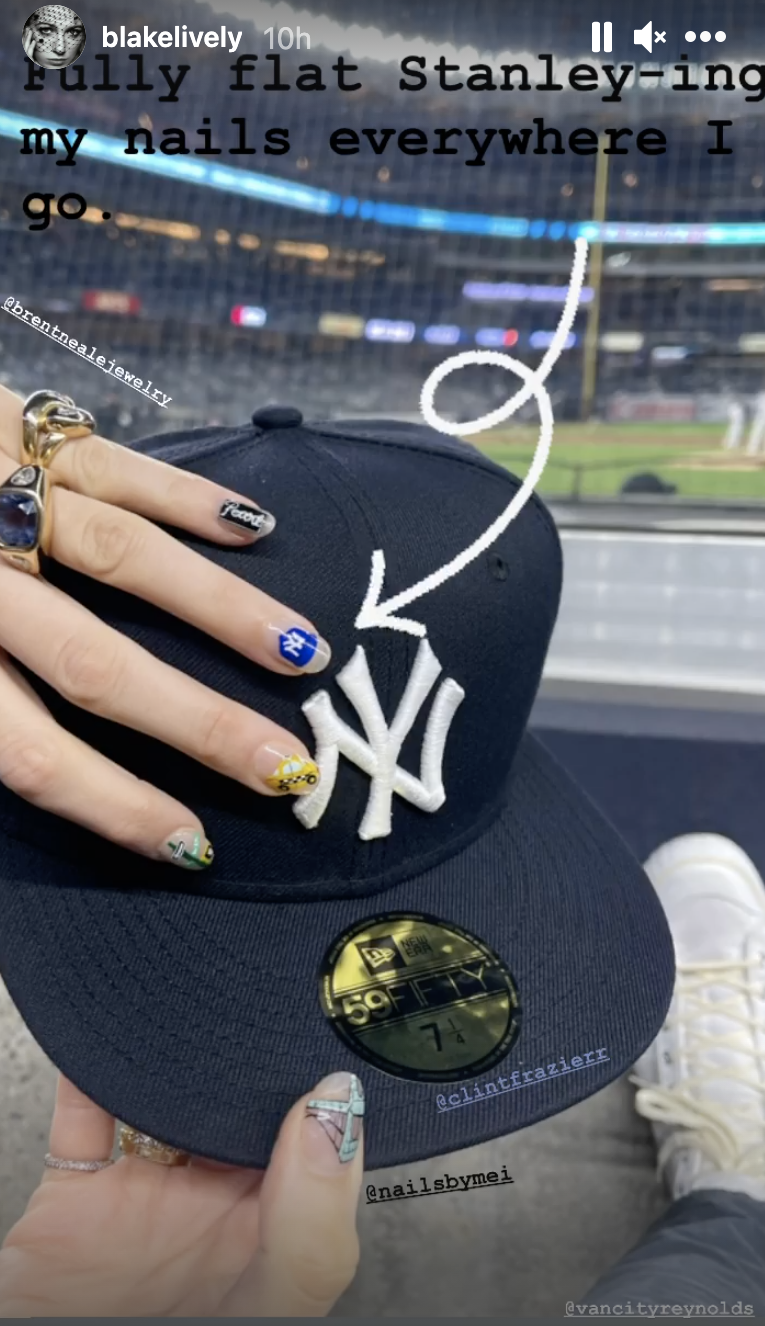 Okay, make that several posts highlighting the manicure (courtesy of straight up *artist* Mei Kawajiri, aka Nails by Mei): 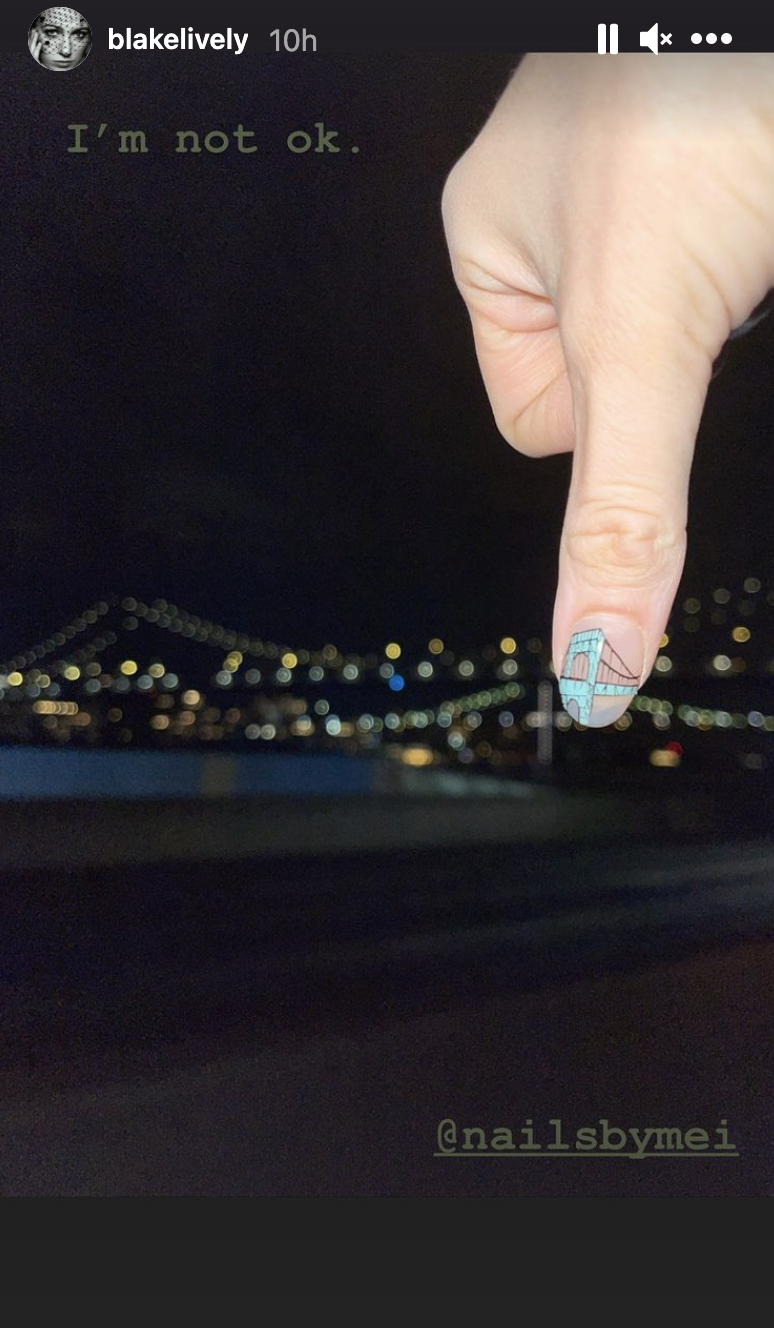 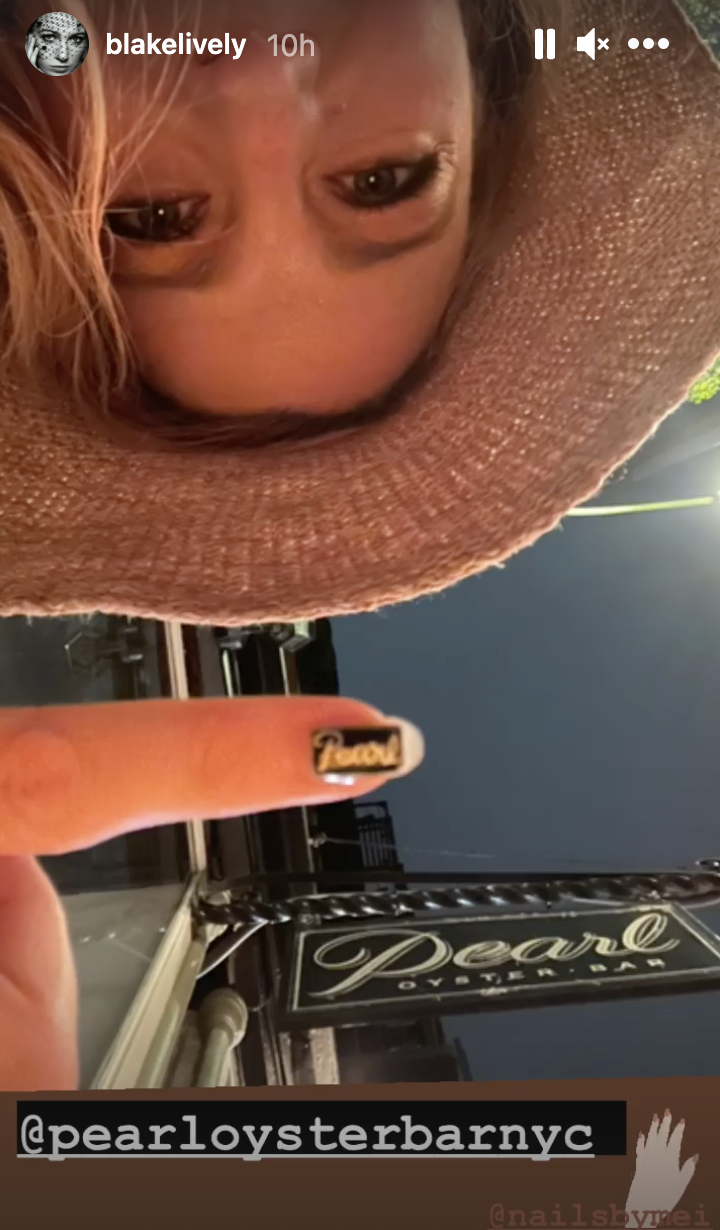 She did take a short break from her nail art parade to share another picture of her and Ryan at the Home Run Derby: 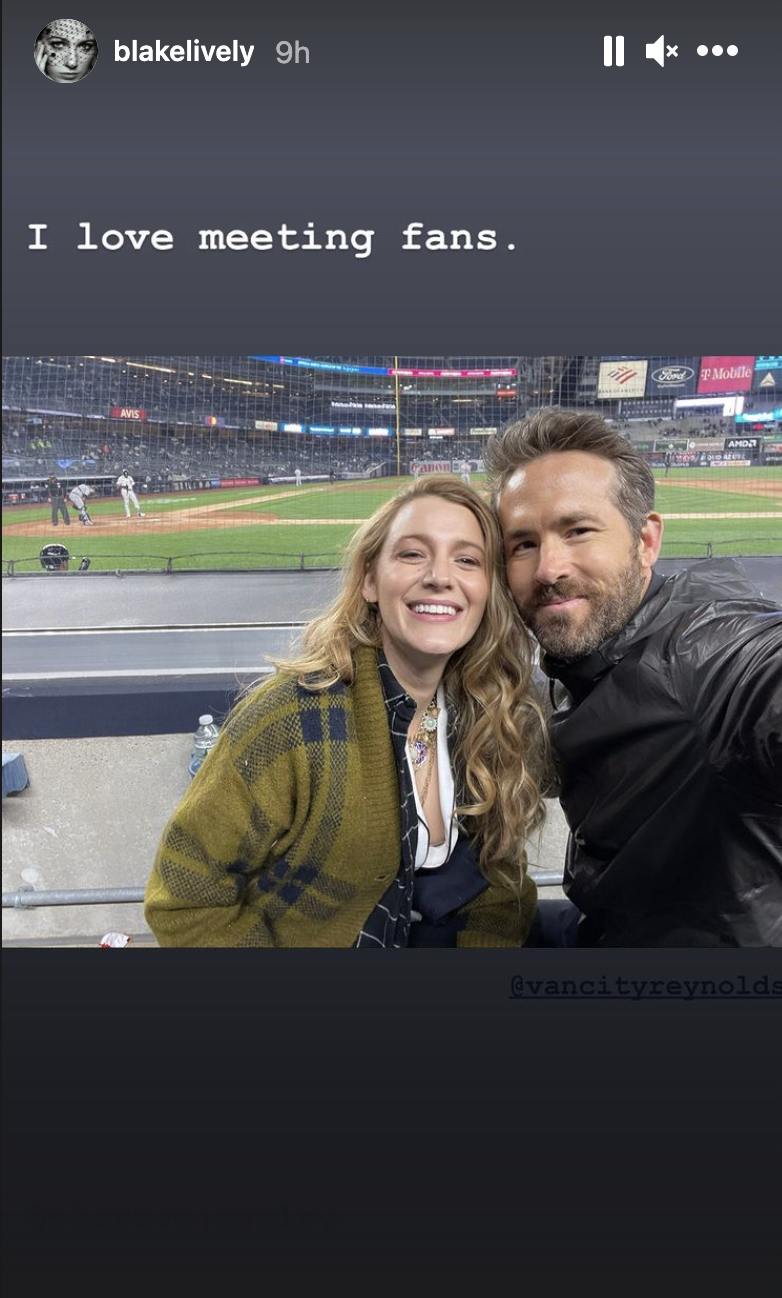 Turns out Blake couldn’t quite make it through the night without some IG trolling, though. In this case, she turned the troll gaze inward, poking fun at herself in another post about her NYC nail tour. 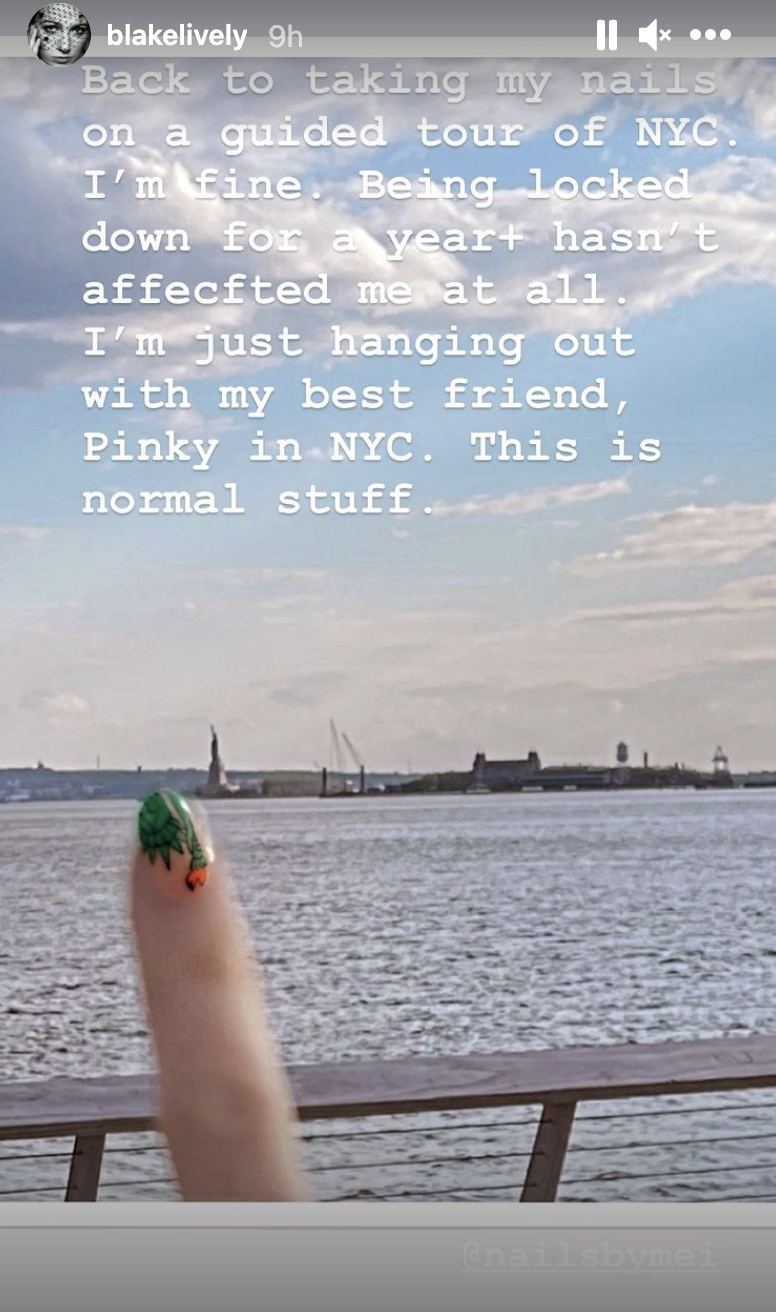 “Back to taking my nails on a guided tour of NYC. I’m fine,” she wrote. “Being locked down for a year+ hasn’t affected me at all. I’m just hanging out with my best friend, Pinky, in NYC. This is normal stuff.”

“I left the house and documented it,” she captioned her final post from the night. “Phew. That was fun. Maybe I’ll do it again next year…” 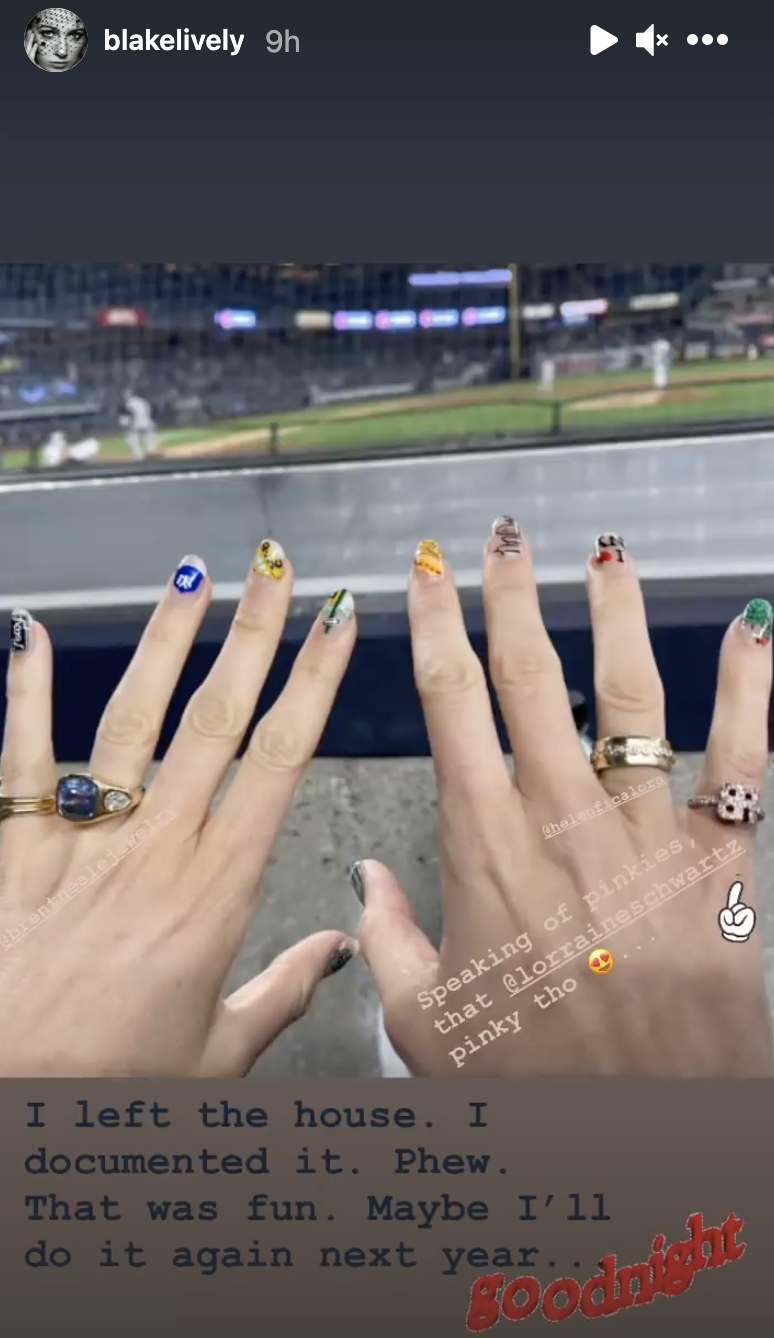 Yes, definitely leave your house again, Blake. And if you and Ryan are looking for ideas for date night 2022, I have a bottle of Aviation gin, a very cute dog, and way too many board games (and am totally willing to send reference pics for the manicure). Just saying…

From: Marie Claire US