BTS is celebrating the release of Map of the Soul: 7 by taking over New York City. Apart from appearing on the Today show and the Tonight Show Starring Jimmy Fallon, the group is debuting a new ad in the middle of Times Square. The same day BTS dropped MOTS: 7 on Feb. 21, fans got their first look at BTS’ 2020 Hyundai ad and they’re bursting with excitement over the group’s latest commercial.

BTS has worked with Hyundai Motors on several occasions. In 2018, the group became global ambassadors for the company and arrived at that year’s Billboard Music Awards in the Hyundai Palisade. Just a few weeks ago, the group also took Hyundai’s NEXO SUV to the 2020 Grammy Awards on Jan. 26.

Ahead of the release of MOTS: 7, the company revealed fans can expect another collaboration between Hyundai and BTS. Hyundai teased a massive Times Square ad starring BTS that would debut at 1535 Broadway in New York City at 7 p.m. on Feb. 21.

The event was another addition to BTS’ NYC takeover on Friday. To go along with the group’s album arrival, they stopped by the Today show live in Rockefeller Plaza to talk about their new album. Since many of BTS’ fans were already in NYC that day for the Today show, they didn’t need to travel far to see BTS’ Hyundai ad debut live in person.

BTS’ Hyundai ad did not disappoint fans on Times Square on Friday, Feb. 21. Like BTS’ other social campaigns of the past — such as the Starbucks BTS drink that benefitted South Korea’s Beautiful Foundation — the Hyundai ad has a purpose to inspire others for the greater good. BTS’ members used their own messages tied with imagery of the natural world, and it’s just as dreamy as any ARMY would hope.

Following its Times Square debut, the ad is making its way around Twitter, showing each member with landscapes such as the sea, a snowy woodland, a sky full of fluffy clouds, the sun, the rain, the stars, and a lush forest. BTS’ quotes are unique, sincere messages, followed by the affirmation that these things in life and nature are "because of you," as a part of Hyundai’s "Because of You" brand campaign. Each BTS member writes their message in Korean with a white marker, while it’s translated into English on the left side of the screen.

BTS’ Hyundai ad begins with Jungkook’s message about the sea. "Like the endless waves, our possibilities are infinite," he writes.

V’s message reads, "Just like the first snowfall, the world is full of unexpected moments."

The dreamiest of all of the scenes might be Jin’s, as he’s shown walking through clouds. "Like the sky living with the cloud, moon and stars, we are more beautiful together," he writes.

J-Hope’s message is inspired by the sun: "Just like the bright sun, may our future shine brilliantly."

RM’s takes on the rain, with the message, "After the rain washes everything away, a clean world awaits."

Suga’s message is about the stars: "Like countless stars lighting up the universe, our future lights up when we come together."

And last, but not least, Jimin’s message is all about forests: "For rest, our rest comes from forests."

The end of the ad brings the seven members together, with a picture of them posing by a Hyundai, decked out in white suits. 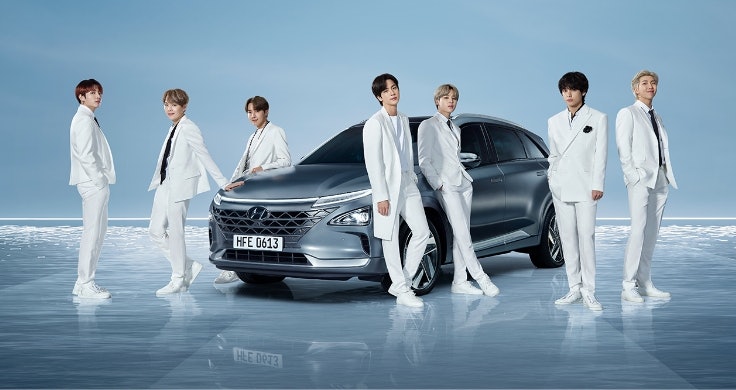 The Hyundai campaign with BTS hopes to bring cleaner and more sustainable energy to the attention of the public, in support of its Hyundai NEXO hydrogen fuel cell vehicle. Its clean mobility technology offers a car that emits pure H2O.

BTS inspires their listeners through music and incredible artistry, but they clearly aren’t shy about using their influence for important environmental causes, either, which is just another reason ARMYs love the K-pop giants.

It's been *checks watch* a little more than two months since Channing Tatum and Jessie J started dating again, but...