Celebrities who supported Gavin Newsom amid the recent recall election in California took to Twitter to react to his big win on Tuesday.

A majority of Californians have voted no – meaning against removing Newsom from office – in the recall election for the embattled first-term Democratic governor. Putting an end to conservative talk radio host Larry Elder’s hopes at overtaking his seat.

Newsom, who was overwhelmingly elected governor in 2018 in the heavily blue state, was facing a recall drive sparked last year mainly over accusations that he mishandled his state’s response to the coronavirus, the worst pandemic to strike the globe in a century.

He was heavily favored in the recall election by Hollywood celebrities, many of whom took to social media as results of the election were pouring in. 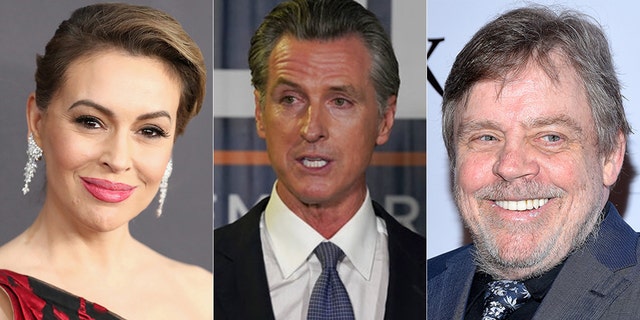 “Oh, and now can we just put this “recall” notion to bed forever?” added Elijah Wood.

“[email protected] our Governor! Any “votes” for @larryelder weren’t even counted. There was no need,” wrote “Community” actress Yvette Nicole Brown.

“Hey @larryelder I dare your a– to say this loss by 30%+ was rigged. Just go for it, Homeslice. Ride that train ALL the way into Crazytown and whatnot,” added George Wallace.

“I’m loving what I’m hearing so far. If things continue like this, big win for Newsom. And big kick in the a– to Trumpism,” wrote Rob Reiner.

“Dear Newsom: this doesn’t mean we like you it means we like our kids,” wrote a still unsatisfied Devon Sawa.

“CONGRATULATIONS GOV. GAVIN NEWSOM and your landslide victory! You crushed it.   Another huge loss for Trump and Republicans. The American people do not want these hateful idiots in charge of anything. Gavin – keep moving California forward! Your state is the progressive leader!” wrote filmmaker Michael Moore.

“Congrats to Governor Gavin Newsom and First Partner Jennifer Siebel Newsom on their HUGE election win. THIS is the “radical change” we need: keeping unqualified Trump clones out of office, no matter who supports them,” added actress and activist Alyssa Milano.

Questlove, meanwhile, commented on the immense tax expense that the recall election cost.

“but also WTF with all the tax money wasted on this farce of a recall. this gonna keep happening and happening?” he wrote.