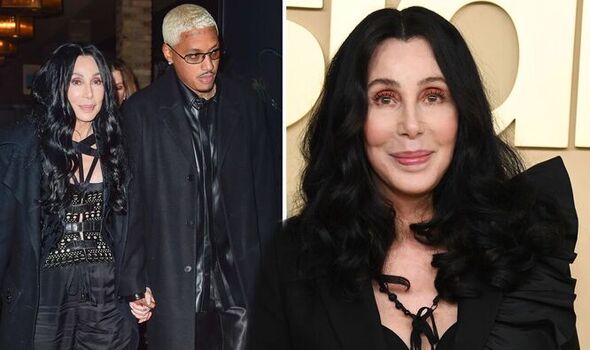 Cher, 76, has admitted dating 36-year-old Alexander ‘A.E’ Edwards, who is 40 years her younger, admits their age gap looks “strange on paper,” but claimed “love doesn’t math”. The couple sparked dating rumours earlier this month when they were seen walking hand-in-hand to a restaurant in Hollywood.

They have since confirmed their romance on social media and are not bothered by what people think.

In Cher’s latest post however, the singer admitted their relationship seemed strange when you look at their ages.

She wrote on Twitter: “On paper this looks strange (Even 2 ME) A.E says [love] doesn’t know math.”

The Do You Believe hitmaker went on to respond to her fans who urged her not to worry about what others think.

Steph wrote: “Babe, ENJOY IT!!! You are an absolute legend and any man would be lucky to have you.

“A.E. is one lucky guy and it sounds like he knows it, so just go with it and enjoy, we only get one life!”

Another asked Cher what she admired about A.E, to which she replied: “He’s kind, smart, hilarious and we [kiss] like teenagers.”

Cher recently defended their age gap after sparking some criticism.

On November 6, she shared a picture of the music producer on her page alongside a love heart emoji.

The post was met with mixed comments from her fans, but it was one reply in particular that she didn’t like.

Twitter user Georgette Hohl said she was “immediately suspicious of his intentions” towards Cher after finding out they were together.

She added: “We know you are fabulous and I’m sure your inner circle will continue to have your back.

“Want you to be happy, but not taken advantage of!!!”

Hitting back, Cher said: “As we all know – I WASN’T BORN YESTERDAY & what I know for sure… there are no guarantees.

“Anytime you make a choice you take a chance. I’ve always taken chances… It’s WHO I Am.”

After the same Twitter user said it “would be naive” not to question his intention, Cher continued to hit back, writing: “Haven’t You Got Anything Else 2 Do?(sic)

A.E is a rapper and music businessman who is signed to Tyga’s label Last Kings.

He has a three-year-old son named Slash Electric Alexander Edwards with Amber Rose, who he split from last year.

Ahead of meeting her new man, Cher is thought to have been single for many years. 1 Sep 21
So much for a Brown out. Following many weeks' worth of chatter and speculation over…
Celebrities
0 11 Apr 22
TMZ may collect a share of sales or other compensation from links on this page.…
Celebrities
0 18 Feb 22
In her statement, the Puerto Rican model expresses her gratitude to the lingerie company for…
Celebrities
0