Aside from the costume, the ‘I Don’t Do Drugs’ songstress steals attention at the annual music awards by wearing a red chair headpiece and chicken-feet shoes.

AceShowbiz –Doja Cat has become the latest meme on the internet. Having worn a “worm” outfit at the 2021 MTV Video Music Awards, the “Need to Know” singer found herself being roasted by people on Twitter.

The Grammy-winning artist wore the yellow and blue costume when accepting the Best Collaboration award for her song “Kiss Me More” featuring SZA. In her acceptance speech, she said, “I never thought I’d be dressed as a worm accepting an award.”

Pictures of Doja donning the outfit have since made their way on the blue-bird platform. “Doja Cat wasn’t lying when she said she looked like a worm #VMAs,” one person tweeted alongside photos of her and Heimlich from “A Bug’s Life”. Another added, “Doja cat reminded me of the worm episode in [George Lopez].”

A third then placed her snap right next to the Alaskan Bull Worm from “SpongeBob SquarePants” and penned, “Doja wearing this season’s Alaskan Bull Worm.” Another person, meanwhile, tweeted, “I have the same sleeping bag.” Someone else echoed the sentiment, “doja cat is cosplaying me in a sleeping bag when i was 12.” 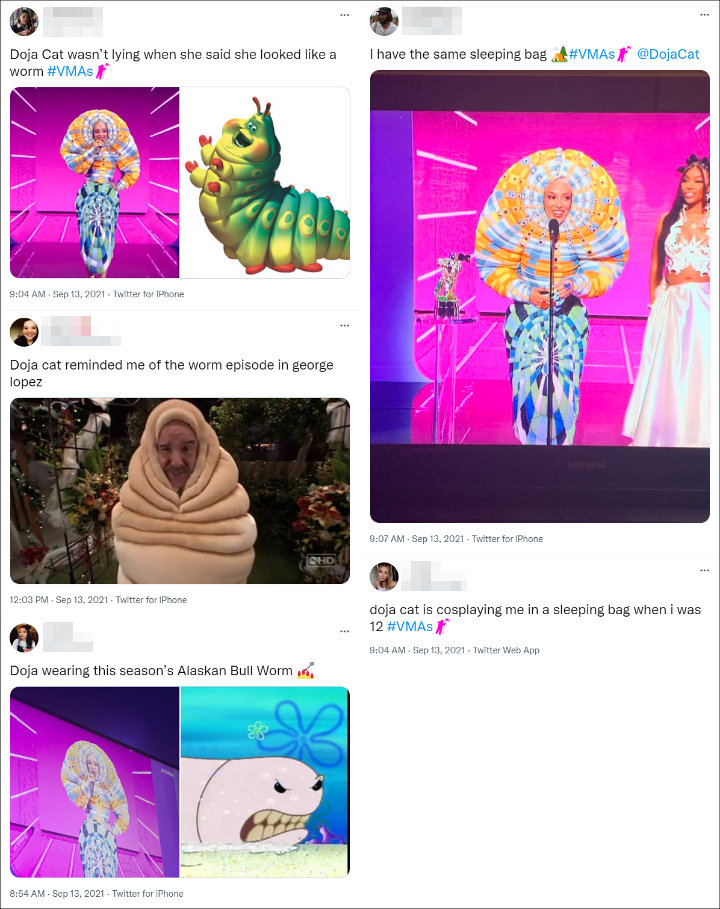 Doja Cat has turned into memes.

Aside from the “worm” costume, Doja turned heads at the Sunday, September 12 event by wearing a red chair headpiece when hosting the show. Not stopping there, the “Say So” hitmaker stole attention with her chicken-feet shoes.

That aside, Doja has more things to celebrate in addition to winning Best Collaboration. The singer/rapper also nabbed Best Art Direction for “Best Friend” featuring Saweetie at this year’s awards show.

As for artists who came out as the biggest winners of the night, they were Lil Nas X, Olivia Rodrigo and BTS (Bangtan Boys). Each of them brought home three Moon Persons with Nas X winning the night’s biggest award, Video of the Year, for “MONTERO (Call Me By Your Name)” 11 Oct 21
McFly star Harry Judd has become a dad for a third time with his wife,…
Celebrities
0

21 Jul 20
Meet the cast of the upcoming new series Julie and the Phantoms! The new musical…
Celebrities
0

10 May 20
Brandy Norwood has recruited Chance The Rapper for a brand-new single, "Baby Mama," in honor…
Celebrities
0