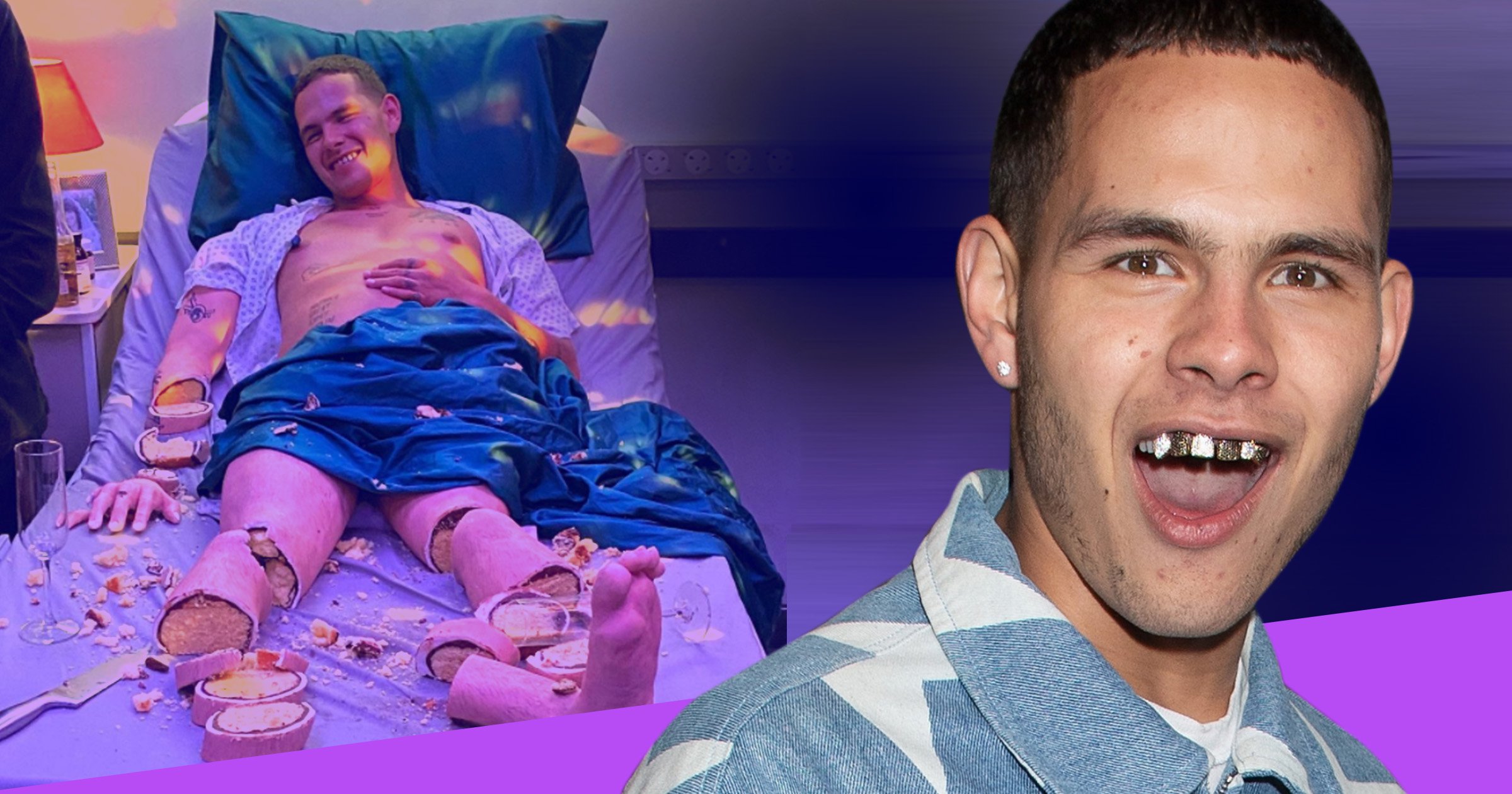 The ‘everything is cake’ stage of lockdown made us lose all trust in reality – and guess what? Those happy days are back again.

Behind the scenes pictures from Slowthai’s 2020 video for Feel Away have been released, showing the rapper lying in a hospital bed.

Except only half of it is Slowthai. The rest is cake. Yes, everything is cake, including Mercury Prize-nominated Slowthai.

In the video, the 26-year-old, real name Tyron Frampton, swaps places with his girlfriend in a maternity ward, so that he is the pregnant one about to give birth.

While he pushes in bed, his girlfriend gets engaged and then married to a doctor, and instead of carving up a wedding cake, they take a knife to his limbs which are made out of vanilla cake, and feed the whole wedding party.

At the end, everything goes back to normal… except for the newborn baby, which is also – you guessed it – made out of cake.

Chester-based baker and artist Ben Cullen, also known as The Bakeking, was brought on to make Slowthai’s limbs out of cake for the surreal stunt, and in throwback pictures from the set, he explained how it was made.

Sharing pictures from September, Ben wrote: ‘When I turned @slowthai into CAKE! 🍰Tbt

‘Made for his music video ‘Feel Away’ – all his body parts were made from vanilla cake and chocolate ganache with sugarpaste details!’

While Slowthai’s head and torso were real – like, flesh and bones real – cake limbs were laid out on the hospital bed and sliced up to show the dessert inside.

But on the outside, the limbs looked like, well, limbs, with tattoos and hair and skin, so it’s no wonder people were freaked out in the comments section.

One person wrote: ‘My mom doesn’t believe that it is cake so good job’, while another commented: ‘This is fantastic and creepy at the same time.’

Making a cake look like a real body was no mean feat, and Ben explained that the process took a whole week to get right.

He told Metro.co.uk: ‘All the parts for the Slowthai cake were made over a one week period. Each of the limbs were made entirely from vanilla cake and held together with chocolate ganache. The cakes were then covered with sugar-paste and coloured using edible food colouring and airbrushing.

Ben, 30, was a tattooist before he got into baking, making a novelty cake in 2014 for his dad’s birthday.

He became a full-time cake artist two years later and has earned a reputation for his hyperrealistic illusion cakes, even starring on the Netflix show Extreme Cake Makers.

As for Slowthai, he has survived being chopped up for a wedding party, and released his second album Tyron last month.