Gigi Hadid showed off her amazing post-baby body in NYC on Jan. 11! The model stepped out in a pair of tight high-waist leggings that accentuated her flat stomach — just 4 months after she gave birth!

Gigi Hadid was spotted in New York City looking runway ready on January 11! The supermodel, 25, who was photographed pushing her daughter in a black stroller,  showed off her flat tummy and toned legs in a pair of high-waist black leggings. She exposed her tiny waist in a cropped puffer jacket, as the temperatures were in the mid-30’s in the Big Apple on Monday. The new mom, who returned to work in early December after giving birth in September, is looking awesome after baby! 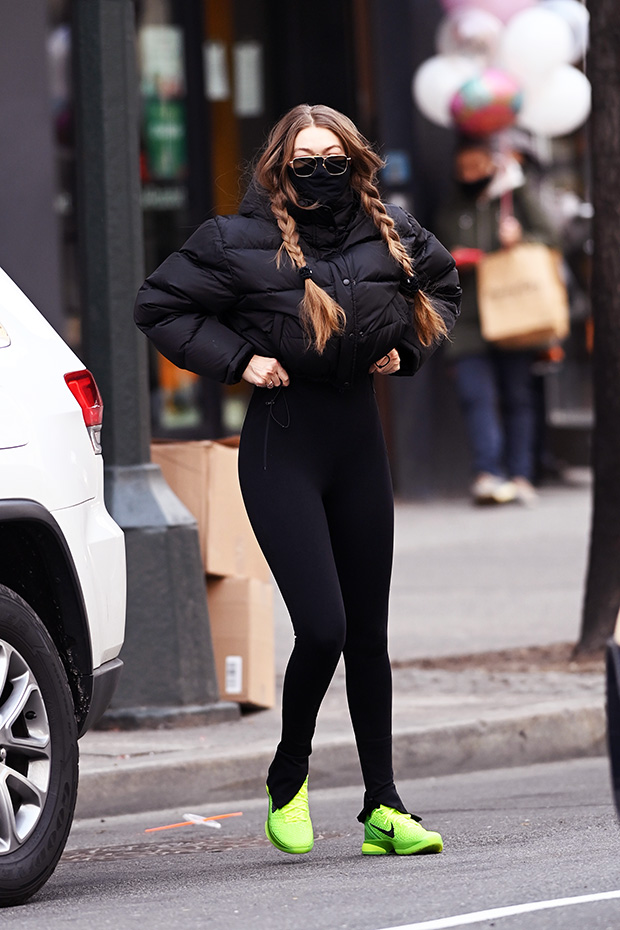 Gigi stepped out in a pair of Kobe 6 “Grinch” green sneakers — a newly-released pair that sneaker-heads know are difficult to cop. Lucky for Gigi, the late Kobe Bryant‘s wife, Vanessa, gifted her a pair, along with a number of her celebrity friends including Kim Kardashian, Ciara and LaLa Anthony. Gigi wore sunglasses and a black scarf over her nose and mouth, which doubled as a face mask. She wore her long brown-blonde locks in two braids. The model was even feeling up to mingling with the paparazzi, whom she greeted with a peace sign. 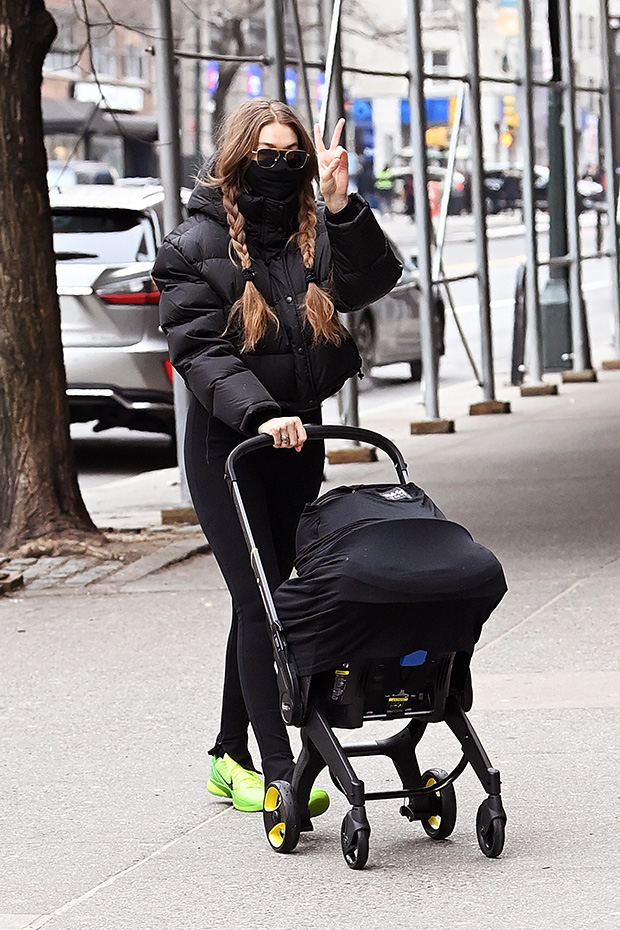 Gigi was most likely in New York City, where she has an apartment, for work. Back in December, she gave fans glimpse into her new balanced life as a working mom. “Would say back to work, BUT bein [sic] a mamma is a job like no otherrrr,” she captioned a silent, filtered Instagram video, adding, “BACK IN THE OFFICE.” Though, it was unclear what she was shooting for at the time. The Victoria’s Secret beauty put her modeling career on hold for the majority of 2020, due to her pregnancy, which she announced in April 2020.

Before she returned to work, Gigi spend most of 2020 in Pennsylvania on her mother Yolanda Hadid‘s farm. It’s believed that she’s currently splitting her time between New York and PA, where she’s been enjoying raising her daughter. Meanwhile, Gigi’s boyfriend and the father of her baby girl Zayn Malik is also hard at work. The former One Direction singer just dropped a sexy new R&B song, “Vibez,” from his forthcoming album Nobody Is Listening.

Gigi and Zayn, who reconciled their on-off relationship in early 2020, are going strong. “Gigi and Zayn have never been happier. They’re both so head over heels in love with their little girl, she really is a dream come true for the whole family,” a source close to the couple recently told HollywoodLife. “Gigi says becoming parents was the best thing that has ever happened to her and Zayn,” the source continued, adding, “It’s given them a common purpose and they’re totally united.”