Nearly three weeks ago, hundreds of middle-aged QAnon fanatics gathered in Dallas to witness the return of John F. Kennedy, Jr. This group believes that JFK Jr. and many other deceased celebrities — including his father, President John F. Kennedy — are not only alive, but part of a decades-long plot to take down a global pedophile cabal that secretly controls the world. Despite multiple no-shows from the former George publisher or his charismatic dad, dozens still haven’t left. In fact, one of the JFK Jr. truthers — a rapper by the name of Pryme Minister — offered the use of his property just outside Dallas, and the group’s Telegram chats indicate some of them have been living communally for weeks.

This Is Where Oliver Stone Got His Loony JFK Conspiracies From

The Private Lives of Liza Minnelli (The Rainbow Ends Here)

This QAnon group in particular is led by a popular conspiracy theory influencer named Michael Protzman, who has prophesied the Kennedys’ return, and organized these gatherings, the latest of which took place on Monday, the anniversary of the assassination of JFK. But this time they’re not the only JFK obsessed conspiracy theorist in Dallas. Just a few block away, at the Magnolia Hotel, about three dozen people gathered for the Ninth Annual JFK Assassination Conference, three days of discussions about the latest evidence and theories regarding autopsies, CIA informants, and links to 9/11.

The conference attendees are what you could call your Oliver Stone JFK Truthers — they believe JFK was assassinated on Nov. 22, 1963, but they don’t believe the Warren Report (which claims Lee Harvey Oswald was the sole shooter and acted alone) and they have a variety of kooky ideas about who did it.

On the sunny but brisk morning, the two distinct conspiracy groups converged. The JFK Assassination Conference folks showed up first and set up an altar in line with the spot where Kennedy was shot. There they gave speeches honoring the fallen president as a handful of guided tour groups passed through the area. They were joined by dozens of members of Protzman’s group, several of them wearing Trump-Kennedy campaign t-shirts, alluding to the notion that JFK Jr. would help Trump return to the White House. The two groups occasionally intermixed, but the majority of Protzman’s followers gathered on a nearby bridge singing songs and waving signs and flags. Each group largely operated as if the other didn’t exist, perhaps because they don’t agree on the fundamental question of whether JFK is still alive.

The Q-pilled crowd’s beliefs about the Kennedy’s are so strange that even Kris Millegan — one of the JFK Assassination Conference speakers who has published books outlining global secret society plots and was given a lifetime achievement award by the conference organizers — thinks they’re being misled. “It’s a psy-op,” Millegan said of the QAnon movement, suggesting that a secret society of nefarious powers was behind it. “If you want to control a conspiracy, you spin on a dime and point at everyone else.” Millegan also said that some people were peddling QAnon theories opportunistically. “People are using it to make money and all kinds of different things.”

Indeed, Potzman, the leader of the Dallas QAnon movement who has been peddling his take on Gematria, a form of Christian numerology, has begun hawking merchandise featuring his online moniker, Negative48. But even if Protzman is just an opportunistic salesman, some of the attendees appear to be true believers in what he’s hawking. Telegram chats and fundraising calls suggest some have dedicated thousands of dollars and weeks of their lives to wait for JFK Jr. in Dallas. 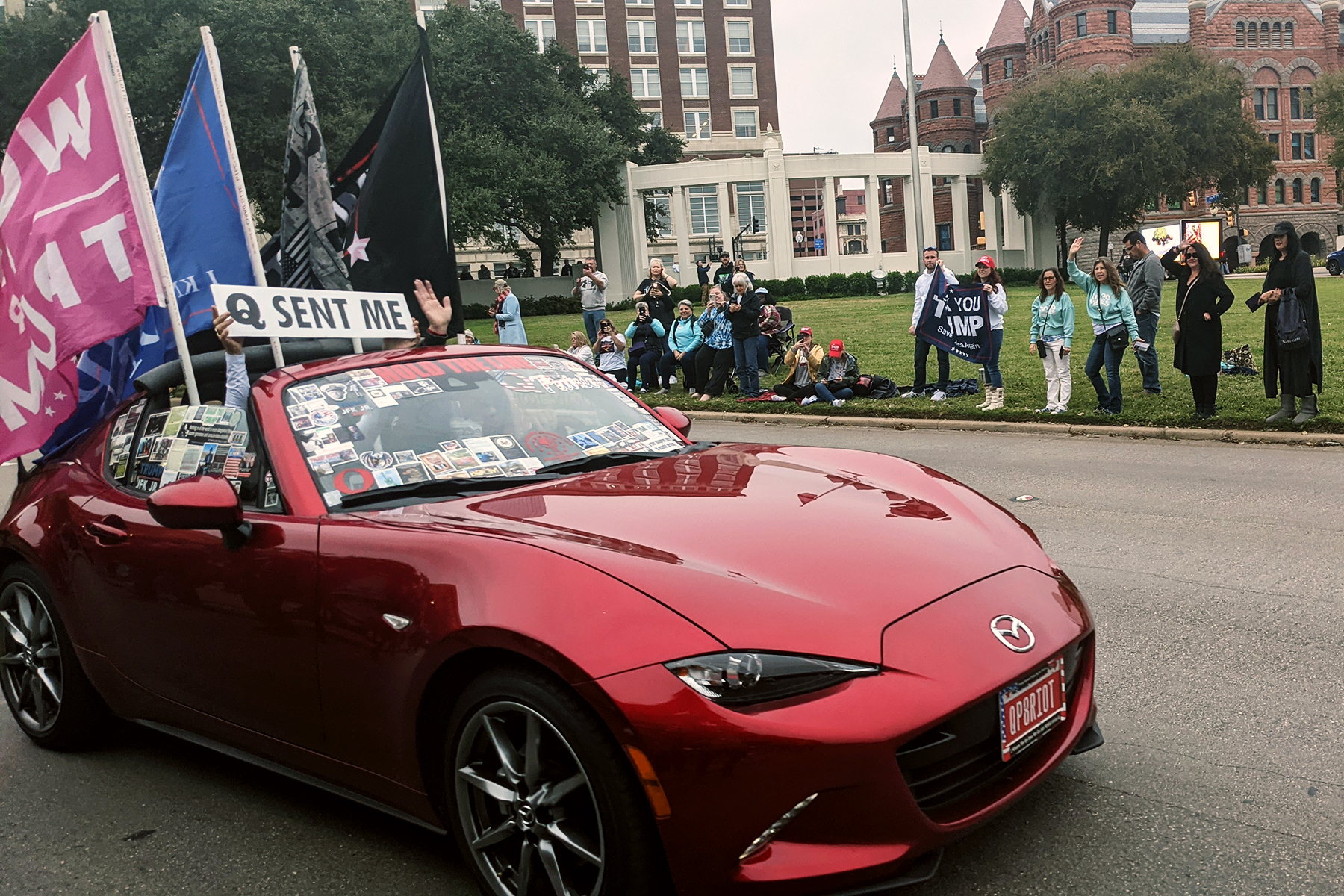 A recent Vice report documented that Protzman has a history of spreading anti-semitic propaganda. In the past few months, he has shared links to extreme right-wing films films that push Nazi and Neo-Nazi talking points on his Telegram channel. “If you haven’t watched the documentary Europa: The Last Battle 2017, here’s the link,” read an Oct. 2 Telegram post. The film is appallingly antisemetic, arguing that Jews are responsible for starting both world wars and frames the Nazis as innocent victims. (He has also shared a link to the film Adolf Hitler: The Greatest Story Never Told.) Protzman did not respond to requests for comment from Vice or Rolling Stone regarding these posts.

In general, Telegram chats affiliated with Negative48 and his followers are rife with highly detailed and bizarre theories about celebrities, medical technology, and the idea that they are all participants in a movie. One popular theory is that the Kennedy family is a part of a bloodline that goes back to Jesus Christ. Most disturbingly, on a recorded video call with Protzman, one of his followers said “We have to experience that physical death to let go of the ego and come out on the other side.” Protzman appeared to agree. “Yeah, yeah,” he said.

Mike Rothschild, an expert on the development of the QAnon movement and author of The Storm Is Upon Us, is particularly concerned about Protzman’s group. “The group of QAnon devotees wandering around Dallas looking for dead celebrities has transitioned almost instantly into something much more like a cult,” Rothschild tells Rolling Stone. “These people have surrendered their will to a crank, who manipulates them with promises of a utopian future and delivers nothing. And their talk increasingly turns to dark ends and ‘physical death’ — a disturbing harbinger of how previous cults have ended.” (Protzman did not respond to a request for comment regarding the video call or Rothschild’s characterizations.)

Not all of Protzman’s followers have remained faithful over the past three weeks. Some disaffected members have taken to Telegram to criticize Protzman and his false promises. “The dates didn’t happen like Gematria said so IDK if it’s what we should go by,” wrote one user. “Unless I misunderstood, didn’t neg 48 say Nov 2nd? That’s why everyone went,” wrote another. “I know, that’s why I spent $3,000 and lost a week of my life,” responded a third.

Meanwhile, families across the country are still wondering if and when their loved ones will leave Dealey Plaza behind them. “My wife has been there since October 31,” wrote one Twitter user. “My brother as well,” responded another.

The persistent presence of the Protzmanians in downtown Dallas is causing an increasing amount of concern among local residents. “I live right by the AT&T Discovery District where [Protzman’s followers] first gathered,” said Dallas resident Isaac Robert. “We saw a tweet and went to check it out for a good laugh, but I walked away concerned and shocked. I hate that they’re still here and that Dallas has to be associated with that. If a cult leader can make a guarantee that doesn’t come true and people still passionately follow him, he could tell them to do literally anything and they would. That kind of power in thehands is terrifying and dangerous for local residents.”

The simultaneous presence of an entirely separate Kennedy-obsessed conspiracy theory community throws Protzman’s sect into even starker relief. No matter how outlandish some of the beliefs on offer at the JFK Assassination Conference may be —  for example, that 9/11 was a mass murder ritual run by a Luciferian cabal — in comparison the QAnon clique, attendees of the JFK Assassination Conference seem rather tame. After all, they haven’t decided to set up a commune in the Dallas area and await the end-of-days at Dealey Plaza. And were it not for their convergence with Protzman’s group, their presence in Dallas would likely have gone unnoticed, or at least, would have blended in with the JFK assassination tours that are a regular sight every Nov. 22.

“Being from the Dallas area, I’m used to conspiracy theorists pushing their wild ideas especially around the JFK historical area,” says local rideshare driver and Dallas-Fort Worth native Matthew Fain. “But these new people are even crazier than ever before — and before was bad enough.”

29 Sep 20
The late Princess Diana and her ex-husband, Prince Charles, had a highly photographed relationship —…
Celebrities
0

14 Apr 20
It's been a rough couple of years for Demi Lovato. The low point came in…
Celebrities
0

3 Sep 20
We will use your email address only for sending you newsletters. Please see our Privacy…
Celebrities
0