ICYMI, This Is What Moff Gideon Really Wants From Baby Yoda on The Mandalorian

The sport Mariska Hargitay and her husband are passionate about

Harry Styles is making history in impressive fashion. The 26-year-old singer covers the December issue of Vogue, making him the first-ever solo male cover star of the fashion magazine. Of greater note than the history-making cover itself is what Styles dons on it, a stunning, lace-adorned Gucci gown.

Dresses, Styles says, have been a favorite of his since childhood when he got in costume for a play.

“As a kid I definitely liked fancy dress,” he says. “I was really young, and I wore tights for [the play]. I remember it was crazy to me that I was wearing a pair of tights. And that was maybe where it all kicked off!”

Styles’ sister, Gemma Styles, notes that dressing up was a large part of their childhood, much to her brother’s satisfaction and her annoyance.

“My mum loved to dress us up. I always hated it, and Harry was always quite into it,” she recalls. “She did some really elaborate papier-mâché outfits: She made a giant mug and then painted an atlas on it, and that was Harry being ‘The World Cup.'”

“Harry also had a little dalmatian-dog outfit, a hand-me-down from our closest family friends,” she continues. “He would just spend an inordinate amount of time wearing that outfit. But then Mum dressed me up as Cruella de Vil. She was always looking for any opportunity!” 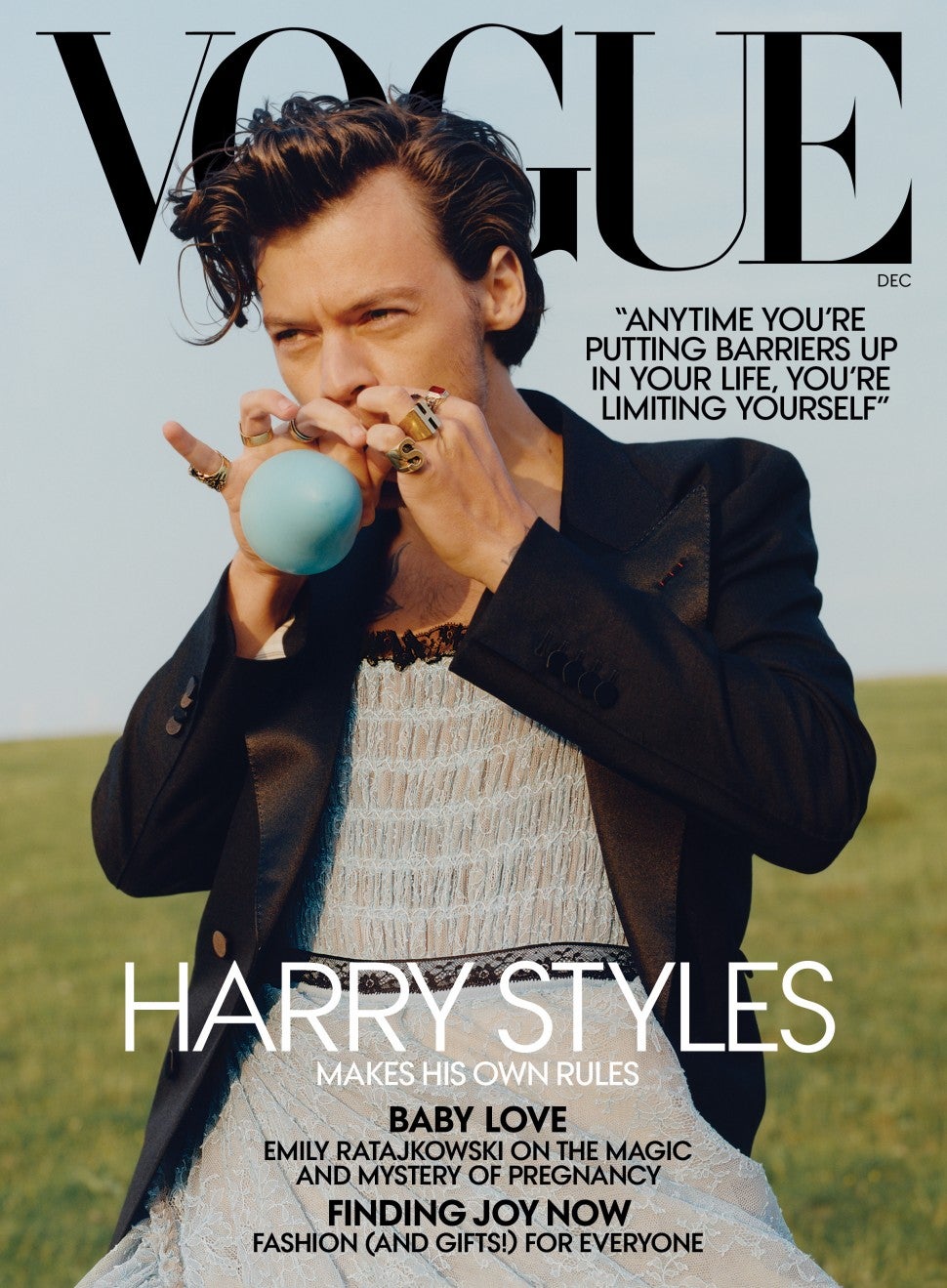 Styles’ love for fashion continued into adulthood, with the singer telling the mag, “I like playing dress-up in general.” That point of view was developed largely thanks to Styles’ friendship and working relationship with his stylist, Harry Lambert.

Now, Styles firmly believes that “you can never be overdressed.” In fact, he says, “there’s no such thing.”

“The people that I looked up to in music — Prince and David Bowie and Elvis and Freddie Mercury and Elton John –they’re such showmen. As a kid it was completely mind-blowing,” he says. “Now I’ll put on something that feels really flamboyant, and I don’t feel crazy wearing it.”

“I think if you get something that you feel amazing in, it’s like a superhero outfit,” Styles continues. “Clothes are there to have fun with and experiment with and play with.”

Styles calls the popularity gender-nonconforming style “really exciting,” adding that “all of these lines are just kind of crumbling away.”

“When you take away ‘There’s clothes for men and there’s clothes for women,’ once you remove any barriers, obviously you open up the arena in which you can play,” he says. “I’ll go in shops sometimes, and I just find myself looking at the women’s clothes thinking they’re amazing.”

“It’s like anything — anytime you’re putting barriers up in your own life, you’re just limiting yourself,” Styles adds. “There’s so much joy to be had in playing with clothes. I’ve never really thought too much about what it means — it just becomes this extended part of creating something.” 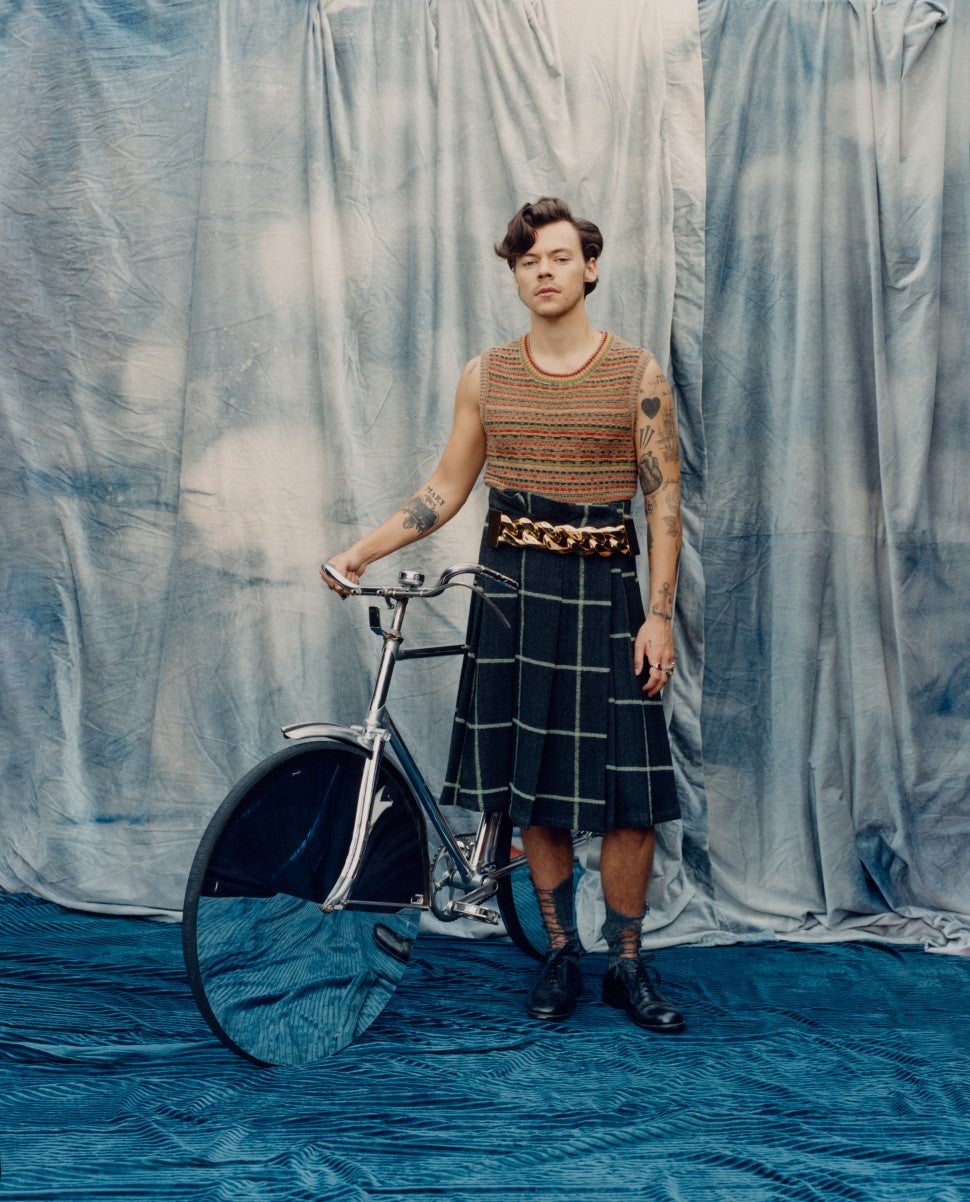 Styles fashion sense didn’t bode well in quarantine, during which he admits he wore “sweatpants constantly.” The “Watermelon Sugar” singer spent his time in isolation with two friends, watching movies and cooking.

“[We] would put names in a hat and plan the week out. If you were Monday, you would choose the movie, dinner, and the activity for that day,” he explains. “I like to make soups, and there was a big array of movies; we went all over the board [from Goodfellas to Clueless].”

The time in quarantine taught Styles “what makes me happy now.”

“It’s such a good example of living in the moment,” he says. “I honestly just like being around my friends. That’s been my biggest takeaway. Just being on my own the whole time, I would have been miserable.”

On top of his time in the kitchen and in front of the TV, Styles has been working on self-growth, especially amid the Black Lives Matter movement and ongoing social justice discussions.

“I think it’s a time for opening up and learning and listening. I’ve been trying to read and educate myself so that in 20 years I’m still doing the right things and taking the right steps,” he says. “I believe in karma, and I think it’s just a time right now where we could use a little more kindness and empathy and patience with people, be a little more prepared to listen and grow.”

Playing the dating game! Larsa Pippen has found herself in many high-profile relationships over the years.Pippen’s longest and most notable...