Jeffrey Dahmer’s father Lionel reflected on a missed chance to uncover his son’s serial killing spree in a never-before-seen interview with Dr Phil released this week.

Between 1978 and 1991, Jeffrey Dahmer raped, murdered and cannibalized 17 young men in Wisconsin and Ohio. He was convicted in 1992 and murdered in prison two years later at the age of 34.

Dahmer’s close bond with his father was portrayed in controversial Netflix series Monster – with Dr Phil airing three-day special, In The Presence of Evil: Face to Face with Jeffrey Dahmer this week, which aims to tell the ‘real story’ of the killer and delve into what made him a monster.

The  1990s interview with Lionel – now 86, shows the father recalling an incident in which Jeffrey deterred him  from opening a wooden box which contained the severed head of Anthony Sears, 26, who was murdered in 1989. 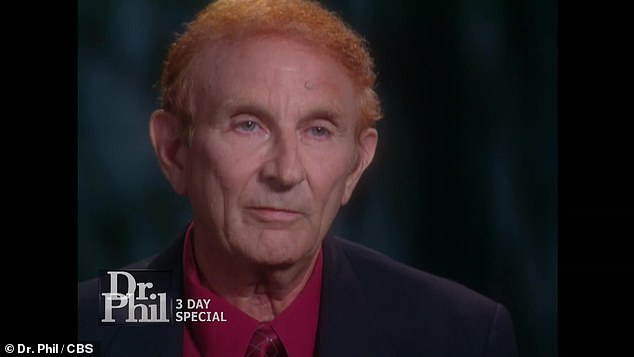 He said of Jeffrey, who was living with his grandmother after leaving the Army, in the clip obtained by TMZ: ‘Several occasions my mother had complained about seeing some pornography  around.

‘So when I made the visit to Milwaukee, I saw this box in the closet in his room and I said “I’m going to open it” and I started going down to the basement to get a tool to open up the box.

‘He kept complaining that he couldn’t even have one foot square of property to do with what he wants and I said “I’m gonna open it up anyway, find out what’s in here” because I thought it was something related to pornography. 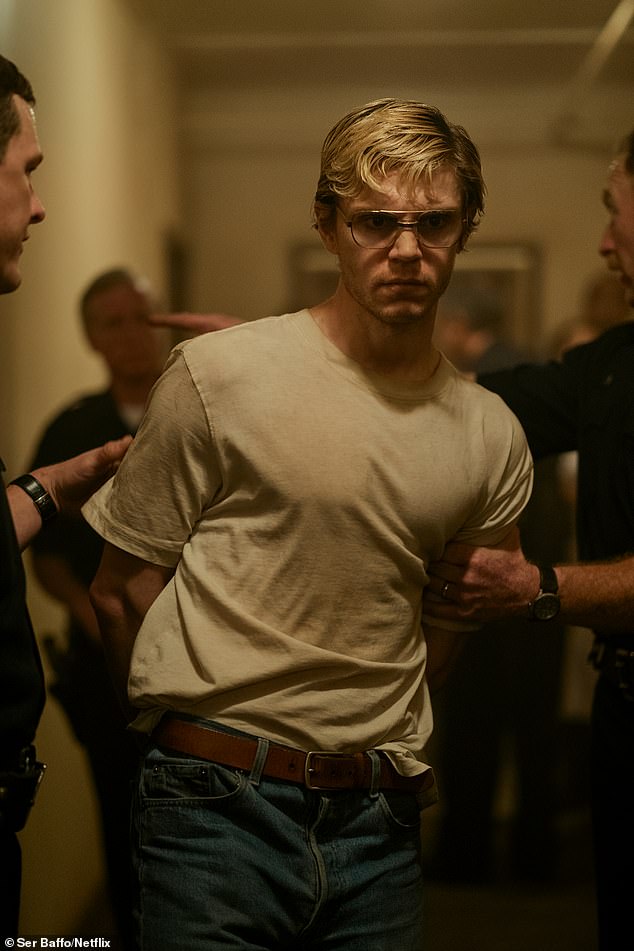 Netflix sensation: Evans Peters played the serial killer in Monster: The Jeffrey Dahmer Story – which was met with backlash from the victims’ families 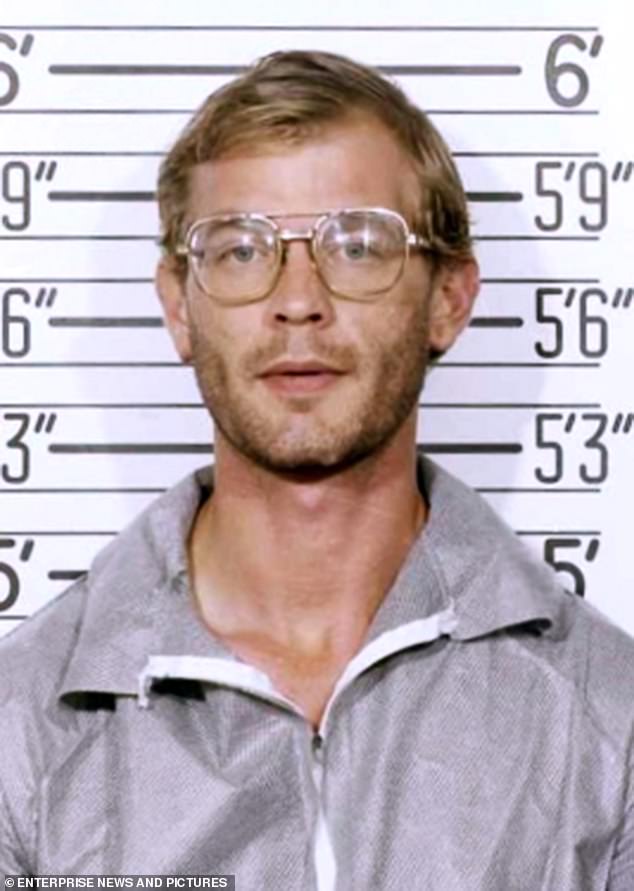 Monster: Between 1978 and 1991, Jeffrey Dahmer raped, murdered and cannibalized 17 young men in Wisconsin and Ohio. He was convicted in 1992 and murdered in prison two years later at the age of 34

‘He convinced me to “wait until tomorrow dad and I’ll open it for you then but just don’t do anything now, I don’t want to disturb grandma.”

‘In a way I’m glad, in a way I’m not glad that I didn’t press it, because if I had opened that box and found what was in there, I think I would have lost it.’

Lionel continued: ‘The next day he opened it and said “you see, this is what it was”, and it was pornographic magazines.’

After the close call and Jeffrey’s incarceration, Lionel said he had discussed the incident with his son.

‘I said “what would you have done Jeff if I had opened it?” and he said something like, “the jig would have been up”, something non-emotional, non-committal. 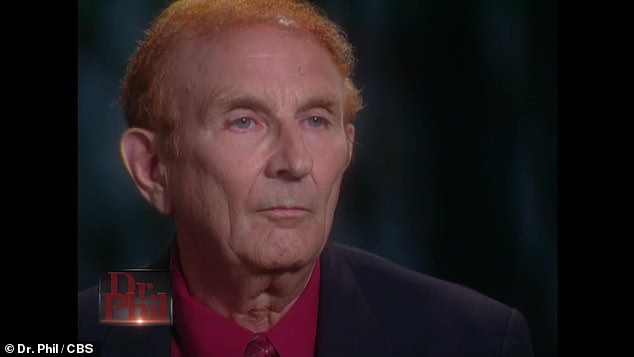 Horror: The resurfaced 1990s interview of Lionel – now 86, shows the father reflecting on an an incident in which Jeffrey deterred him from opening a wooden box which contained the severed head of Anthony Sears, 26, who was murdered in 1989

‘I could have… more lives could’ve been saved.’

The harrowing moment was recreated in the new Netflix series.

When pressed on signs his son was developing dangerous sexual fetishes at a young age, he said: ‘I thought at some point between 12 and 14, coming out of puberty, his sexual engine was in high drive and he was touching the insides of this animal and he sort of got hardwired neurally into connecting the sexual pleasure with this type of activity, entrails, insides, bodies, that’s the way I thought about it after thinking about it for a while.’

Growing up, Jeffrey was fascinated by taxidermy with the father and son often dissecting dead animals together.

Lionel added: ‘At first I couldn’t fathom how he got there, we’re all on a continuum, we all do bad things, we all sin.

‘He was at the extreme of this continuum, I couldn’t at first understand how he could have done those things. I was concentrating on getting him into a psychiatric hospital. I didn’t ask him that specifically

‘But i did say “Jeffrey you’ve got to find out how on earth you could have done these things.”‘

The special – which began airing on CBS on Tuesday, features family members of Dahmer’s victims saying the Ryan Murphy drama ‘re-traumatized them and romanticized the notorious serial killer.’

The first Dr Phil episode focused on Rita Isbell, the sister of victim Erroll Lindsey, 19, who was murdered by Dahmer, in 1991.

The cousin of Errol took to Twitter to slam the new series decision to include the harrowing moment.

Lindsey was reportedly lured to Dahmer’s apartment to pose for nude photos, only to be butchered by the infamous serial killer.

Isbell is portrayed exploding in anger in court in Netflix’s new series Monster.

‘I’m not telling anyone what to watch, I know true crime media is huge [right now], but if you’re actually curious about the victims, my family (the Isbell’s) are pissed about this show,’ Thulhu wrote on Twitter.

‘It’s retraumatizing over and over again, and for what? How many movies/shows/documentaries do we need?’ 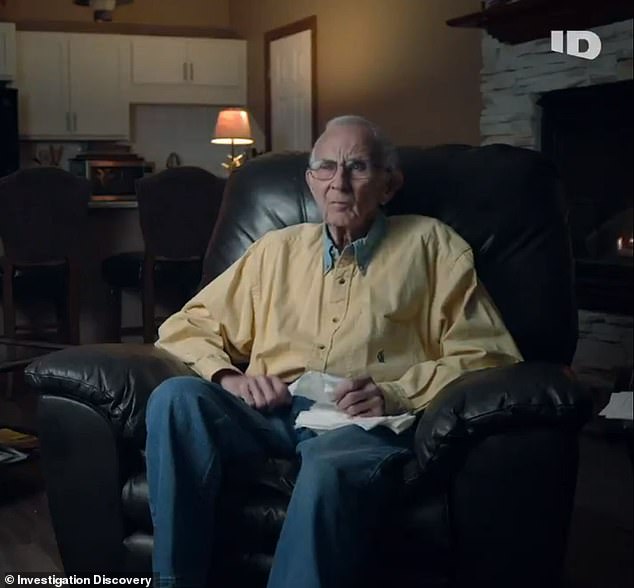 Lindsey was approached by Dahmer at a Wisconsin mall in 1994, and offered cash by the killer in return for letting Dahmer take nude photos of him.

Dahmer then drugged Lindsey and began to drill a hole in his skull, before pouring acid into the opening.

Lindsey woke up during the gruesome torture, prompting Dahmer to strangle him.

Showrunner Murphy claimed that he reached out to 20 of the victims’ family members and friends before making Netflix’s new show about Jeffrey Dahmer, but ‘not a single person responded’ – weeks after the Isbell blasted the series for ‘making money off their tragedy’ without permission.

We [did] research for a very long time,’ he said while discussing the show at an event in September.

‘We, over the course of the three-and-a-half years when we were writing it, working on it, we reached out to around 20 of the victims’ families and friends trying to get input, trying to talk to people, and not a single person responded to us in that process.

‘So we relied very, very heavily on our incredible group of researchers who… I don’t even know how they found a lot of this stuff. 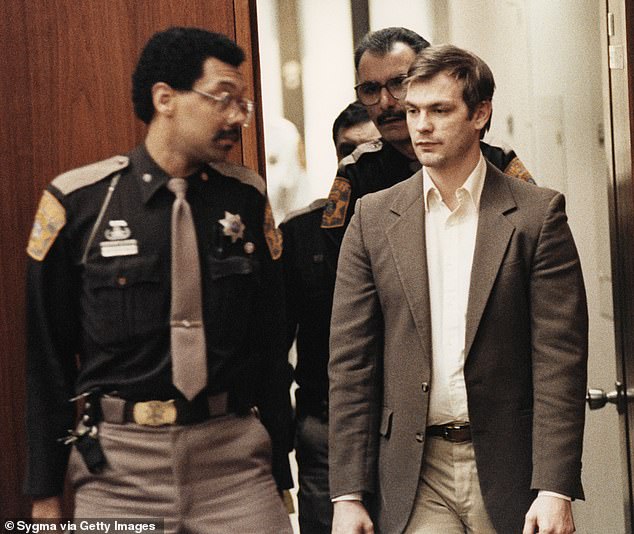 ‘But it was just like a night and day effort to us trying to uncover the truth of these people.’

Days after the show – which stars Evan Peters, Niecy Nash, Molly Ringwald, and Richard Jenkins – dropped, Isbell slammed the ‘harsh and careless’ series in a scathing essay for Insider.

She said: ‘I was never contacted about the show. I feel like Netflix should’ve asked if we mind or how we felt about making it. They didn’t ask me anything. They just did it.

‘I could understand it if they gave some of the money to the victims’ children. Not necessarily their families – I mean, I’m old, I’m very, very comfortable – but the victims have children and grandchildren.

‘If the show benefited them in some way, it wouldn’t feel so harsh and careless. It’s sad that they’re just making money off of this tragedy. That’s just greed.’

Dr Phil’s Tuesday episode also featured an interview with Dahmer’s former army roommate, Billy who claimed the killer drugged and raped him when they served in Germany. He said he threw up after watching an episode of Monster.

Records show that Lionel now lives with his second wife, Shari, in Seville, Ohio, around 25 miles west of Akron. He has been divorced from his son’s mother, Joyce, since 1978 after she had an affair.

His caretaker Jeb told The Sun earlier this year: ‘This new Dahmer show blew up really quick. Anything Dahmer related blows up. It seems like every time a movie or series comes out, that’s when a lot of the crazy starts happening with the fan boys and the fan girls.’

In the show, Lionel Dahmer is played by actor Richard Jenkins.

In an interview with The Sun, Lionel’s caretaker Jeb said that the father was considering a lawsuit against Netflix as he alleges that he was not consulted about the Evan Peters-starring series.

Jeb said: ‘From my understanding and from everything that I’ve seen and witnessed personally, Lionel was not contacted about either of these shows on Netflix.’

He added: ‘I’ve personally talked to a few lawyers and we’ve talked to his publisher about it too due to all the chaos that is going on and the stories we’ve seen. Lionel and his power of attorney are gathering information and looking at a possible lawsuit against the production team or possibly Netflix.’

‘Everyone is saying that if there was zero correspondence you seek damages. There was zero care whatsoever about Lionel’s wellbeing,’ he continued.

The caretaker went on to describe his employer as a ‘caring father’ who would prefer that people refer to the book ‘A Father’s Story,’ Lionel’s 1994 memoir, for his side of his son’s heinous crimes.

He denied that Lionel has profited from the Netflix series, something that has been rumored on social media. Another fake story that did the rounds following the airing of the show alleged that Lionel sold his son’s glasses for $150,000, something which is not true

Despite remaining out of the public eye after his son’s crimes came to light, he did interviews when his book was released.

Lionel told Larry King that his son was ‘extremely shy’ in his youth but otherwise had a normal upbringing.

He also told the late talk show host that he never wanted to change his name saying: ‘I’m proud of the name Dahmer. My father was a schoolteacher and a barber. He brought himself up from the bootstraps. His father and mother died at a very young age. I have a very good ancestry, and I’m proud of the name.’

In a more recent interview, in 2020 for the documentary: Jeffrey Dahmer: Mind of a Monster,’ Lionel spoke about his son’s 1994 murder saying: ‘When I find out that Jeff was murdered, it was just devastating. It affected me very gravely.’ 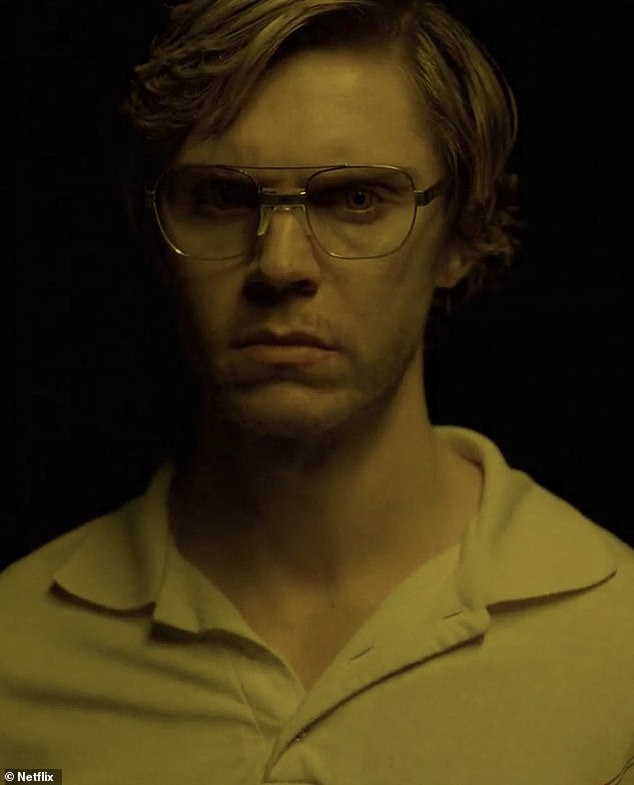 Claim: In an interview with The Sun, Lionel’s caretaker Jeb said that the father was considering a lawsuit against Netflix as he alleges that he was not consulted about the Evan Peters-starring series