Since Jennifer Lopez and Alex Rodriguez started dating, they’ve quickly become one of Hollywood’s most adorable power couples. Here, we take a look back at all of the key moments in their relationship which led to them getting engaged!

Jennifer Lopez and then-husband Marc Anthony attend a baseball game at Shea Stadium in Queens, New York, in May 2005 where they meet New York Yankee, Alex Rodriguez. Of their very first meeting, Lopez told Sports Illustrated in June 2019, “We shook hands, and it was this weird electricity for, like, three seconds… Three to five seconds of looking at somebody right in their eyes, and getting stuck.” 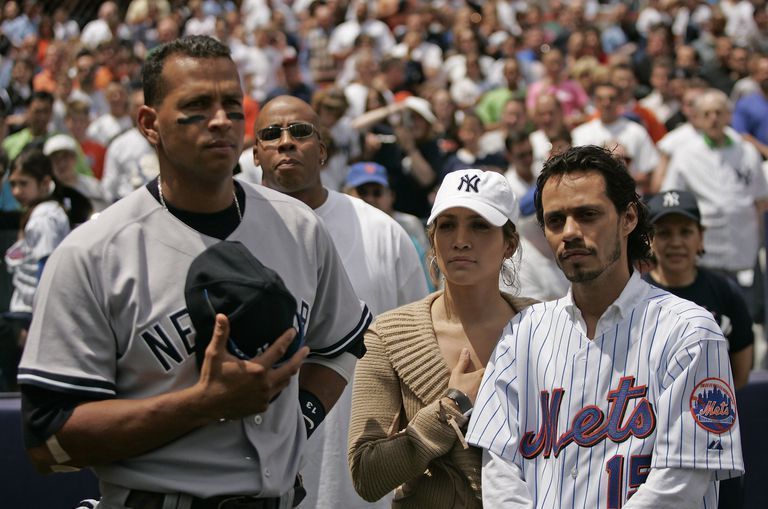 Per Today, Anthony and Lopez got married in 2004, separated in 2011, and finalized their divorce in 2014. They have two children together, Max and Emme. Meanwhile, Rodriguez was married to Cynthia Scurtis from 2002 to 2008 per Daily Mail, and they have two daughters together, Natasha and Ella.

Rodriguez later revealed that he’d actually gotten a signed photo of Lopez in the late ’90s, which he’s kept ever since. Basically, their relationship was written in the stars from the start.

Lopez and Rodriguez reconnect when they bump into each other at a restaurant.

In April 2017, Lopez tells Ellen DeGeneres (per Entertainment Tonight), “I was having lunch somewhere and I saw him as he passed by. Afterwards, I went outside, and for some reason I felt like tapping him on the shoulder.” Rodriguez made the next move: “He texted me, said, ‘Let’s go out to dinner,’ and I said, ‘OK.’ We had a nice dinner.”

In their joint interview with Vanity Fair, released in October 2017, Lopez reveals, “I had just come from a promo for my show, Shades of Blue [in which she plays N.Y.P.D. detective Harlee Santos], so I’m dressed like my character, like a boy—Timberlands, jeans, curly short hair. He looks at me. I say, ‘It’s Jennifer.’ He says, ‘You look so beautiful.'” What a charmer.

In the same interview, Rodriguez sweetly reveals that he had first date nerves saying, “I didn’t know if it was a date. Maybe we were seeing each other at night because of her work schedule. I went in uneasy, not knowing her situation.” He also explains why they hit it off so well: “We’re both Leos, we’re both from New York, we’re both Latino… and about 20 other things.”

Rodriguez tells The View, “It’s obvious, we’ve been having a great time. She’s an amazing girl and one of the smartest human beings I’ve ever met and also an incredible mother.” 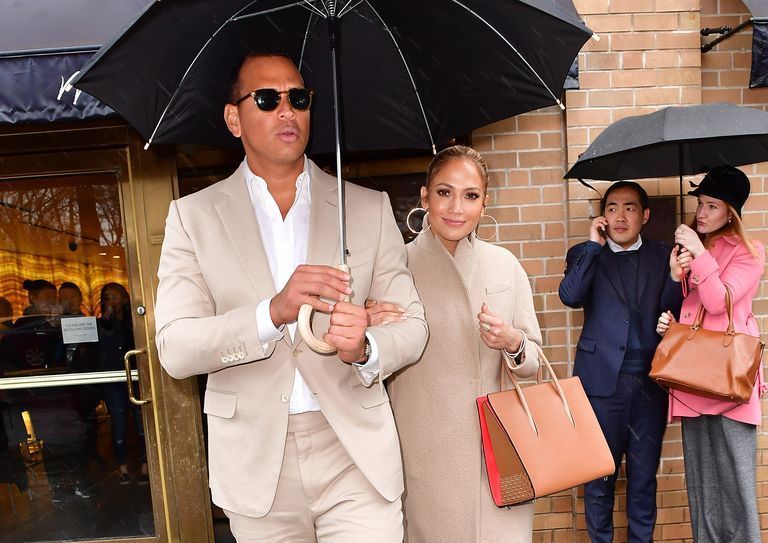 Lopez and Rodriguez are spotted together on multiple occasions throughout April 2017, in New York and Miami. 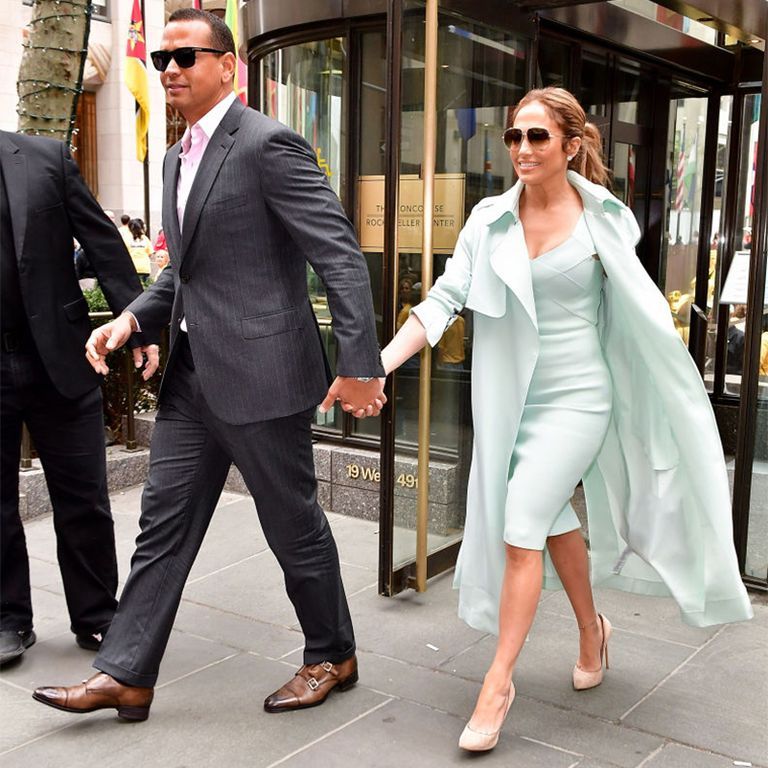 They make a dramatic red carpet debut at the Met Gala. From their adorable after-party moments, to Lopez dancing next to Rodriguez, they quickly become Hollywood’s new favorite couple: 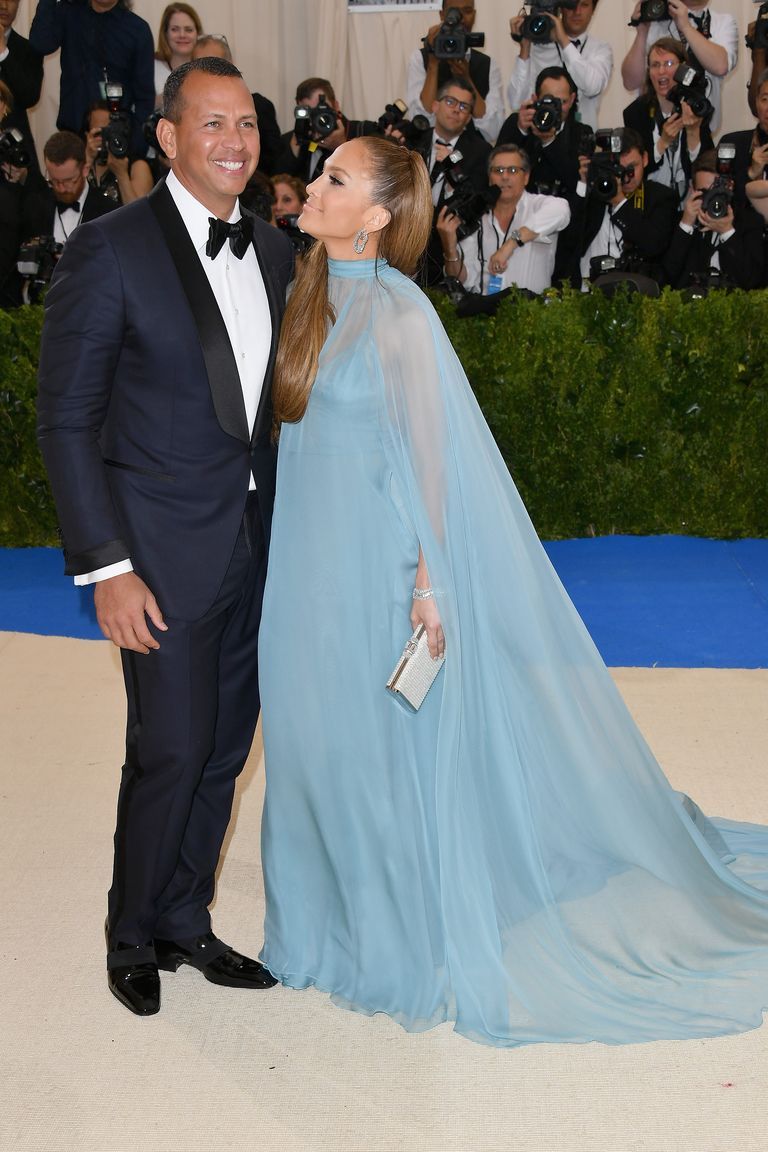 On May 15, the lovebirds attend the Robin Hood Benefit, which aims to fight poverty in New York: 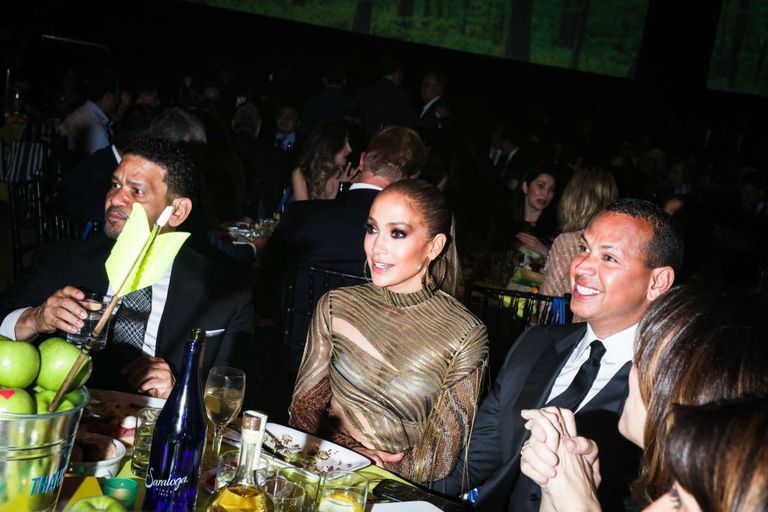 And on May 17, Lopez is spotted FaceTiming Rodriguez while she’s on the set of her show, Shades of Blue: 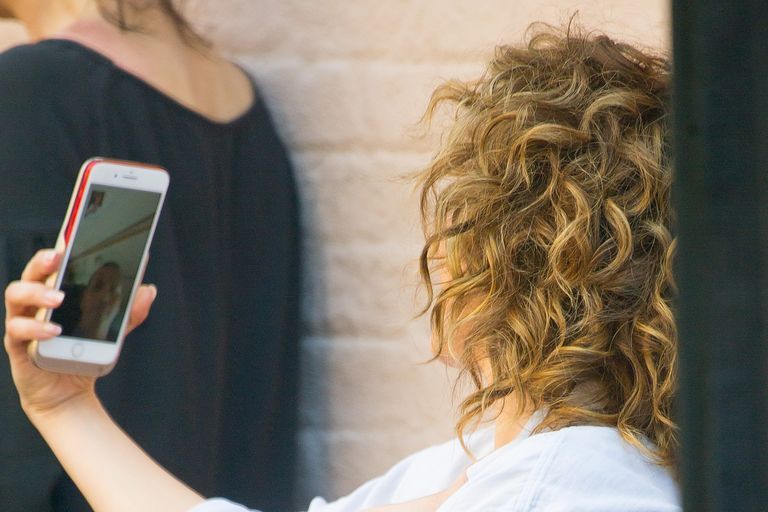 Lopez shares a photo on Instagram of her children hanging out with Rodriguez’s kids. It certainly seems as though the two families get along extremely well:

Also in June, the couple takes a romantic trip to Paris, France, together. They pose for some enviable tourist shots, and eat ice cream as they stroll along the Seine: 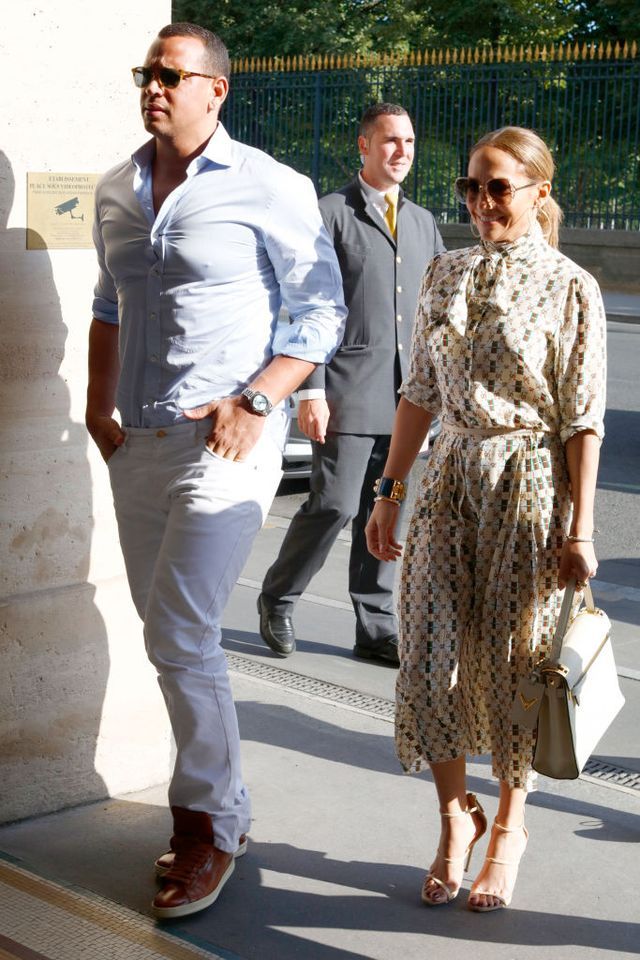 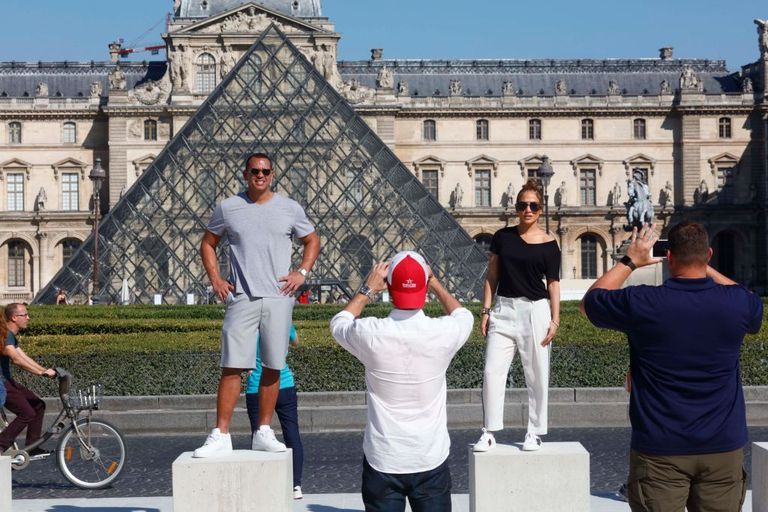 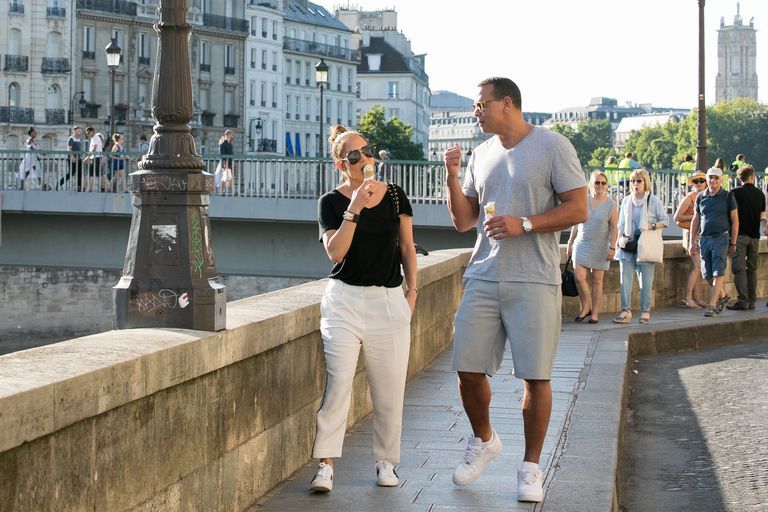 The same month, Rodriguez tells Entertainment Tonight, “Jennifer is one of the most brilliant business minds that I’ve ever met. She’s the hardest working lady and, you know, I grew up with a single mother. I have two daughters. I am a big, big promoter of women equality. I like that for my daughters and Jennifer is the role model.”

Rodriguez and Lopez jet off to Miami: 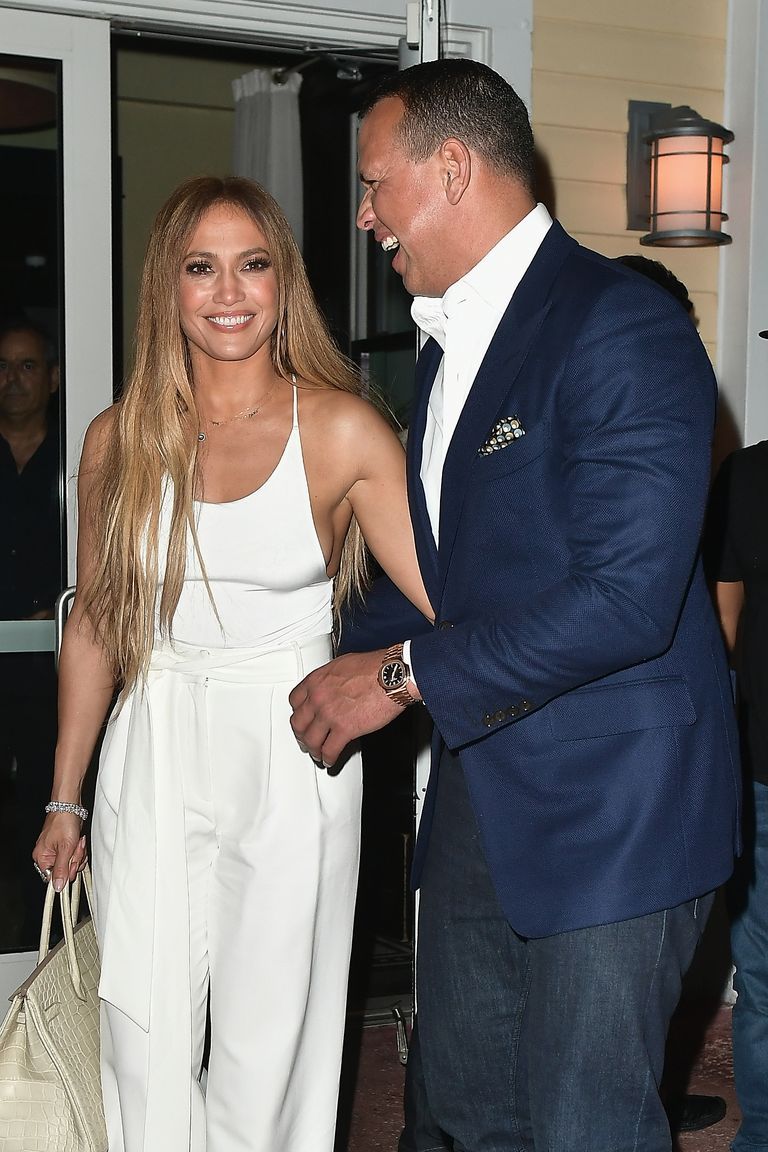 They hang out in the Hamptons with Justin Timberlake: 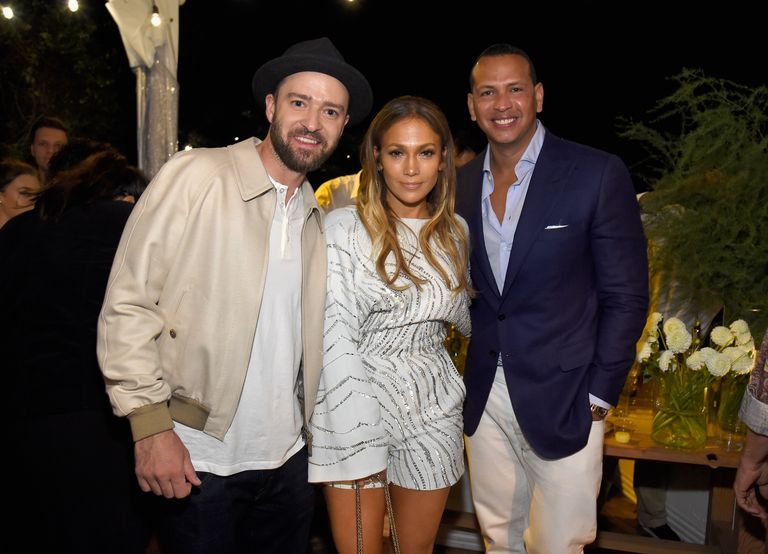 Later in the month, Rodriguez is a supportive boyfriend as Lopez films scenes for Shades of Blue in Queens, and even wears a headset so that he can listen in to filming: 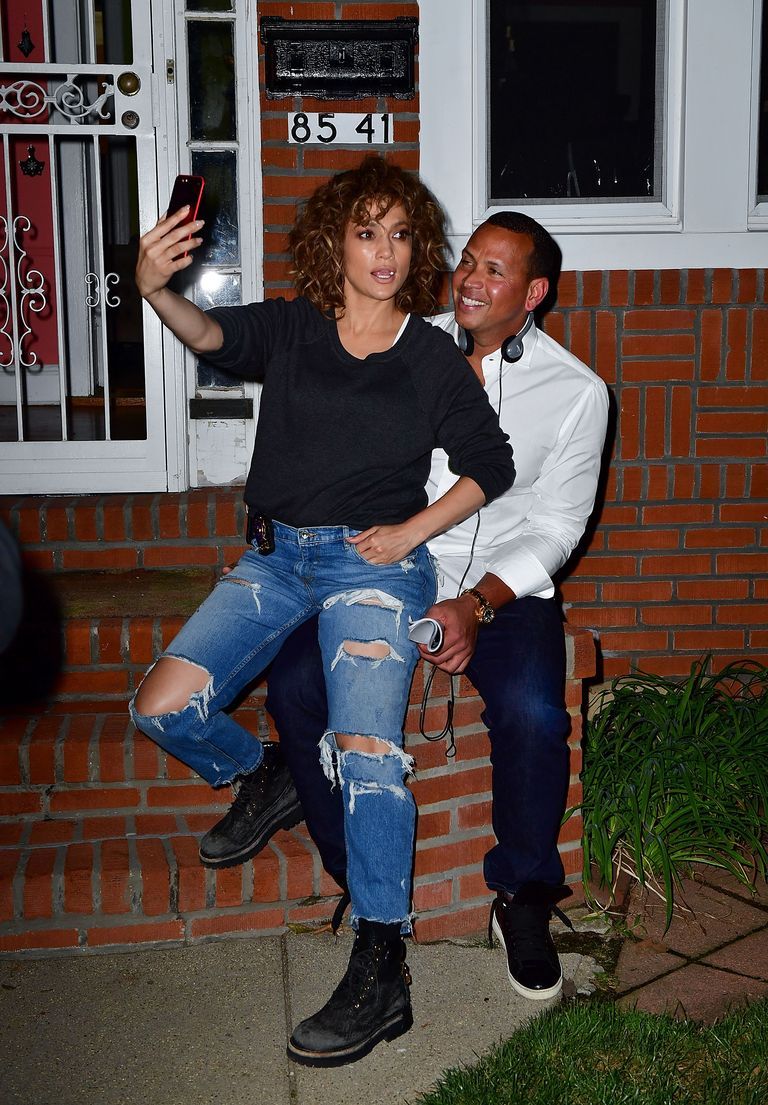 At the end of August, they jet to Las Vegas together to watch a super welterweight boxing match between Floyd Mayweather Jr. and Conor McGregor: 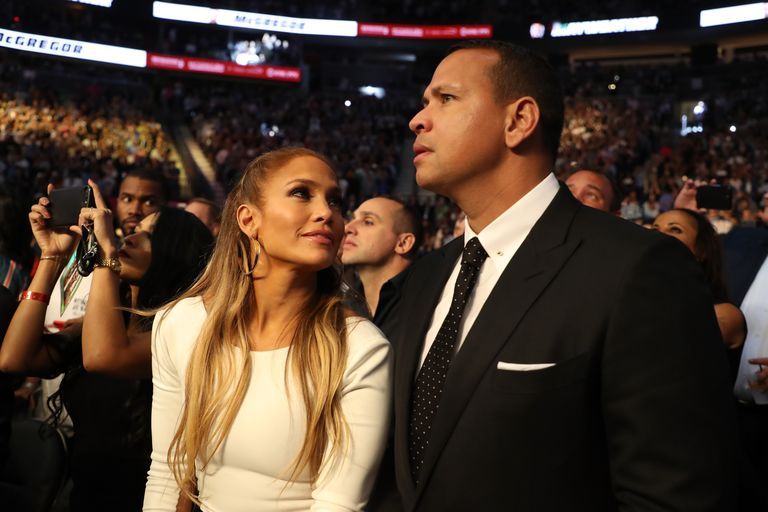 Rodriguez steps out to promote Lopez’s role in World of Dance: 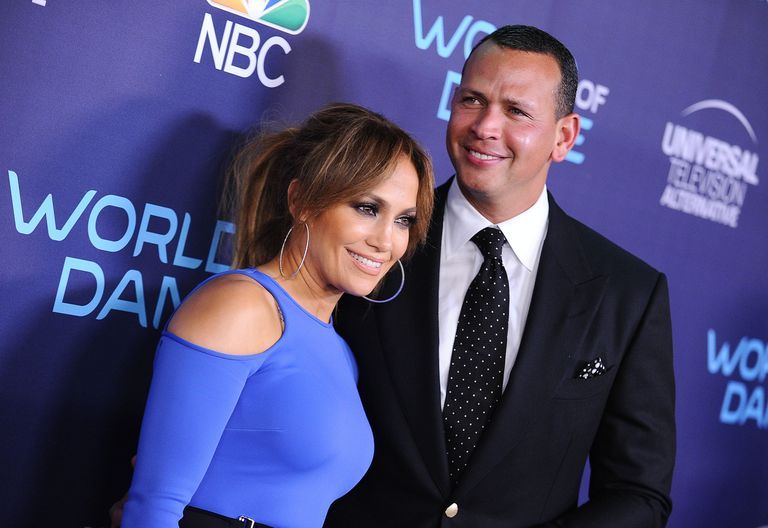 Lopez and Rodriguez take the stage together at One Voice: Somos Live! A Concert For Disaster Relief in Los Angeles, California. 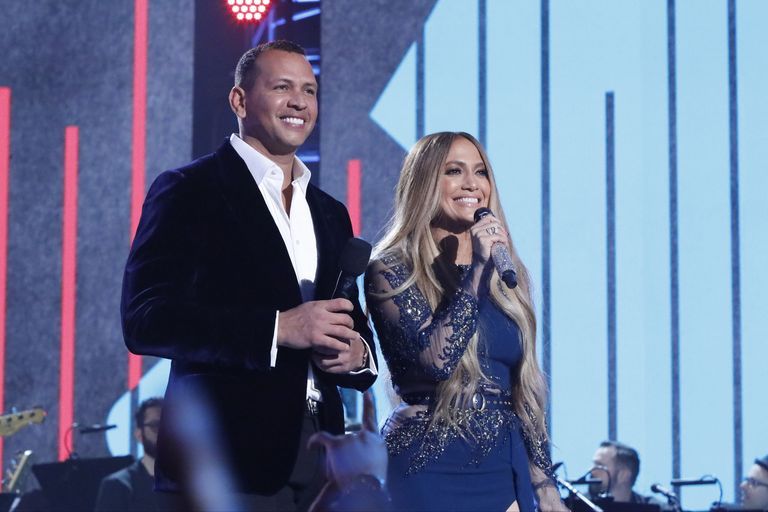 They also cover Vanity Fair, and give an enlightening joint interview: