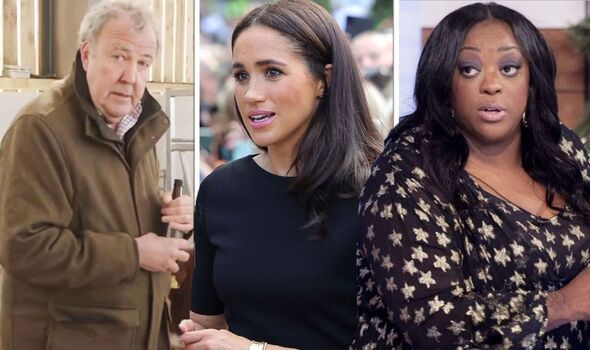 Former Top Gear presenter Jeremy Clarkson issued a second apology to Meghan Markle over comments he made about the Suits actress in his column for The Sun. Loose Women panellist Judi Love, 42, shared her thoughts and has since dubbed the Clarkson’s Farm star’s remarks as “vile”.

In his column, published in December, Jeremy said he “hated” the Duchess of Sussex on a “cellular level”

The remarks sparked a huge backlash, with the 62-year-old’s daughter Emily, as well as many others, speaking out against him.

The controversy could see Jeremy lose his shows on Amazon Prime Video including The Grand Tour and Clarkson’s Farm, according to reports from Variety however this has not been confirmed.

Writing in her column for OK! magazine, Judi claimed she “doesn’t believe” Jeremy is truly sorry.

She wrote: “Jeremy [Clarkson] gave an ‘apology’ to Meghan Markle for the awful things he recently wrote about her in his column.

The ITV favourite blasted his “vile” comments saying he wanted to see Meghan being “paraded through the streets naked” with crowds chanting and throwing “lumps of excrement” at the Duchess.

She finished: “To use the excuse he was in a rush and didn’t read his column properly is laughable. Let’s see how this one pans out!”

In Jeremy’s lengthy apology, which was posted to his Instagram account earlier this month, the presenter said he would usually get somebody to check his articles, but instead wrote the piece in a rush without showing it to anyone.

“So when I’d finished, I just pressed send. And then, when the column appeared the next day, the land mine exploded,” he wrote.

“You are sweaty and cold at the same time. And your head pounds. And you feel sick. I couldn’t believe what I was reading. Had I really said that? It was horrible.”

In his statement, Jeremy added that he had “tried to explain” himself.

“But still, there were calls for me to be sacked and charged with a hate crime. More than 60 MPs demanded action to be taken. ITV, who make Who Wants to be a Millionaire, and Amazon, who make the Farm Show and the Grand Tour, were incandescent.”

It was then that he “wrote to everyone who works with me saying how sorry I was” as well as emailing the Duke and Duchess.

In a statement, he said he emailed the couple on Christmas Day to say his language had been “disgraceful” and he was “profoundly sorry”.

“On Christmas morning, I emailed Harry and Meghan in California to apologise to them too. I said I was baffled by what they had been saying on TV but that the language I’d used in my column was disgraceful and that I was profoundly sorry.”

A spokesperson for the Sussexes said the couple rejected his latest apology and did not believe the article was a careless, isolated incident.

The statement said: “On December 25, 2022, Mr Clarkson wrote solely to Prince Harry, The Duke of Sussex. The contents of his correspondence were marked private and confidential.

“While a new public apology has been issued today by Mr Clarkson, what remains to be addressed is his long-standing pattern of writing articles that spread hate rhetoric, dangerous conspiracy theories and misogyny.

“Unless each of his other pieces were also written ‘in a hurry’, as he states, it is clear that this is not an isolated incident shared in haste, but rather a series of articles shared in hate.”