Kylie Jenner loves to change her hair. Whether with wigs, extensions, or hair dye, she’s never fully committed to one single hairdo. Despite being seen with long bronde hair lately, Jenner revealed her super short natural hair on her Instagram on Monday, March 9. While her natural hair is currently dyed to match her recent bronde shade, the beauty mogul’s bob is a big divergence from her recently favored extensions.

In an Instagram story during a root touchup, Jenner shakes out her chin-length hair while wearing a Stormi World shirt. Though her roots aren’t done yet in the photo, the rest of her hair is dyed the new trendy Kardashian/Jenner color. Kim Kardashian and Khloé Kardashian have both rocked the bronde look in 2020, though not permanently. Kim, the first to show off the color, said in a video, “So Kylie and Khloé thought they were going to beat me to this hair color. I got ‘em.” Like all sisters, the two were quick to respond to the challenge. As she was in the middle of a dye job, Jenner may be the first Kardashian/Jenner actually committing to the bronde shade. Nevertheless, the color has the group’s stamp of approval for summer.

A quick scroll through Jenner’s Instagram shows the waist-length hair Jenner has been favoring lately, but she’s had the super short natural bob since at least February 2020. Hairstylist Jesus Guerrero did the new ‘do. When Jenner first posted a photo of the bob, she captioned the photo, “@jesushair said he was giving me a trim and cut off all my hair.” Though it was just a joke, Guerrero assured fans, “[Jenner] is trying to play me.” 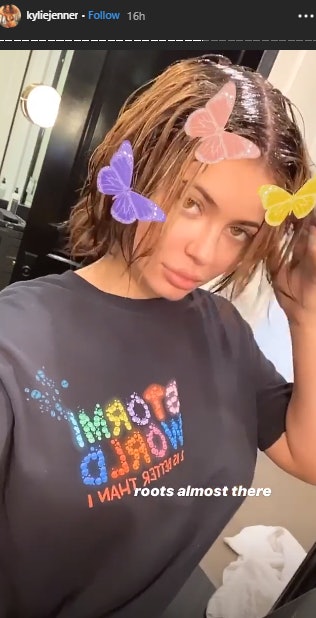 Jenner hops from look to look so quickly, it’s anybody’s guess how long she’ll be showing off her bob. Although Jenner’s recent Instagram activity still has her posting her waist-length hair, maybe this story is an intro to Jenner’s short natural hair moment. And, she won’t be alone in that moment. Selena Gomez, Demi Lovato, and Khloé have all shorn off inches of their hair for bobs and lobs. Makes you wonder who will be next to follow the trend.

1 Jun 21
Sister Wives viewers across the nation have seemingly gathered online for one specific purpose. They…
Celebrities
0

9 Jul 20
During its six-season run, Glee was considered one of the most uplifting shows on television.…
Celebrities
0

25 Sep 19
Months before Laura Jallali was claiming to be pregnant, her son came for her wedding…
Celebrities
0