Reading the room. Lili Reinhart apologized after using a risqué photo of herself to raise awareness for Breonna Taylor, who was killed by Kentucky police in her own home earlier this year.

In a since-deleted Instagram post, the 23-year-old Riverdale star posed topless at a California lake with the caption, “Now that my sideboob has gotten your attention, Breonna Taylor’s murderers have not been arrested. Demand justice.” After taking heat from fans for the way she handled her advocacy, Reinhart expressed her regret in a series of tweets on Monday, June 29. 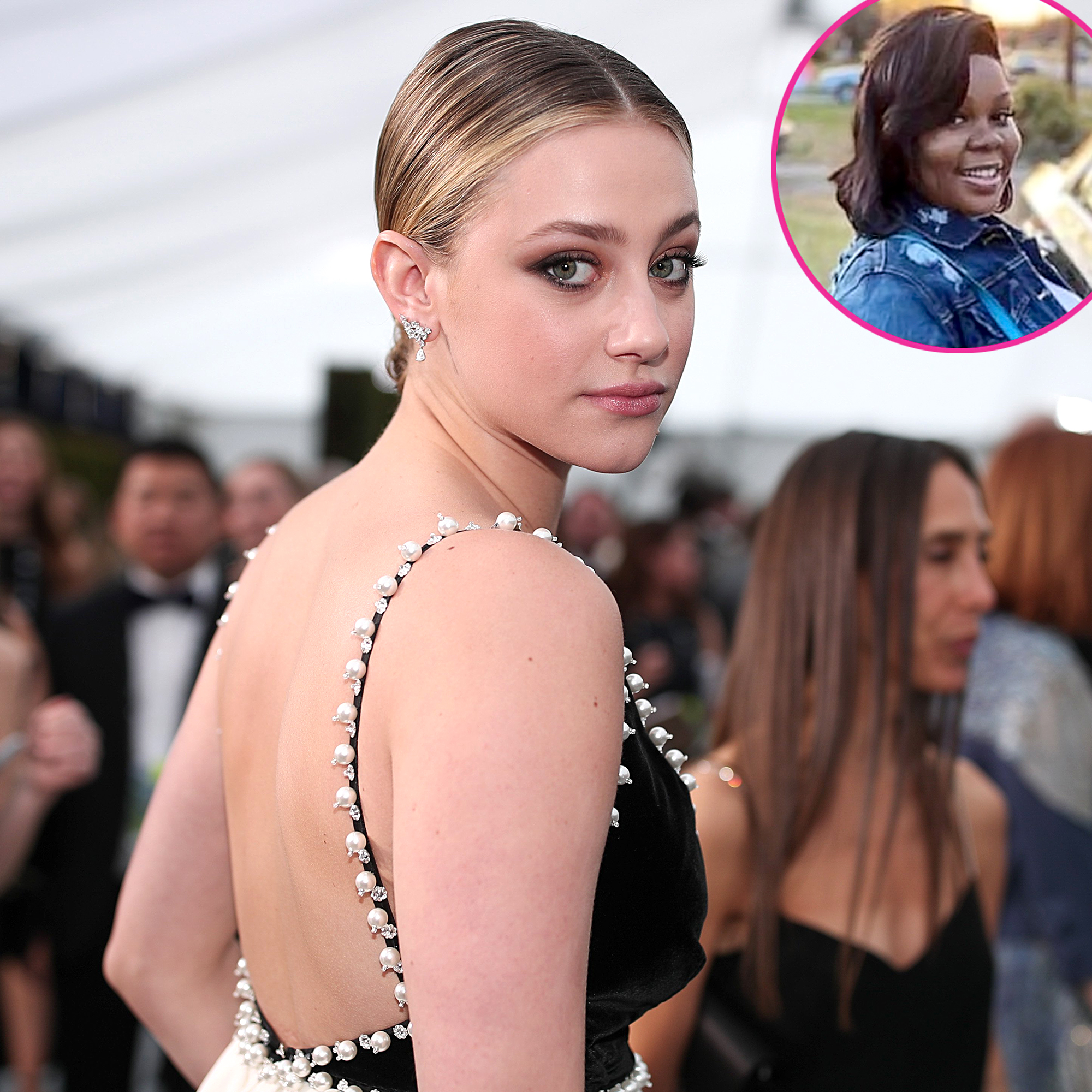 “I’ve always tried to use my platform for good. And speak up about things that are important to me,” she wrote. “I also can admit when I make a mistake and I made a mistake with my caption. It was never my intent to insult anyone and I’m truly sorry to those that were offended.”

The Hustlers actress, who has been hosting conversations with Black activists on Instagram during nationwide Black Lives Matter protests, added: “I’ve tried very hard to be honest on my IGTV lives that I’m still learning and trying to be better. But I understand that my caption came off as tone deaf. I truly had good intentions and did not think it through that it could come off as insensitive.” 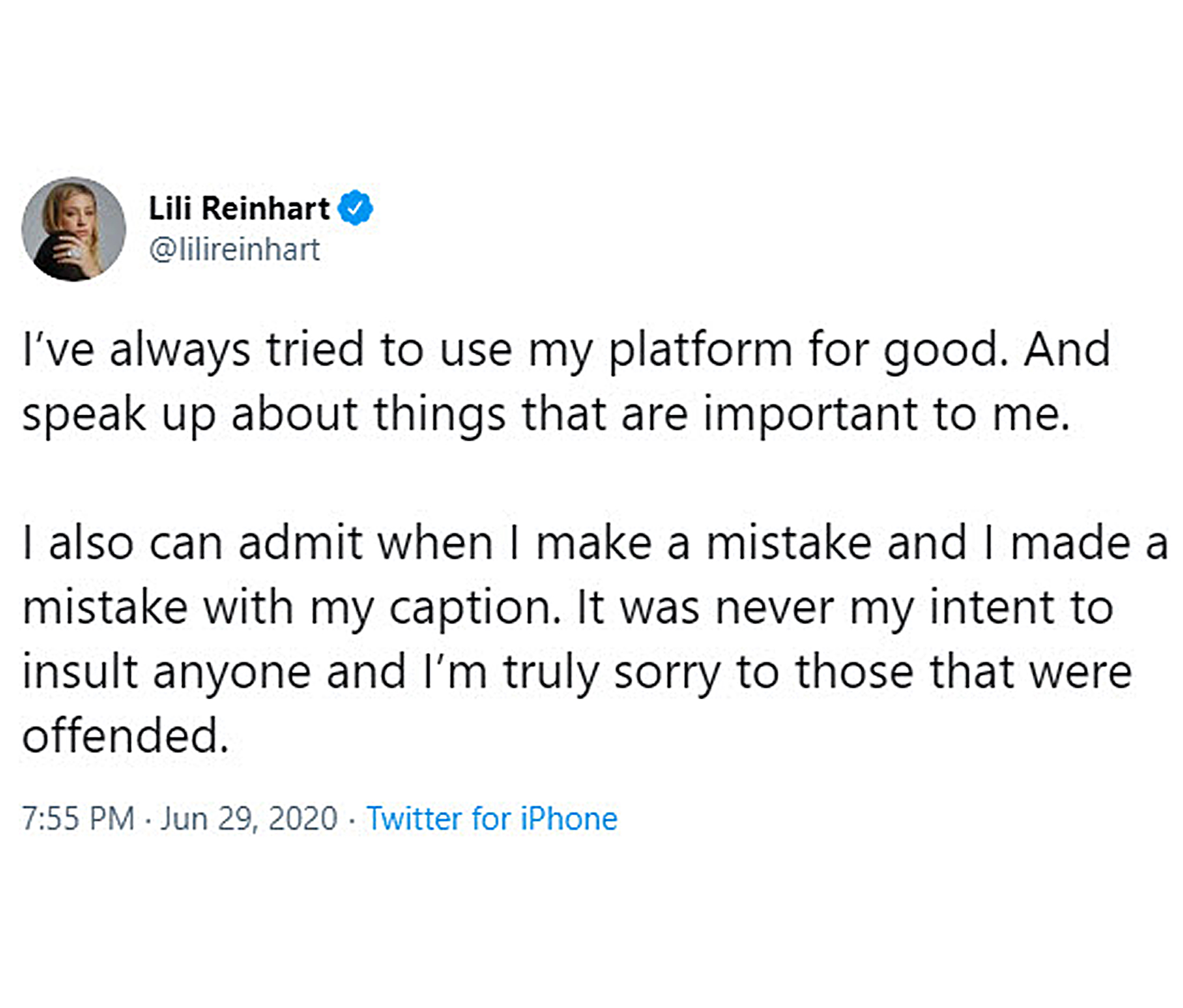 Criticism of Reinhart’s social media activism comes weeks after she and three other Riverdale stars were accused of sexual assault. On June 21, the Ohio native and her ex-boyfriend Cole Sprouse addressed the “false accusations,” which also implicated Vanessa Morgan and KJ Apa in sexual misconduct allegations.

“I have always taken sexual assault allegations seriously. But it was proven that this account was created specifically to create false stories about me and my cast. I can’t think of something more twisted than lying about sexual assault,” Reinhart tweeted in the wake of the accusations. “It invalidates the men and women who are brave enough to come forward with the truth. This kind of lie can ruin lives and careers – and I can call it a lie because the person who made the allegations already admitted that the stories were fabricated.”

The Chemical Hearts star later admitted that the accusations were “triggering” for her and that she was “looking into taking legal action” against the Twitter users who began the rumors. “I hope and pray that this does not discourage real survivors from speaking out about their experiences,” she concluded.

After receiving a strong showing of support from costars Camila Mendes and Madelaine Petsch, Reinhart reflected on the behavior of the “remarkably selfish human beings” who put her and her castmates in an uncomfortable position.

“Strive to be the kind of person who doesn’t live in their own delusional universe. If you are not reflecting on your actions, you are not growing- you are not living,” she tweeted on June 23. “There’s nothing impressive about having too much pride.”

13 Nov 20
Let's just address the elephant in the room: the whole world seems to be in…
Celebrities
0 24 Nov 21
The holidays are here and so is the holiday programming on Disney+! The streaming service…
Celebrities
0