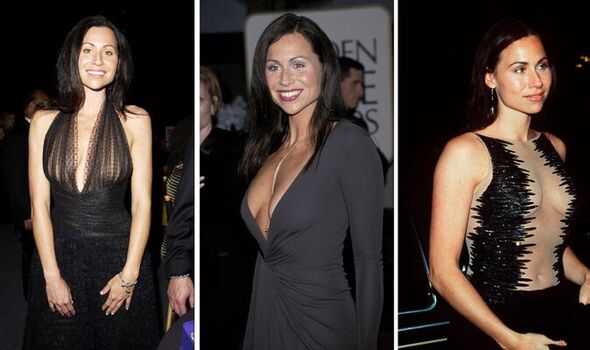 Minnie Driver, 52, looks breathtaking in unearthed youthful pics during her rise to fame

Minnie Driver, 52, has a career spanning decades and her earlier red carpet looks were glamorous as well as fashion forward.

Minnie opted for classic silhouettes but with daring takes.

Minnie would pose confidently for photos at red carpet events.

The Good Will Hunting star would wear her hair in its signature curly style or go for a sleek style.

From the unearthed photos, the Hollywood actress’ youthful looks can be seen whether at A-list events or in candid snaps.

Minnie wore minimal makeup at the awards ceremony to complement her black dress.

She accessorised the look with a simple Y-shaped pendant.

Her outfit on the night had an embellished mesh top.

Minnie looked stunning as she was caught smiling on camera.

Minnie was presenting an award at the 55th annual golden globes.

Minnie wore a black minidress with a cream coat and a matching black handbag at the Kiss The Girls premiere in 1997.

Minnie looked incredible at the premiere of Good Will Hunting

She wore her hair slicked back with bold makeup.

The Hollywood star wore her hair in its signature curly style.

The elegant gown Minnie wore to the premiere of Evita in LA, 1996, had a low neckline and she accessorised the look with a chic satin shawl.

4 May 20
Beyoncé is teaming up with her mother, Tina Knowles Lawson, to spearhead COVID-19 testing efforts…
Celebrities
0