President Trump may have stymied some expectations with his we-are-all-one-nation speech after the military fashion show — sorry, display — in front of the Lincoln Memorial on the Fourth of July, but it was Melania Trump in a slouching-off-one-shoulder mid-calf Carolina Herrera dress, standing silent and smiling by his side in every picture, who really put a twist on the messaging.

After all, if there were ever a moment to go all-out in some form of patriotic dress, to use clothing to make a point, it was this one: a moment conceived by the president and promoted by the White House as a celebration/demonstration of American military might and historical triumphalism; a moment titled Salute to America; a purely symbolic moment designed to create images to go around the world. Mr. Trump himself dressed the part, in his white shirt, navy suit and bright red tie, a little flag pin on his lapel, as color coordinated with Old Glory as it was possible to be amid the tanks.

Yet there was the first lady, in white with … rainbow stripes on her skirt. And fuchsia heels. Rainbow stripes?

Was she using the Fourth of July to celebrate Pride? It was hard not to wonder. Certainly, some observers did.

And though there was a fair amount of chatter online about the issue of wearing a white dress on what was a rainy day (it turned a little uncomfortably see-through), ultimately that happenstance was less provocative than the idea that the first lady might again be using her image as a way to speak her mind.

Because Mrs. Trump does not work with designers to create her public-facing looks but rather buys them (a rarity these days among public figures, and a good thing), they rarely know when she is going to wear one of their products, or why — or so Wes Gordon, the creative director of Herrera, told me after Mrs. Trump had worn a dress from the brand during her recent trip to Japan. As a result, the labels themselves can’t shed much light on whether there is ever a more nuanced rationale behind Mrs. Trump’s choices than simply love of a pretty summer frock. (The Herrera dress in question this time was from the resort 2019 collection, and was on sale for $1,884 on FarFetch.com.)

But you would have had to live under a rock for the past month not to have been met, pretty much everywhere you turned, with rainbow-stripe paraphernalia created in support of Pride Month and the L.G.B.T.Q. community. Even the president’s campaign shop has been selling rainbow-stripe T-shirts. The symbolism could not have escaped the first lady’s office, or her stylist, Hervé Pierre.

Nor could the fact that, despite the merchandise, the president has worked to bar transgender people from serving in the military, and has been appointing to the federal bench judges who do not support trans rights.

And Mrs. Trump does have a history with a similar dress being interpreted in a similar way: In 2017, at the White House congressional picnic — which happened to take place on the same weekend at New York’s Gay Pride parade — she wore rainbow-grid Mary Katrantzou, prompting the Hollywood Reporter to ask, “Could the FLOTUS be using her wardrobe to silently protest against her husband’s anti-gay agenda?” 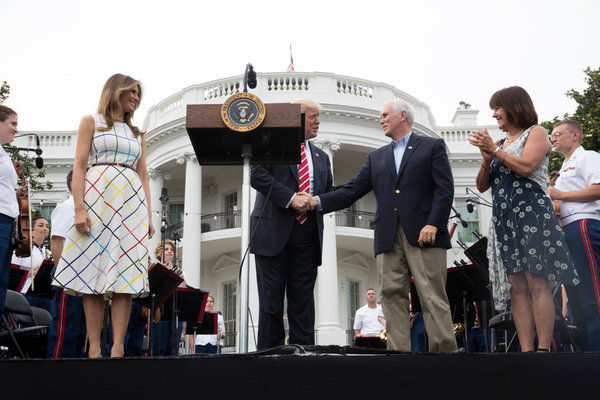 She also knows her symbolism: when she and her husband visited France for Bastille Day in 2017 — the visit that reportedly first gave the president the idea for his military extravaganza — she wore a white dress embroidered with red tulips and blue cornflowers, the latter being the French flower of remembrance, to watch the official parade.

In any case, she was clearly aware of the watching eyes this time around, as, in what has become an increasingly rare gesture, she wore a dress from an American brand — as she did last Fourth of July when she appeared in blue gingham Ralph Lauren, and sort-of did in 2017, when she wore navy Esteban Cortázar, a Colombian-born, Miami-raised designer — as opposed to her usual European favorites, Dior and Dolce & Gabbana.

Unlike those prior Fourth of Julys, however, when she was dressed largely in various permutations of red, white and blue, the reference this past Thursday seemed to be to another flag altogether.

There’s a tendency, still, to see Mrs. Trump’s clothing choices as implicit statements of independence — from her husband and from the country’s expectations — nonverbal clues from a very private woman who rarely speaks and certainly never lets the world in on her thought processes; who offers only highly staged-managed glimpses of her life behind the curtain. Maybe it’s wishful thinking. But honestly, if she was either revealing her own loyalties, or suggesting that despite his actions to appease ultraconservatives, her husband has his own ideas, was there any better day to try?

Vanessa Friedman is The Times’s fashion director and chief fashion critic. She was previously the fashion editor of the Financial Times. @VVFriedman