Prince Harry was overcome with emotion following the moving procession for his grandmother, the Queen, for the lying in state at Westminster Hall. The Duke of Sussex, who walked behind the coffin down Pall Mall alongside his brother, Prince William, along with other close members of the family, could be seen wiping his eyes as the coffin was placed in the hall.

Dressed in a suit adorned with several medals, the Prince waited until he was reunited with his wife, Meghan, who travelled to Westminster Church by car with the Countess of Wessex, while Princess Kate and Queen Camilla travelled in another car before the emotional moment took place. Meghan could be seen holding hands with her husband in a show of support as the pair left the Hall.

The Duchess opted for a sleek ebony coat dress and midnight-black pillbox hat which featured an elegant, netted veil, finishing off her look with a pair of delicate pearl earrings. Pearls are often referred to as ‘mourning jewellery’, a tradition that dates to Queen Victoria’s era.

It was a deeply poignant occasion for Her Majesty’s children and grandchildren, as Princess Eugenie was also visibly moved as she watched the proceedings alongside her husband, Jack Brooksbank. Her older sister, Princess Beatrice, was clearly very emotional, too. She could be seen holding her hand up to her mouth as she watched the service alongside her husband Edoardo. 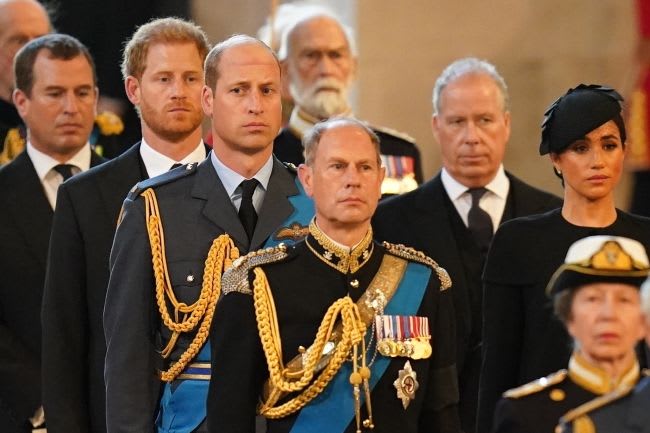 The Prince joined his family in the procession

The historical event marked the first time the majority of the royal family have been seen together since news of the Queen’s death was confirmed by Buckingham Palace on Thursday 8 September. The monarch passed away “peacefully” at Balmoral at the age of 96, and her funeral will take place on Monday. 19 Jun 22
While for many Father's Day means pub lunches and long walks, for those who have…
Celebrities
0