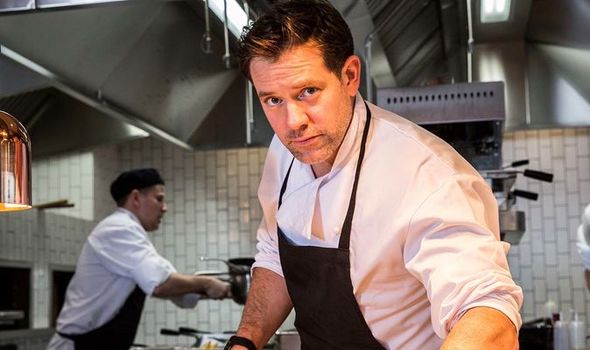 As a professional chef of many years standing, who trained under the exacting gaze of Marco Pierre White, you might think that Matt would turn up his nose at fast food. In fact, he admits that there are times when he positively craves it – and one item in particular.

“My guilty pleasure is a Zinger Tower from KFC,” he confesses. “I’m not talking every day – we all know that kind of thing is not very good for us – but I think it’s fine every now and then. In fact, I’d say it’s good for the soul.

“I’m not at all puritanical about food. I still have a soft spot for the hostess trolley. My mum had one and it would be put to good use on Saturdays in the 1970s and 80s when it would house all the side dishes to go with the steak we’d have as a weekend treat.”

Since 2016, when he took over the full-time hosting role from James Martin, Matt’s weekends have been all about Saturday Kitchen.

“Fridays revolve around rehearsals,” he says, “but it’s a massive leap from that to actually doing the show live on a Saturday. During rehearsals, you’re just going through the motions but as soon as we’re doing it live, everything is heightened 100 per cent.

“This is probably what I love most about it, though. I like the terrifying edge it brings and the way the adrenaline kicks in. You just don’t get that with a prerecorded show.

“We have the same crew, week-in, week-out so it’s like being with your mates and being a member of the best club. Then there are the guests – some are so very talented at what they do, they just blow my mind.”

Just a few of the celebs to turn up in the Saturday Kitchen include the Hollywood A-lister Stanley Tucci – star of Prizzi’s Honor and The Devil Wears Prada and who also writes recipe books, Spice Girl Emma Bunton, pop singer Sophie Ellis-Bextor and Strictly Come Dancing star Stacey Dooley.

“And there I am – interviewing them live on TV,” Mattsays. “Sometimes I get nervous about messing up my lines but mostly I’m quite relaxed.

“The studio kitchen feels like my own kitchen, the wine and the banter’s flowing and there’s great food being cooked. There are times when I forget I’m on TV – and that’s when you’ve got to be especially careful about what you say.

“I always make sure I get an early night on a Friday. I don’t have a drink and it’s lightsout after (the TV show) Gogglebox. I wouldn’t be able to do the show on Saturday if I went out. Getting a decent night’s sleep means I’m raring to go.”

Matt’s been a professional chef since the late 1990s, and worked for the volatile MPW at top London restaurants, Oak Room and Criterion. You would think with such a grounding, he would be practically infallible. But he freely admits to his share of kitchen disasters, usually when working on the celebrity Food Heaven or Food Hell item, in which viewers vote for guests to face their most loved or hated fare.

“It happens more than you’d think,” he says. “I write the heaven and hell recipes for Saturday Kitchen during the week when the guest for the next episode has submitted their likes and dislikes.

“I’m often on the move while I’m doing it and, on paper, the dish will look great. But come Friday and we try the dishes out, sometimes they just don’t work – even though the idea was initially a good one. I don’t get strung out about it. We’re just talking about food at the end of the day. Ultimately, when you’re cooking dinner at home, unless you burn the food beyond recognition, you can salvage something.

“Cooking’s supposed to be fun and yet people put so much pressure on themselves to make these amazing ‘I like terrifying creations. My advice is to just relax a bit.”

So who does the cooking at home? “Er, me usually,” he says. “Jessie used to do a lot before she left home. She now shares a place with mates and cooks a lot for them. I’m happy to be in the kitchen at home. We eat quite healthily as a family – although I am partial to using quite a lot of butter from time to time. I cook from scratch and use fresh ingredients, olive oils and vinegars – fresh, clean tastes. I love making Asian food and am working on incorporating as many vegetables as possible into our meals.”

That may the influence creeping in of Matt’s new cooking show, Go Veggie and Vegan with Matt Tebbutt, starting on Channel 5 tonight.

“I’m no veggie by any stretch of the imagination but I like experimenting with vegetables to get flavours that are as satisfying in their own way as meat,” he explains. “I think people worry that they’re going to go hungry if they cut down on meat but that’s not the case.

What is happening where you live? Find out by adding your postcode or visit InYourArea

“A hot pot made with different types of mushrooms can satisfy a carnivore – just throw in loads of different flavours like paprika, garlic granules, toasted sesame oil and even lager. This builds up the flavours you usually associate with meat dishes and when tasted together, it’s almost barbecuey and there are so many different textures.

“A mushroom and walnut Bolognese sauce is delicious and there’s so much you can do with cauliflower. Far more than just the current craze for cauliflower steaks, nice though they are.”

Yet there are times when even Matt has had enough and longs to escape the stove.

“During the lockdowns, I did get tired of cooking,” he admits. “There was nowhere to go, no one to see and no work on the go. I’d start cooking at home at about 2pm and spend hours and hours on it. Most of the time it was great – I’d open a bottle of wine and put my music on – but doing it day after day did get wearing.”

He couldn’t be happier that, at last, life seems to be getting back to normal. He’s excited about the future and in addition to his television work, recently launched his own side business called Sauce It.

“It was born out of an idea my food supplier friend Tom Burn and I had during lockdown,” he says. “Tom’s been in the trade for a long time, supplying restaurants and so on. As chefs, we have access to fantastic produce and ingredients from wholesalers; items you just don’t find in shops.

“These might be really simple – such as really good quality oil or vinegar – or more complex items. The sort of things that really elevate a dish or make an impressive standalone meal. We thought we’d open this market up and make it available on an on-line delivery platform to non-professionals.

“It’s seasonal and we tailor our ingredients and delivery to different times of the year. It’s basically like a restaurant chef’s and food supplier’s little black book.”

So, as someone who loves to inflict the food heaven and hell question on his guests, what would be his choices?

“Hell? Tripe, and also anything that’s been messed about with too much,” he says. “Heaven? A massive Chinese.”

That or a KFC Zinger Tower, presumably… 4 Oct 21
Selena Gomez is joining Coldplay on their new album! It was just announced on Monday…
Celebrities
0 9 Jun 21
Did Elizabeth Olsen get married? That's what fans are thinking, after she referred to Robbie…
Celebrities
0