You may have finished Netflix’s series Shadow and Bone, but you’re not ready to say goodbye to Ravka and all its characters just yet. While you could rewatch the entirety of Season 1 all over again or read any of the Grishaverse novels from Leigh Bardugo, there’s another fun way for you to immerse yourself in the show. TikTok’s Shadow and Bone quiz will reveal which character you are just by answering a few personality questions.

Are you more of a schemer or are you always honest? Do you tend to be a leader in group projects or are you big on collaborating within your crew? These are just a few of the questions the Shadow and Bone TikTok quiz will ask you to determine which character you are. Many TikTokers have already tried it out for themselves. In fact, the #ShadowAndBone tag on the video-sharing app has over 4 billion views, so it’s time for you to join in on the fun. All you need to do to take the Shadow and Bone quiz is to use the "Shadow & Bone Quiz" effect on TikTok. Once you have it selected, record yourself answering the questions by tilting your head either left or right. There are five questions — once you’ve answered all of them, the character you’re most like will pop up on the screen.

Are you a strong but quiet Sun Summoner like Alina, or are you a flirtatious leader like General Kirigan? You’ll just have to take the Shadow and Bone TikTok quiz like these seven other TikTokers to find out for yourself.

1. Do You Have Side Or Main Character Energy?

Before TikToker @soupytime took the Shadow and Bone quiz, she really thought she was going to get Jesper, because she’s often told she has "side character energy." However, after answering the questions, it’s revealed she is actually more of an Alina. So, you could also go from side character to main character with one quick TikTok video.

TikToker @mattheperson really embraced his Jesper quiz results. After taking the quiz and saying how Jesper is "practically a Gemini," he demonstrated just how Jesper would react in therapy. The impression is spot-on and hilarious. 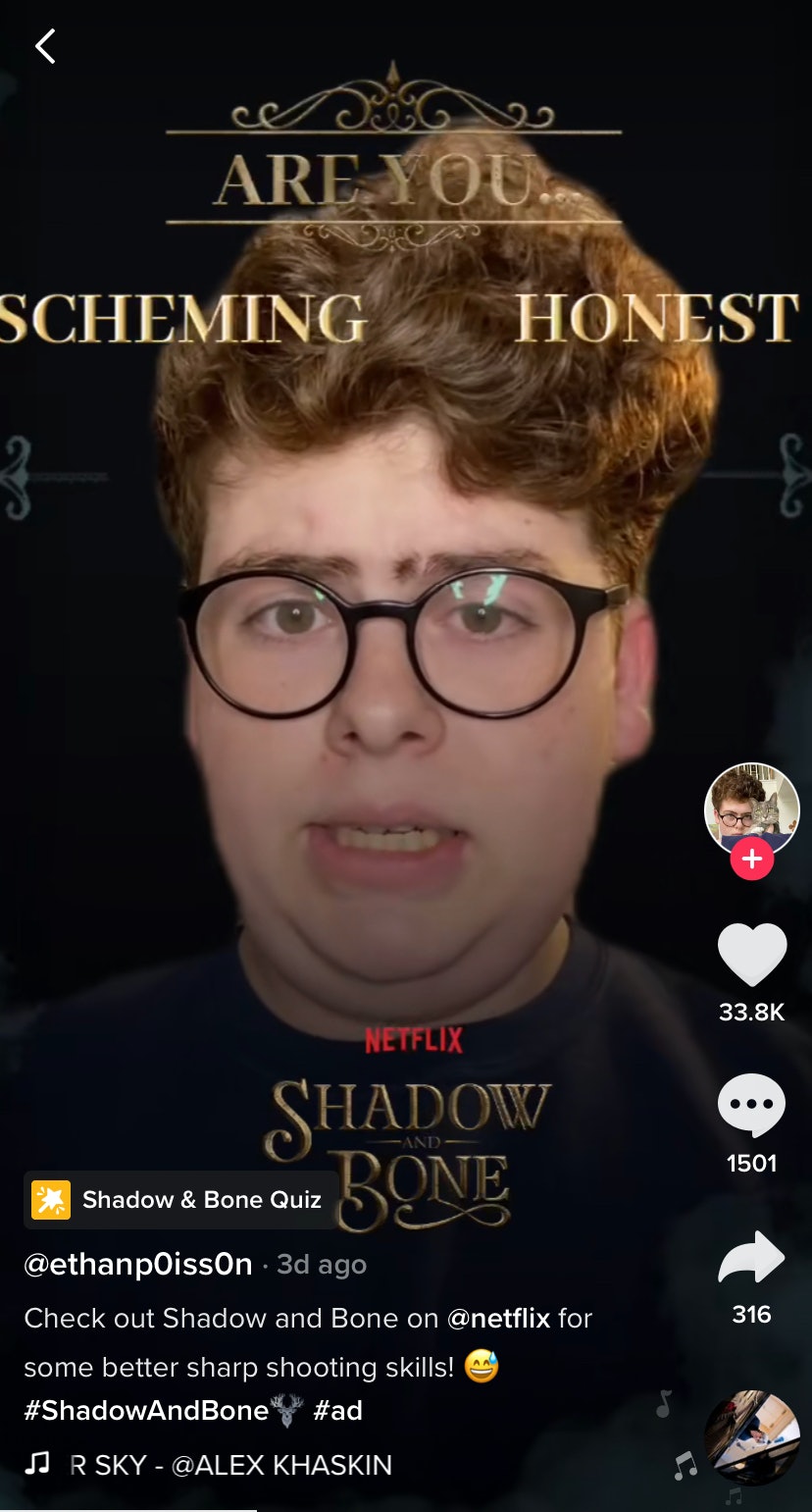 Jesper is more relatable than you’d think. TikToker @ethanp0iss0n also got the sharpshooter as his Shadow and Bone character. To show off how alike the two are, Ethan decided to use some bananas to show off his gun spinning skills. Unfortunately, he needs a little more practice to get as good as Jesper.

5. You Can Always Retake The Quiz

If at first you don’t get the Shadow and Bone character you want, try again. At least, that’s what TikToker @caitsbooks did. After getting Mal on the first go, she decided to take the quiz one more time, change one answer — and got Alina. You could be both scheming and honest, so feel free to do a second take if one doesn’t give you the result you like.

6. If You’re A Hopeless Romantic, You Could Be Alina

TikToker @flossybaby loves love, which is why Alina is a perfect match Shadow and Bone character. You can also take the time in your TikTok video to explain why it makes sense that you got the character you did. As @flossybaby says, you might be Alina if you’re also a hopeless romantic and super adventurous.

TikToker @saraecheagaray acted out an entire scene from Shadow and Bone after getting an Alina quiz result. You could do the same in your TikTok video to really embrace your character. If you get Alina, use Sara’s sound to act out the final showdown scene from the Netflix series.