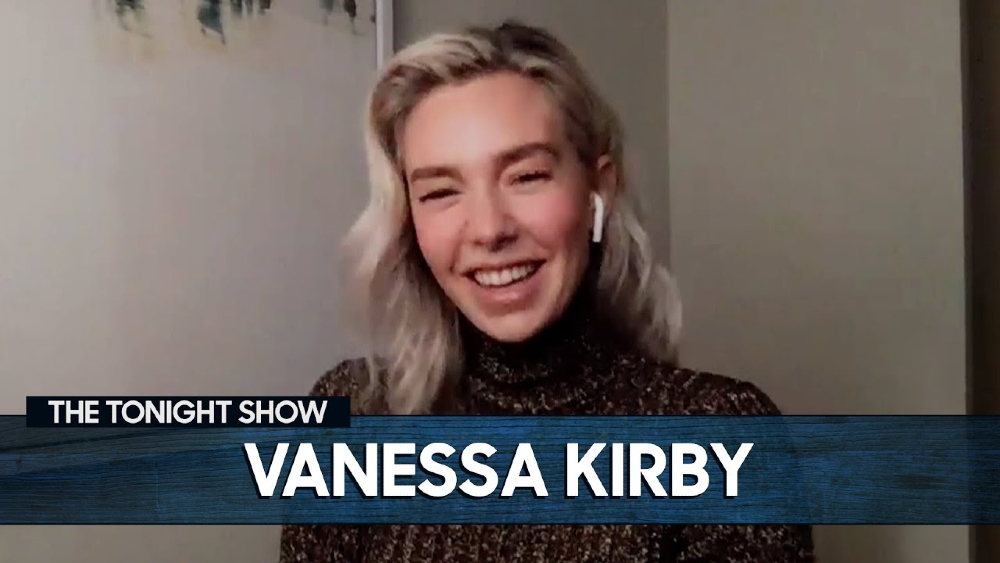 Like Kaiser, there is very little chance I will watch Vanessa Kirby’s new film, Pieces of a Woman. Or maybe I will, but just fast forward through the first half hour, because I don’t know if I’m strong enough to watch what sounds like a really traumatic child loss situation. I really like Vanessa, though, and want to support her. Plus, I think she’s got some chops so she’s probably fantastic and lord knows Ellen Burstyn elevates everything she’s in. For now, however, I will be content to watch Vanessa’s interviews because she is as charming as she is talented. Even when she’s telling what sound like traumatic stories, she makes them sound perfectly delightful. While calling in to The Tonight Show with Jimmy Fallon, Jimmy asked Vanessa about an audition she had once in which her bottle of water slowly seeped down her leg throughout her reading. I posted the interview below but here are a few highlights

She’s in lockdown with her sister and they’re watching films
I got into a serious stage. Cassavetes, Fellini… then we went through a really good Tom Hanks stage. When you watch them in succession, he’s so comforting. He’s just the most lovable. Castaway [holds up]. I had a lot of dreams about it that night.

Her nickname for being clumsy
They call me Bambi. You know how Bambi is on the ice? Always have been [clumsy]. I have a real lack of spatial awareness.

On an unfortunate incident at an audition
That was a bad audition. I’ve had many, but that was particularly bad. It was a really big audition for me, I was so nervous. Got in the room there was maybe 30 execs in suits. Sat in the front. There was this big, long speech, really emotional. 30 seconds in I thought ‘what’s that.’ I could feel I had a bottle of water in my lap. I hadn’t put the lid on properly. A stream of water was just flowing down my leg. I left and I was soaking. No one said anything either.

I don’t know if I could watch Castaway a second time. I enjoyed it the first time but it’s not one of those films I’ve ever been inclined to re-watch. However, I’d just resolved a major tooth issue prior to the film’s release and when he knocked his tooth out, I could feel his relief throughout my being. I, too, had dreams about it for weeks after I’d seen it. Weird. I love that Vanessa is called Bambi. She looks like a Bambi! I am also clumsy, but in a tripping, running into things kind of way. Whereas I am convinced Vanessa and I would be good friends, we might be a menace to anyone’s home we visited together. One of the reasons I think Vanessa is so talented is because in the clip Jimmy showed during her segment and in her portrayal of Princess Margaret, she conveyed a sense of quiet inner torture in a way that made the viewer feel it. It was both graceful and painful, expertly expressed. To watch the true Vanessa in these interviews and how gregarious and blithe she is, it makes me appreciate what she does on screen so much more.

As for the water incident, how does one recover from something like that? I guess you don’t. Vanessa did the only thing she could, which is walk out and pray they all noticed the leaky water bottle in her hand. I suppose she left an indelible impression on everyone in the room, none of them would ever forget the girl who leaked out a puddle of water with her emotional audition. But as Jimmy said, it is great to have these stories now that she’s achieved fame. If she’d never gone anywhere, it would have simply been the punchline at Christmas dinner, “remember that time Bambi dripped herself out of a career in Hollywood?” This is a much more entertaining outcome.

Here is the full video as promised. Jimmy asked Vanessa what her sister does in the first part of the video. They never actually get around to answering it due to Vanessa’s giggle attack, so I looked it up for you. Juliet Kirby is an agent. You’re welcome.