It’s hard to believe that “The Kelly Clarkson Show” has only been on the air since 2019. It didn’t take Kelly Clarkson long to attract a loyal audience who fell in love with her sunny personality and wicked sense of humor. In addition to hearing stories about her guests, viewers are regaled with hilarious anecdotes about the filter-free singer’s own life, like the time she experienced intestinal distress and had to use a trash can as a toilet during one of her shows. How can we forget a moment like that?

The “American Idol” star came with a built-in audience, but simply being a celebrity isn’t enough to carry a daytime show. Some of the stars who learned this hard way include Kris Jenner, Chevy Chase, and Queen Latifah. Luckily for Clarkson, she got a little practice ahead of her show’s 2019 debut. During an April 2018 episode of “The Ellen DeGeneres Show,” Ellen DeGeneres turned the tables on Clarkson by offering to be the interviewee. Clarkson assumed the role of host and proved she was a natural when she introduced her guest. “She’s the queen of daytime, the queen of kindness, the queen of my life, I love her,” she said. “She loves to scare people, that part sucks, please welcome Ellen DeGeneres!”

DeGeneres will bid farewell to daytime TV next year, and “The Kelly Clarkson Show” will slide into her time slot, per The Hollywood Reporter. So, how does Clarkson feel about taking over for the veteran host?

What Kelly Clarkson told Ellen DeGeneres about her talk show 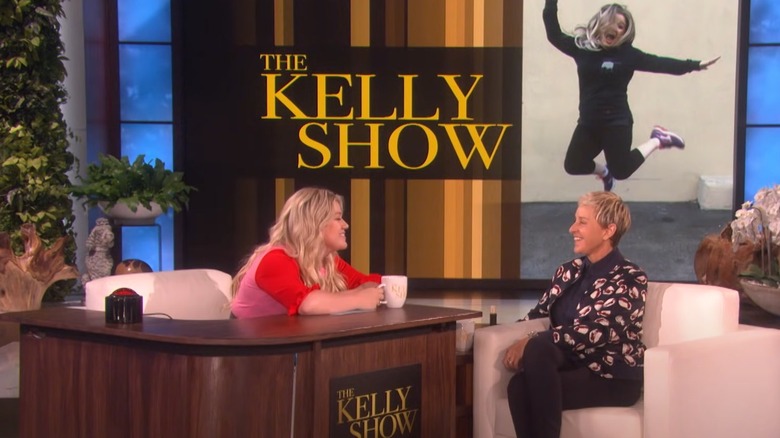 According to Kelly Clarkson, she’s not actually “taking over” Ellen DeGeneres’ role. “No one can take over for Ellen. It’s an iconic show,” she told The New York Times. She used a musical analogy to make her point, saying that she’s “never going to be Whitney Houston,” and we get what she’s saying. Just like she shouldn’t be compared to other artists, her talk show can’t be compared apples-to-apples with “The Ellen DeGeneres Show.” DeGeneres has the dancing and surprise scares, while Clarkson has her fan-favorite “Kellyoke” opening. Speaking of which, now that we revisit Clarkson’s 2018 takeover as host of “The Ellen DeGeneres Show,” it feels like a test run for her talk show — she even got a Kelly’s Karaoke segment.

“The Kelly Clarkson Show” became a ratings hit and Emmy darling. However, when Clarkson returned to “The Ellen DeGeneres Show” in September 2019, she confessed that she wasn’t interested in being a talk show host when she was first approached with the idea. “I was like, ‘No, everybody’s been drinking or getting high. This is a horrible idea,'” she said. However, her former husband and manager, Brandon Blackstock, convinced her to give it a shot. “He kind of sold me on the fact of all the good we’d be able to do, and inclusion, and all of that,” she said.

No matter what time slot she’s in, fans are just happy to see the “Stronger” singer on TV. 2 Nov 21
S.F. fans might be hurting right now, but there's something to look forward to for…
Celebrities
0