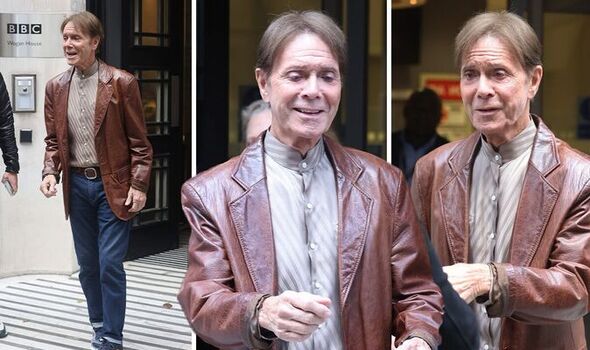 Youthful Cliff Richard, 82, was all smiles as he exits BBC studios in a stylish brown ensemble

Cliff Richard, 82, was all smiles as he was pictured leaving BBC’s Wogan House after an interview with BBC Radio 2’s Ken Bruce this afternoon. The singer looked very youthful as he cut a stylish figure in a brown leather jacket.

Cliff Richard, 82, was all smiles as he was pictured leaving BBC’s Wogan House after an interview with BBC Radio 2’s Ken Bruce on Thursday.

The Young One’s hitmaker paired this with a pair of casual blue jeans, trainers and a leather belt.

Cliff was on the BBC radio show to give listeners an exclusive first play of his new Christmas single Heart of Christmas.

Ken asked the singer if he had any plans to retire, with Cliff replying: “Stop is a good word. I might stop one day. I don’t want to retire.”

Cliff Richard sported a brown leather jacket, paired with a striped satin brown shirt and blue jeans. He made sure to keep his feet comfortable as he wore a pair of sporty trainers.

Cliff Richard is known for his 1988 hit Mistletoe and Wine, with the singer now dabbling in Christmas songs again. He gave an exclusive first play of his new single Heart of Christmas to Ken Bruce today on BBC Radio 2.

Cliff Richard admitted he has no plans of retiring

Ken Bruce asked Cliff Richard if he had any plans to slow down his music career and retire. Cliff replied: “Stop is a good word. I might stop one day. I don’t want to retire. Once you’ve retired you feel you’ve got to stay away and if you do want to do something it’s called a comeback. And every time I hear somebody has made a comeback I’m thinking they’ve run out of money.”

Cliff Richard shared his love for music and recording

Cliff Richard said on BBC Radio 2: “Recording is so much fun, if I could record every day of my life I would. It’s always a challenge because every time you do an album, there is something different about it.”

Sir Cliff said to Ken Bruce that he was approached by a record company to create his new album Christmas With Cliff, which includes nine classic Christmas tracks and three new songs.

Cliff Richard said about his new album and love for music: “I have always loved being in recording studios ever since Studio 2, Abbey Road, in 1958. I recorded this album in Criteria Studios in Miami, Florida – 4,427 miles away from Abbey Road – and once again I felt that I was in a world of my own! I had the help of two producers, Sam Hollander and Chris Walden. They guided me through the ‘well known’ Christmas songs and freed me to sing them my way. They had differing approaches to the songs that I asked them to produce for me, and they gave this album the dynamics that I had hoped for. This album is not just mine, it belongs to all of us involved in creating it, and I hope that we add a little something special to your Christmas season.” 16 Mar 21
Lala Kent and her fiancé, Randall Emmett, have welcomed their first child together, a baby…
Celebrities
0 13 Dec 21
I'm A Celeb: Danny Miller admits needing money for his sonWe use your sign-up to…
Celebrities
0 27 Feb 21
Want the most up-to-date celebrity exclusives sent straight to your inbox every day? Sign up…
Celebrities
0