In Las Vegas, the Jabbawockeez are both famous and unknown. Images of this hip-hop dance crew, its members ciphers behind their signature white masks, beckon from multiple casino billboards along the Strip.

Who are these dancers? Even if you watch “Timeless,” at the MGM Grand Garden Arena — where, after some Covid fits and starts, the Jabbawockeez returned to the stage in March — you won’t find out. The show’s 20 masked performers remain deliberately anonymous, uncredited in any program.

But this faceless crew can make all audience members feel seen, no matter their relationship with dance or hip-hop. In “Timeless” the Jabbawockeez lead a virtual tour of the hip-hop music and dance cultures of the West Coast, the South and the East Coast; a few scenes later, they mime a slapstick routine to the Muppets’ “Mahna Mahna.” They swing their way through Frank Sinatra’s “Fly Me to the Moon,” then cheekily overlay Sinatra’s final crooning “I love you” with the “youuuuuu” of Soulja Boy’s rap earworm “Crank That.” 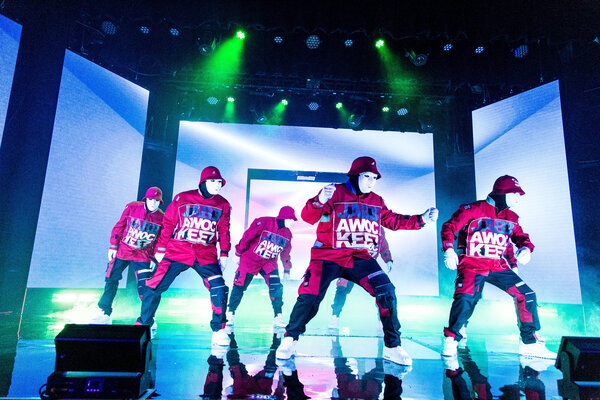 “The idea is that everyone in every demographic, every generation, should have a moment in the show where they can relate,” said the dancer Jeff Nguyen, known as Phi.

Residencies in Las Vegas often hinge on recognizable names, with dancers relegated to the background. But the Jabbawockeez, with their something-for-everyone approach, proved that an ensemble of unknown, masked dancers could pull in crowds. “Timeless” is the crew’s fourth evening-length show on the Strip, where it surpassed 2,000 total performances in February 2020. The Jabbawockeez survived a Covid pause, and emerged with a contract extension: MGM Resorts just re-signed the crew for four years. At the end of that term, the group will have been in Las Vegas for 15 years — Celine Dion territory.

The seeds of that remarkable success were sown in 2003, when the Jabbawockeez founding members, Kevin Brewer (called KB) and Joe Larot (Punkee), began reaching out to like-minded dance friends in the Southern California hip-hop community. “We had this idea to create a crew that wasn’t about any individual dancer, but about the overall piece of art that we were creating, the way that we collectively moved,” Brewer said.

The name came from “Jabberwocky,” Lewis Carroll’s nonsense poem about the fearsome Jabberwock, in “Through the Looking Glass.” The evocative eclecticism of Carroll’s invented world and words reflected what Brewer and Larot wanted the Jabbawockeez to be: a sui generis character with its own dance vocabulary. “We like to refer to Jabbawockeez as an alien that comes down to earth to dance with y’all,” Larot said.

Brewer also found inspiration in Jeet Kune Do, Bruce Lee’s hybrid philosophy of martial arts. As Lee combined elements of different combat disciplines, the Jabbawockeez would combine dance and music styles often considered incompatible, a practice Brewer called Beat Kune Do. Their dance foundation coming up, Brewer said, was “popping, locking, we have some house, B-boy moves, breaking — that covers a wide range.” Beat Kune Do, he added, uses all these different movement styles, “mixing them together to create infinite combinations of movement.”

The Jabbawockeez’s masks began as something of a party trick: a superhero-style disguise that both unified and camouflaged the eight original dancers. At early showcases, the performers would change outside the dressing rooms to maintain their cover, to the point where even others in the hip-hop scene didn’t know who the Jabbawockeez were.

“It was on some Peter Parker, Spiderman-type stuff,” Nguyen said. “It gave us this level of anonymity where we’d show up, kill the show, and then disappear.” Over time, the crew began to recognize the power of the gimmick. “It was a really simple way to break everyone’s mold of what you thought a dancer was or was not, could be or could not be,” Larot said. “It allowed us to dream without boundaries.”

The fledgling Jabbawockeez attracted the attention of hip-hop choreographers and creative directors Tabitha and Napoleon Dumo. When the Dumos became supervising choreographers for MTV’s “America’s Best Dance Crew,” they encouraged the Jabbawockeez to audition for the inaugural season in 2008, recognizing their unusual charisma. “The show’s producers didn’t get it,” Napoleon said. “They were like, ‘Nobody wants to watch dancers not giving any facial expressions.’ And we were like, ‘Nope, trust us, they’re going to win the whole thing.’”

The Jabbawockeez did win the whole thing, amassing a large fandom along the way. The crew’s members also unmasked for behind-the-scenes segments, revealing their identities publicly for the first time — which made minor celebrities of the dancers, and helped choke off the impersonating masked groups that had sprouted as far away as the Philippines. Above all, their popularity on the show demonstrated the marketability of a well-packaged hip-hop dance crew. It “was proof that these guys can take the stage, these guys can hold the stage, and these guys will entertain you in a way that you won’t see coming,” Tabitha Dumo said.

The Jabbawockeez parlayed that triumph into commercial projects, appearing in ads for Pepsi and Gatorade and opening for New Kids on the Block on tour. In the spring of 2010, a private performance at a birthday party turned into an audition when the crew found out representatives from MGM Resorts were in attendance.

The crew ended up booking a trial run of sorts: a limited engagement at the MGM Grand during the resident artist David Copperfield’s weeks off. The Jabbawockeez brought on the Dumos, who had worked on several Las Vegas productions, to help create a 90-minute show. The result, “MUS.I.C.,” incorporated a diverse soundtrack, simple storytelling and playful humor. “We realized comedy was a big part of the brand,” Napoleon said. “It was as simple as somebody picking their nose in the mask.”

That wide-net approach worked. With the backing of the MGM machine, the crew mounted three more Las Vegas productions, as well as shows in locations as far-flung as Australia, over the next decade. A few years ago — “when some of us began to hit 40,” said the dancer Rynan Paguio (Kid Rainen) — the remaining original members stopped taking the stage regularly, focusing instead on directing and producing. Now a new generation of dancers, many of them mentees of the founders, perform in Las Vegas and beyond.

The Jabbawockeez have always been a diverse, majority Asian American group. (Thirteen of the current crew members identify as Asian American, four as African American, two as Hispanic, and one as Caucasian.) They view racial diversity as intrinsic, but not central, to their artistry and brand.

“When we came up, man, we were just all mixed together, all different races, all over Southern California,” Brewer said. “Being around so many different kinds of people was just normal.” That colorblind mentality remained as the crew’s profile and reach grew. “We’ve never looked at ourselves as an Asian crew, or a diverse crew,” Nguyen said. “We’re just a dance crew that, if this is a buffet, you’ve got Mexican food over here, you’ve got some food from Vietnam, everywhere.”

But the Jabbawockeez’s choice to mask — obscuring individual identity and race to emphasize uniformity and universality — relates to a larger debate among hip-hop dancers and scholars, which gained momentum during the social justice movements of the past year.

Dr. Grace Shinhae Jun, a professor of dance at the University of California, San Diego, who studies hip-hop dance and culture, said she sees both the appeal and the danger of the Jabbawockeez disguise. “I understand the call of, ‘focus on the dance, focus on the movement,’” she said. “Hip-hop has always united people, and it’s been a place for Asian Americans in particular to experience community, what it means to be American in a way that’s not rooted in our own cultures.”

Hip-hop, though, is a Black cultural art form. And while Jun believes there is a place for everyone in hip-hop, by saying it’s universal, “You’re erasing the culture that it comes from,” she said. “Once you remove it from its context, what does it become, and what are you trying to do?”

Brewer, Larot, Nguyen and Paguio are now not just dancers but also co-owners of the Jabbawockeez. On their personal social media accounts, they have all expressed support for social justice movements. But they are still adjusting to their roles as leaders speaking on behalf of a corporation. (“We were a garage dance crew! We were professional at counting to 8 — to a measure of 8!” Larot said, laughing.) All of them said that to break character by engaging in political or social issues on the Jabbawockeez’s popular Instagram or YouTube pages would risk hurting a brand that now supports multiple families. (Brewer has four children; Larot, two; Paguio, one.)

“I do feel this wrestling, where we do have this platform, and I do want to say something to show support for the people, right?” Brewer said. “But at the same time, the weight of it and how big it is … if I take my mask off and say the wrong thing, and somebody’s like, ‘Hey, you just said the wrong thing, Jabbawockeez going down’ — I don’t want to jeopardize anything.”

So the Jabbawockeez have chosen to stay focused on another part of the hip-hop ethos: “peace, love and having fun,” as Paguio said. Onstage, and to some extent off, they remain masked. “They have this character, and then they have such flexibility within that character, and that equals longevity,” Tabitha said. “I mean, that’s how Mickey Mouse has survived 100 years.”

One hundred years of Jabbawockeez? It’s not inconceivable. The crew’s Vegas shows have become reliable dance gigs in an entertainment industry otherwise infamous for its instability. “Timeless” is playing 10 shows a week to crowds about 500 strong, in a smaller space carved out of the cavernous MGM Grand Arena. But the owners have floated the idea of one day performing to the arena’s full 16,000 seats.

“Hopefully at some point, you know, it’ll be all of Vegas — all of the world!” Paguio said. Brewer added: “And a partridge in a pear tree.”