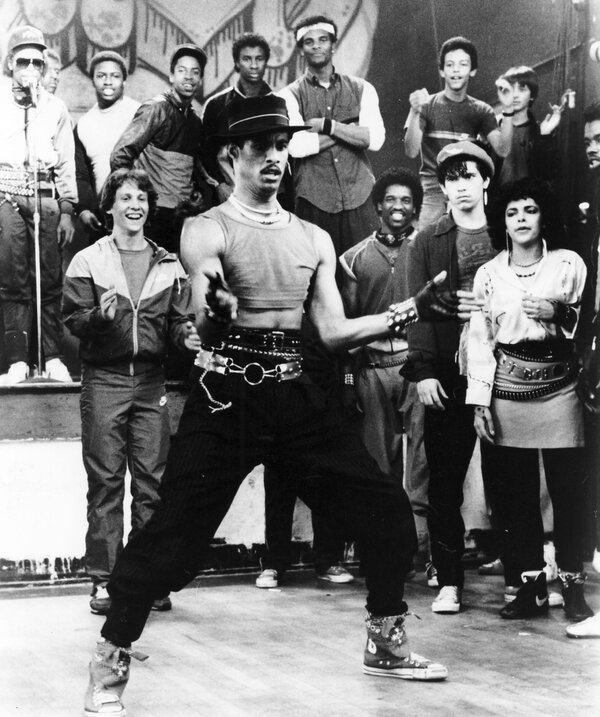 Adolfo “Shabba-Doo” Quiñones, who grew up dancing in a bleak public housing project in Chicago and went on to become a pioneer of street dance in the 1980s and one of its first celebrities after appearing in the hit movie, “Breakin’,” died on Dec. 29 at his home in Los Angeles. He was 65.

His manager, Robert Bryant, confirmed the death but said the cause had not yet been determined.

In 1984, street dancing was an urban art form little known to many Americans, but the release of “Breakin’,” starring Mr. Quiñones as a Los Angeles break dancer named Ozone, helped change that.

Ozone, who wears red Chuck Taylor sneakers and a brim hat, spends his days busting flashy moves in Venice Beach with his partner, Turbo (Michael Chambers). A classically trained dancer named Kelly (Lucinda Dickey), captivated by their style, joins their troupe. Her stern (and handsy) teacher disapproves of street dancing, so she flees his school. The three enter a prestigious dance contest, and against the odds they (of course) win.

The movie, produced for less than $2 million (the equivalent of about $5 million today), was a surprise hit, raking in over $35 million at the box office in 16 weeks. A sequel, “Breakin’ 2: Electric Boogaloo,” was released a few months later. Mr. Quiñones quickly became a star of street dancing.

“Ultimately people will realize it’s a valid art form, on the same level as jazz or ballet,” he told Newsweek in 1984. “And it’s a dance Americans should be proud of.”

Throughout the 1980s, Mr. Quiñones’s dancing appeared across the pop culture landscape. He shimmied in the video for Chaka Khan’s “I Feel for You,” and he was the choreographer and lead dancer of Madonna’s “Who’s That Girl?” world tour in 1987. He also choreographed (and appeared in) the video for Lionel Richie’s “All Night Long” and advised Michael Jackson on the video for “Bad.” Us Weekly called him the “Bob Fosse of the Streets.”

“Shabba-Doo was an absolute Los Angeles dance legend,” the rapper Ice-T, who appeared in “Breakin’” and its sequel, said in a statement to The New York Times. “We throw that word around. But not anybody can say they invented an entire dance style.”

He danced as a teenager on “Soul Train” with an influential ensemble called the Lockers. That group, which also featured Don Campbell, Toni Basil and Fred Berry, became known for its development of the “locking” technique, typified by rhythmic, freezing dance movements. Together, they appeared on “Saturday Night Live” and “The Tonight Show Starring Johnny Carson.”

After he left the group in 1976, Mr. Quiñones appeared on Broadway with Bette Midler in “Bette! Divine Madness” and helped advise the dancers in the 1980 movie “Xanadu.” By the 1980s, cultural interest in hip-hop dancing was developing, thanks in part to movies like “Wild Style” and “Beat Street”; when “Breakin’” was released in 1984, Mr. Quiñones rode the groundswell.

“We were real street dancers,” he told the blog Black Hollywood File in 2008, reflecting on the movie’s success. “We weren’t something that was manufactured by Hollywood.”

“Hip-hop may have a multicultural face, but let’s not be fooled, because it did come from our people,” he added. “It did come from Black people, and Africans, and Puerto Ricans and all that too. Just like blues and jazz. But now it’s the world.”

Adolfo Gutierrez Quiñones was born on May 11, 1955, in Chicago and grew up in the Cabrini-Green public housing projects with four siblings. His father, Adolfo, had been born in Puerto Rico and became a salesman and a laborer. His mother, Ruth (McDaniel) Quiñones, was an accountant whose family had moved from Mississippi to Chicago during the Great Migration. The urban landscape of his childhood was harsh, and his older brother protected him from gangs in the complex, but he found solace in dance.

As a boy, he bopped while his mother played Tito Puente records and cooked rice and beans. He liked watching musicals on television and became mesmerized by the footwork of Fred Astaire, Cab Calloway and the Nicholas Brothers. At family gatherings, he tried out his moves.

“My mom used to throw me out there like a fighting chicken,” he told The Chicago Tribune in 1987. “‘Go out there and dance for Mom,’ she’d say. And they’d give me a little cup of wine to get me going. That’s how it all started.”

In the 1970s, his family moved to the Los Angeles area. He began dancing in clubs around Crenshaw Boulevard and at venues like Radiotron, near MacArthur Park. Break-dance culture was growing at these establishments, and he dueled nightly in them with rivals on the dance floor. He started calling himself Sir Lance-a-Lock, which then became Shabba-Dabba-Do-Bop, which was finally shortened to Shabba-Doo.

The sequel to “Breakin’,” in which the original trio tries to stop the demolition of a community center, wasn’t as successful as the original, but that hardly diminished Mr. Quiñones’s rising star. He began driving a Jaguar. He bought a house. Fans waited in his driveway with boomboxes in hopes he’d emerge.

In the 1990s, he acted in the dance movie “Lambada” and studied at the American Film Institute. He also briefly lived in Tokyo, where he ran a dance studio. In 2006, he appeared in Three 6 Mafia’s performance of “It’s Hard Out Here for a Pimp” on the Academy Awards telecast.

Mr. Quiñones is survived by his mother; a son, Vashawn Quiñones; a daughter, Cassini Quiñones; a sister, Fawn Quiñones; two half brothers, Eric Vaughn Smith and Philip Smith; a half sister, Giana Beaudry; and three grandchildren. His marriages to Gwendolyn Powell and the actor Lela Rochon ended in divorce.

Over the last decade, Mr. Quiñones worked as a private dance instructor in Los Angeles, teaching techniques he developed with names like “shway style” and “waackin’.” He became a Jehovah’s Witness, and in 2019 he finished writing a memoir, “The King of Crenshaw,” which chronicled his childhood in the projects of Chicago and his rise to fame.

He also watched as street dancing was ushered into a slick modern era.

The “Step Up” movie franchise, which began in 2006, has grossed over $600 million, and last year the International Olympic Committee announced that breaking would be introduced as a competitive sport in 2024.

Mr. Quiñones was glad to see a style he had helped create reach new heights, but he was critical of what he perceived as the increasingly technical and athletic nature of modern hip-hop dance.

“Enough with the dancing on Hummers and bungee cording off buildings and things like that!” he told the pop culture website Icon Vs. Icon in 2014. “I think dancing is strong enough to hold its own and we don’t need all of this trickery.”

He referred to the “Step Up” movies as derivative “cotton candy versions” of “Breakin’,” adding, “I want a fair and accurate depiction of the life of a street dancer.”

And while he was heartened by the news about the Olympics, he told Yahoo Life that he worried the roots of his art form might be forgotten.

“Street dance is a personal journey for most of us,” he said. “How are you going to have these judges judge that?”

A new release date has been given to A Quiet Place Part II. The horror film was originally supposed to...