Audiences on Monday got a first look at Andra Day as Billie Holiday with the release of the first trailer for a hotly anticipated biopic.

Directed by Lee Daniels, “The United States vs. Billie Holiday” takes an intimate look at the legendary jazz vocalist. The film is billed as a portrait of a “fierce trailblazer whose defiance through music helped usher in the civil rights movement” and had been intended for a theatrical release before COVID-19 was declared a pandemic. It now is slated for a Feb. 26 release on Hulu.

“Whether you are new to the story and legacy of Billie Holiday or know every note she ever sang, I do hope our celebration of this complex woman does justice to a great musical legend and civil rights activist whose artistry resonates as well today, as it did 80 years ago,” Daniels, whose credits include the 2009 film “Precious” and the Fox TV series “Empire,” said in a press release. “Hulu releasing this film and giving it a platform to be seen nationwide is a blessing, because as recent events reveal, our country has much work to do in fulfilling its promise of a more perfect union.”

Holiday rose to fame in Harlem’s nightclub scene and, in 1938, became one of the first Black women to front an all-white band. Her recordings of songs like “God Bless the Child” and “I’ll Be Seeing You” remain standards. 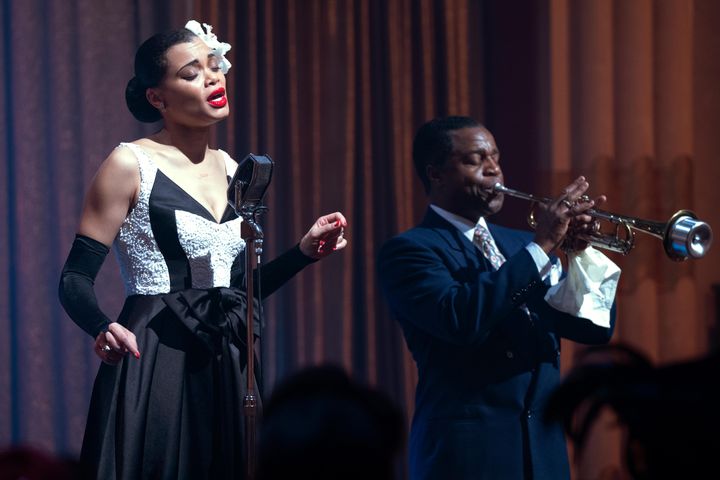 With a screenplay by Suzan-Lori Parks, “The United States vs. Billie Holiday” focuses primarily on the creation of Holiday’s 1939 song about lynching, “Strange Fruit,” which made her a target for the FBI.

Holiday died from drug and alcohol-related complications in 1959 at age 44. She was memorably portrayed by Diana Ross in 1972’s “Lady Sings the Blues.” In 2014, actor Audra McDonald won a Tony Award for playing Holiday in Broadway’s “Lady Day at Emerson’s Bar and Grill,” and two years later, received an Emmy nomination for the role when that production was filmed for an HBO broadcast.

In an interview published Monday, Day said she strove to portray Holiday as not having a “victim mentality.”

“She was Black, at that time in this country, period, but she was not a victim in the mind,” she told V Magazine. “I hope this is a revelation.”

Watch the trailer for “The United States vs. Billie Holiday” below.