LOS ANGELES — For the first time in its history, the recessed, ground-floor gallery at the Marciano Art Foundation looked like the backstage of a women’s fashion show. A clothing rack held odd garments and hair extensions, a model sat having her makeup touched up, and others shuffled around in white robes.

But when these eight models — a mix of cisgender women and trans performers of different races — walked out past a large scrim and drifted onto an island of white sand to pose near colorful steel sculptures, they moved extremely slowly, with no hint of a runway swagger. And they wore body paint in place of clothes: a blue bikini-like form here, a green chaps-like shape there. The only tangible garments were see-through vinyl and molded-plastic pieces worn for warmth.

It’s a new twist by the Berlin-based artist Donna Huanca on the work of Yves Klein, who drenched nude models in his bright blue paint starting in the late 1950s. And it’s a new use for a space that, pre-Marciano, was a 2,400-seat theater where male members of the Scottish Rite Masonic Temple staged their own plays to attain higher levels of initiation or “education.”

“The Masonic theater only allowed women inside on certain occasions,” Ms. Huanca, 38, said while installing her new show, “Obsidian Ladder,” at the Marciano. “So it feels very powerful to take up space in this architecture with femme mark-making and with models who represent a range of femininity.” 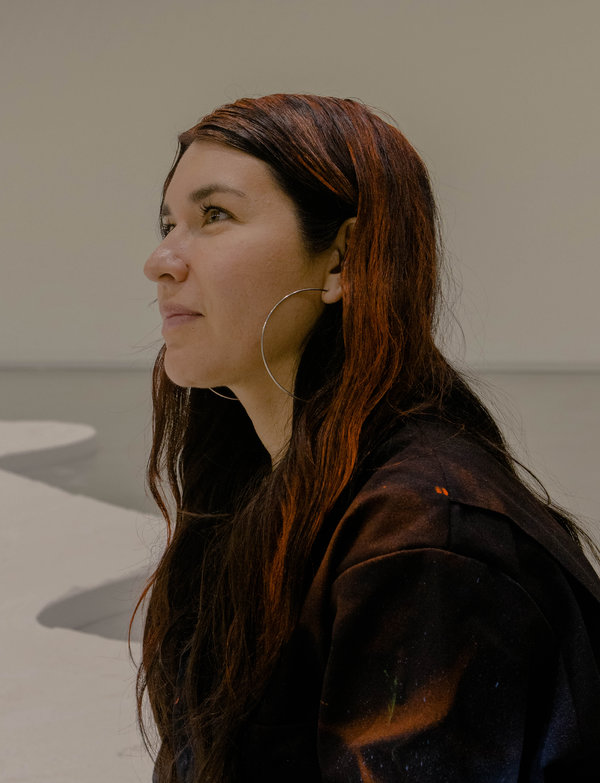 She has installed nine of her Cubist-looking steel sculptures and a large photo-based canvas in the cavernous space, making it seem less imposing with scrims and bright lighting. The air is filled with a soundtrack of natural noises like fire and water and a pungent scent that smells like burned wood. (“To me it smells like a witchcraft market I like in Mexico City — burnt feathers and bleach,” she said.) The slow-moving models will appear, two at a time, in the exhibition every Saturday for the show’s run, through Dec. 1.

“The previous shows here played with the darkness of the theater,” said Ms. Huanca, wearing a paint-splattered black jumper and some fierce-looking talon-shaped red nails. “With the light, the models, the scent and sounds, you’re entering a whole new landscape.”

Cecilia Fajardo-Hill, an independent curator not connected to the show, calls it a “ritualistic landscape where she explores the fluidity and complexity of identity, femininity, nature, culture.” She relates Ms. Huanca to a previous generation of Latin American artists interested in the female body, including Cecilia Vicuña, Ana Mendieta and María Evelia Marmolejo. “She belongs to the tradition of body art, showing how the body, the subject of so much political violence, is a creative space that can be reclaimed by artists,” she said.

So this isn’t the same as Klein’s directing women to smash their painted breasts against large sheets of paper to make artworks. But isn’t it still at some level exploitative to ask women to pose naked before strangers?

“That’s such a natural reaction because women have been exposed in art, exploited by artists, for so long,” Ms. Huanca said. “But these models have complete agency. They have the right to take breaks or leave whenever they want. I’m paying everyone above an average ‘life model’ wage. Their voices are included in the catalog we’re making. Their names are on the walls. I want them to be collaborators.”

One model, Iiia Anxelin Eleuia Xochipilli, who identified herself as a performance artist of Apache descent, said: “I think it’s really cool that she’s working with models of different shapes who are trans, cisgender, nonbinary. There are no men allowed, even among the security guards. She keeps it really safe for us.”

Olivia Marciano, the institution’s artistic director and daughter of the museum co-founder Maurice Marciano, added that she found Ms. Huanca’s work “meditative,” not sexual. After seeing a similar installation by Ms. Huanca at the Belvedere Museum in Vienna last year, she invited her to take over the Marciano project space for her first big museum show in the United States.

Ms. Huanca grew up in Chicago with Bolivian immigrant parents: her father worked as a Berlitz language teacher, her mother as a travel agent. She spent summers in Bolivia, until the family decamped to Houston when she was 15. “My older brother was in a gang in Chicago and we had to duck to get him out,” she said.

Before she painted skin, she liked to paint clothes. In Texas she discovered both an underground music scene, playing the drums in various bands, and contemporary art. She studied painting at the University of Houston, getting her B.F.A. in 2004, but wasn’t, to the dismay of her teachers, interested in canvases — “too expensive,” she said. Instead she bought thrift-store garments to cut up and turn into collages or rub with pigment.

In 2006 she did the summer program at the Skowhegan School of Painting and Sculpture in Maine, starting what she calls “my hobo life of residencies and finding ways to work with nothing” — moving between New York and Berlin with a stay in Mexico City as well. There, in 2012, she dipped garments like a velvet dress and leather shorts into paint and hung them on the wall for a show at the Preteen Gallery. A couple of years later, in Brooklyn, she began experimenting with painting directly on the skin of friends.

Her biggest attention-getter came in 2017 at Art Basel, when her gallery, Peres Projects, presented her work in the Unlimited section, devoted to venturesome artists. For an eight-day, eight-hours-a-day performance, she painted the skin of two nude models and set them adrift in her own sculptural installation. Sabine Schaschl, director at Museum Haus Konstruktiv in Zurich, was among many who shared images on Instagram, writing, “Lock eyes with a model and the lines between looking and being looked at begin to bend.”

At the time the artist was painting skin by hand, waking up around 5 a.m. to create a new pair of body paintings every day. For the Marciano show she is using machine sprayers, giving each model a set pattern and palette to be replicated through the show. Some are painted to match the sculptures they stand near — more or less camouflaged.

Ms. Huanca likes to include natural materials like turmeric and coffee grounds in her canvases, body paintings and sculptures alike. This time, she dusted turmeric on the models’ shoulders. For the hair extensions, she initially used horsehair but switched to synthetics a couple of years ago. “I got an extension where some pieces of skin were left on,” she said, “and I said: ‘I’m done with this.’ It felt cruel and abusive.”

It wasn’t the right visual, to say the least, for art that celebrates the flesh.