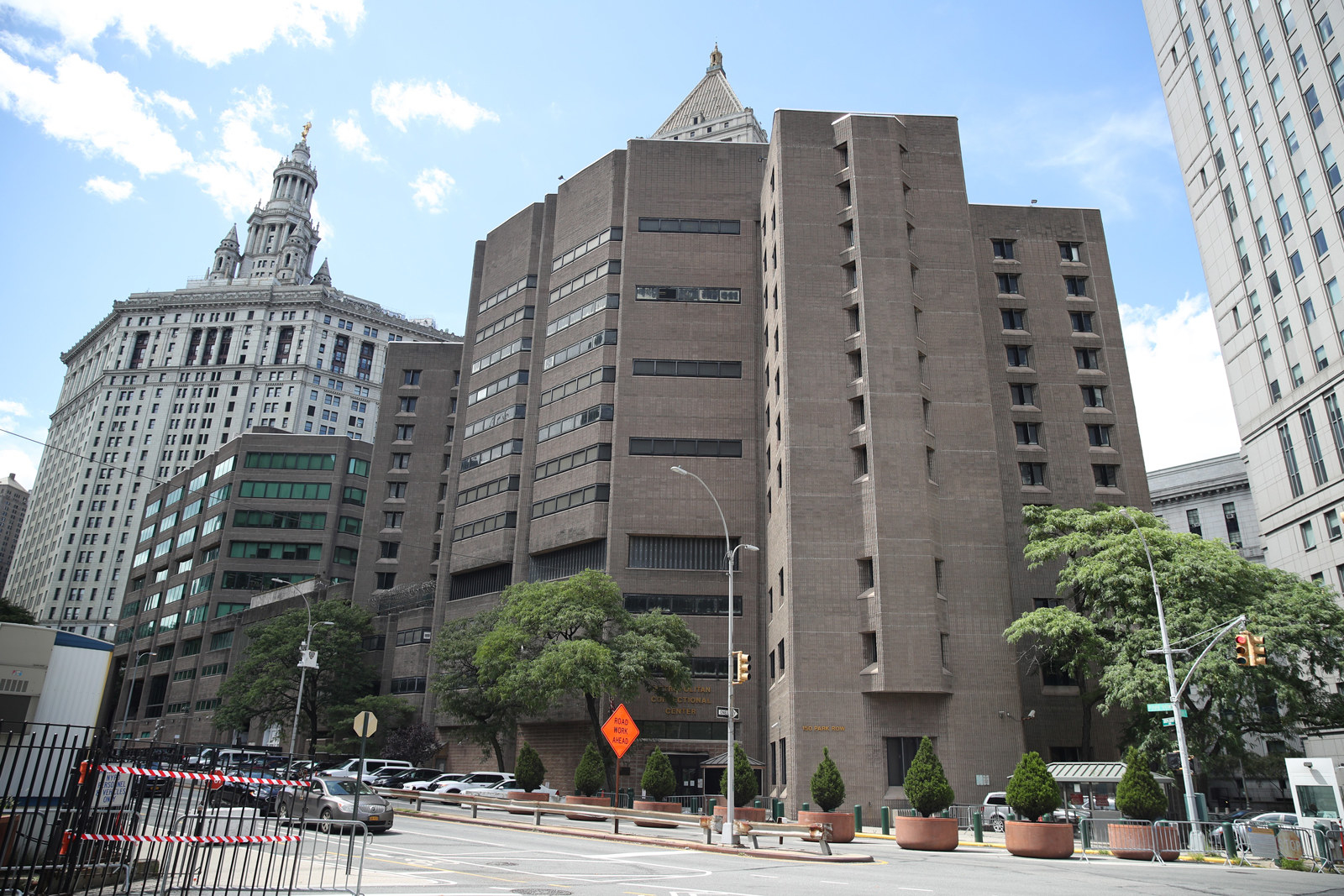 The Manhattan Correctional Center where Jeffrey Epstein was found dead on Aug. 10.

The New York City Fire Department looked into whether an employee posted about Jeffrey Epstein’s death on a notorious internet message board prior to officials announcing it to the public, BuzzFeed News has learned.

After telling BuzzFeed News the post was “under review,” an FDNY spokesperson said authorities “determined this alleged information did not come from the Fire Department.”

“An investigation is a formal act which brings about a process which includes interviewing witnesses, serving notice, determining credibility of witness statements — and that was not warranted nor did it take place here. This determination was made after a review of the incident. We looked at the information provided by [a BuzzFeed News] reporter and we looked at our own records and there was no match,” said FDNY spokesperson Frank Dwyer, who added that the FDNY’s Office of Healthcare Compliance conducted the review. “It doesn’t match our medical records.”

“[D]ont ask me how I know, but Epstein died an hour ago from hanging, cardiac arrest. Screencap this,” read the post, which was published at 8:16 a.m. alongside an image of Pepe, the green frog that has become a mascot for right-wing internet trolls.

After publishing the post, other 4chan users egged on the author. When they expressed doubt, the original poster added more information to the discussion thread, including a detailed breakdown of the procedures allegedly used to resuscitate Epstein, which suggest the poster may have been a first responder, medical worker, or otherwise privy to details about efforts to resuscitate the disgraced financier.

Dwyer told BuzzFeed News he “could not verify the accuracy” of information in the 4chan post. But he said any medical professional who divulges patient information without consent is in violation of a federal health privacy law, HIPAA, and that FDNY would look into it.

Oren Barzilay, the president of the union for EMT workers Local 2507 in New York, said, “our members do not release this type of confidential information, this looks like a 3rd party info.” Barzilay also told BuzzFeed News the union would investigate the potential breach of confidentiality “if such a claim came forward.”

The medical examiner’s office and the Metropolitan Correctional Center both declined to comment. Spokespeople for the New York Presbyterian Hospital have not responded to repeated emails and calls requesting comment.

The full details of Epstein’s death won’t be known until the final coroner’s report is released, meaning the 4chan post laying out the alleged treatment he received cannot be fully verified. An EMS expert contacted by BuzzFeed News said the details in the post are consistent with standard practices. Information released by the Federal Bureau of Prisons also appears to line up with some of what was posted on 4chan.

Dr. Keith Wesley, an emergency medicine physician who has authored several EMS textbooks and articles, viewed the 4chan post at BuzzFeed News’ request and said it lays out standard procedures for paramedics.

“This sounds like standard American Heart Association guidelines, which most EMS agencies use,” Wesley said.

Part of the post refers to “telemetry advised bicarb.” According to Wesley, this could mean the first responders were also speaking with the hospital as they were trying to resuscitate their patient. 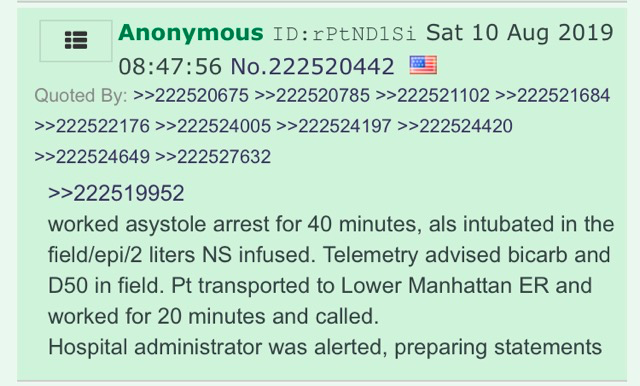 “Telemetry implies the paramedics were in contact with a medical control hospital who then gave orders to give Sodium Bicarbonate, bicarb which is designed to reverse the acid buildup in the blood from prolonged cardiac arrest,” Wesley said in an email.

“If one of the medics posted this separately that’s a breach of protocol,” he added. “If there was identifying information on the patient, that is a violation of Federal HIPPA law.”

The 4chan user made six posts about Epstein’s death. One of them claimed that attempts to resuscitate Epstein were made for 40 minutes before he was transported to the hospital, at which point medical personnel tried to revive him for another 20 minutes. Those details are at least partially consistent with the information regarding Epstein’s death that have been publicly released by the Federal Bureau of Prisons.

“Staff requested emergency medical services (EMS) and life-saving efforts continued,” said a statement released by the Department of Justice’s Federal Bureau of Prisons on Saturday. “Mr. Epstein was transported by EMS to a local hospital for treatment of life-threatening injuries, and subsequently pronounced dead by hospital staff.”

It’s not clear who posted the news of Epstein’s death on 4chan, but first responders and hospital staff would have access to information laid out in the post.

The reaction of 4chan to the news was explosive. Some users didn’t believe the author while others launched straight into conspiracy theories that have since engulfed news of Epstein’s death.

The 4chan thread was first found by Konrad Iturbe, a developer based in Barcelona who was researching conspiracies surrounding Epstein online.

Konrad Iturbe’s name was misspelled in a previous version of this post. 12 Aug 20
Stephen “tWitch” Boss, one of Ellen DeGeneres’ most visible colleagues, is breaking his silence over…
Entertainment
0

20 Apr 20
Prince Harry, Duke of Sussex and Meghan, Duchess of Sussex attend one of their last…
Entertainment
0