CODOGNO, Italy — On Sunday afternoon, several hundred people gathered in the small town of Codogno, about 35 miles south of Milan.

The group, including local dignitaries, army veterans and hospital workers, were meeting for the unveiling of a small garden, featuring a quince tree and a sculpture with three steel columns. Inscribed on a platform below the columns were the words “Resilience,” “Community” and “Restart.”

The garden is one of Italy’s first memorials to those who have died after contracting the coronavirus, and it was dedicated on the anniversary of the day news broke that a 38-year-old resident of Codogno, who became known as “Patient One,” had been diagnosed with the virus. That man was Italy’s first known case of local transmission. The next day, police sealed the town, and no one could enter or leave.

“It was horrific, absurd and unimaginable that this nightmare could unfold in Codogno,” Francesco Passerini, the town’s mayor and the driving force behind the memorial, said in a telephone interview before the ceremony. “Nearly everyone has lost someone,” he added.

Giovanna Boffelli, 71, who watched the event on Sunday, said the garden was a fitting tribute to Codogno’s strength in the face of the pandemic. “We are simple countryside folk, and we roll up our sleeves when the going gets tough,” she said. “Like us, the memorial is simple, strong and unpretentious,” she added.

For some, it may seem too early to create a memorial to a pandemic that is still raging. More than 200 people were reported to have died from Covid-19 in Italy on Sunday, and the country is in a state of emergency until at least the end of April, with strict travel restrictions in place.

But the memorial in Codogno — and others planned elsewhere in Europe — are not intended as sweeping monuments to the historical moment, but simple places to grieve and reflect.

Earlier this month, local officials in the town of Barnsley, in northern England, revealed the design for a statue that will be installed there in November, featuring a nurse, a teacher and other essential workers. In a news release, the officials said it would be “a tribute to key workers and unsung heroes of the pandemic.” 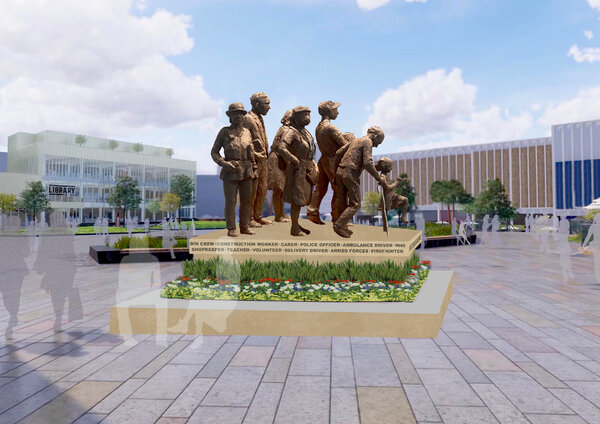 Several other towns and cities in Britain, including London, have announced plans for memorial gardens.

Avril Maddrell, a geographer at the University of Reading, in England, who has researched public memorials, said in an email exchange that since national governments tend to memorialize public figures, rather than private individuals, others were stepping in. “In the absence of a national discussion or plans for a memorial to those who have died from Covid-19, families and groups are filling the void,” she said.

“They want to recognize the deaths of those individuals, as well as to express a communal sense of shared loss and shared remembrance,” Maddrell added.

Carlo Omini, an architect who designed the memorial in Codogno, said that the town’s residents “feel the need to commemorate the people who have passed away and look for a place other than a cemetery to stop in prayer.”

“Unfortunately, the pandemic is not over, I am aware of it,” he said in an email. “But I believe that starting from these symbolic places can help.”

The Codogno memorial is not the first in Lombardy, one of the Italian regions first affected by the coronavirus. Last August, the nearby town of Casalpusterlengo unveiled a memorial designed by Ottorino Buttarelli, a local artist, featuring stones piled into a small tower, to represent townspeople who have died.

In an email exchange, Buttarelli said he had involved the town’s residents in the memorial’s creation. He asked them to go to the nearby Po river to collect stones for the structure, and many wrote the names of loved ones they had lost on them, sometimes adding personal messages or decorating them with stars and hearts.

“We realized the need and urgency people had to mourn,” Buttarelli said. “People in this village were left to die in solitude and silence, often without a funeral. Bringing the stone and writing the name became the funeral,” he continued.

While the Italian memorials have been intimate and local in character, in Britain, there have also been calls for more traditional monuments. Earlier this month, The Daily Mail, a conservative tabloid newspaper, started a campaign for a statue to be erected in memory of Tom Moore, an army veteran, better known as “Captain Tom,” who raised tens of millions of pounds for Britain’s health service during the pandemic. He died from Covid-19 in February.

Jeremy Deller, a British artist who has designed several works of public art, said in a telephone interview that making any large central memorial to the pandemic would be difficult: It has no clear icons, and simply too many people had died to write all the names on a single structure, like a war memorial.

His own proposal — which he created as a print and offered for sale in a drive to help British museums struggling during the pandemic — was a huge, golden statue of a pangolin. Scientists once thought that the virus may have jumped from pangolins to humans (though many now reject that suggestion), and the fantasy monument could make people think about humanity’s relationship with animals, Deller said.

In Barnsley, Graham Ibbeson, the sculptor behind a proposed memorial, said in a telephone interview that he had initially worried it was too soon for such a memorial. “I didn’t want to do it at first,” he said. “I thought if there was a war going on — and this is definitely a war — would you put up a memorial in the middle of it?”

But town officials asked him to, and he agreed because it could be a symbol of hope, he said. His statue will not only feature seven figures to represent those who had worked selflessly during the pandemic, but also plants running up its plinth to give a sense of life, and local children’s drawings of key workers to provide a little humor and warmth.

“Who knows if we’ll ever get through this,” Ibbeson said, “but the vaccines are a symbol of hope in this moment of darkness, and that’s how I see this sculpture.”