MUNICH — Gottfried Böhm, the Pritzker Prize-winning architect who was known for his strikingly sculptural concrete buildings and as a leader of a generation of German architects whose task was nothing less than rebuilding their country in the wake of World War II, died on Wednesday at his home in Cologne. He was 101.

His son Paul, who is also an architect, confirmed the death.

Mr. Böhm was considered one of his country’s leading architects long before he won that coveted award, often considered the Nobel for architecture, in 1986. Like his father, the expressionist architect Dominikus Böhm (1880-1955), he was highly regarded as a builder of churches. His first, completed in 1949, was Madonna in the Ruins, a chapel that is now part of the Kolumba museum complex in Cologne, a city whose postwar reconstruction he was particularly involved in.

Mr. Böhm built the chapel on the site of an early medieval parish church, dating to the year 980, that was destroyed by Allied bombs in 1943. His design incorporated the church’s few surviving elements, including the exterior walls, the northeast pillar of the main nave and the 15th-century life-size statue of the Virgin Mary that lent the reconsecrated church its name.

“Mountains of rubble flowered beautifully there,” Mr. Böhm said of postwar Cologne in a 2014 documentary film, “Concrete Love — The Böhm Family.” “It was a mountain world. It fascinated me.”

Like Madonna in the Ruins, many of his buildings created a dialogue between old, often violently destroyed edifices and modern designs and materials. 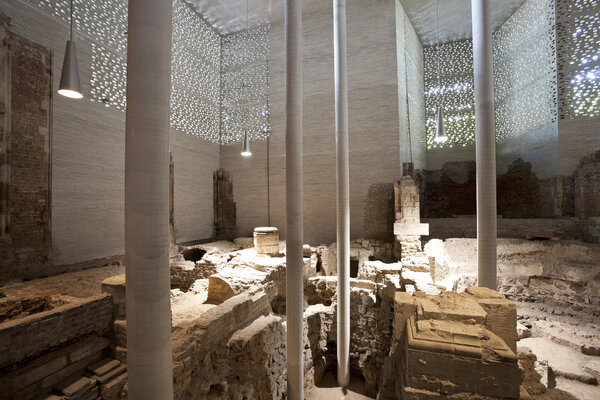 During the Pritzker Prize ceremony, in Goldsmiths’ Hall in London, Prince Richard, the Duke of Gloucester, himself an architect as well as a member of the British royal family, paid tribute to Mr. Böhm, citing “the confidence with which he sites his new structures onto the remains of older structures, linking the future with the past.”

Arguably the defining work of Mr. Böhm’s career was the Roman Catholic Pilgrimage Church at Neviges, known in German as the Wallfahrtsdom or the Mariendom, close to the city of Wuppertal in northwest Germany.

Completed in 1968, it is a monumental Brutalist Gesamtkunstwerk or total of work of art, whose jagged concrete roof has been likened to a tent, a crystal and an iceberg. Set at the top of a hill, the church rises imposingly above the picturesque houses of medieval Neviges.

Mr. Böhm lavished as much attention on the church’s forum-like interior as he did on its folding roof and sculptural facade, with their rough concrete textures and sharp angles. He designed the stained-glass windows, lamps and door handles and even the chairs. With room for 8,000 worshipers, it is the second largest church north of the Alps.

Assessing the Pilgrimage Church in an appreciation of Mr. Böhm in 1981, the American architect Donald E. Olsen hailed his “ability to dematerialize this massive structure of modern concrete technology through the application of sheer volume, shape and light-modulation.”

Along with Le Corbusier’s proto-Brutalist “La Chapelle Notre-Dame du Haut” (1955), the Pilgrimage is regarded as one of the 20th century’s most important churches. It was cited by the Pritzker jury when they awarded Mr. Böhm their prize and remains the most famous of the more than 70 churches he built over his career.

Gottfried Böhm was born on Jan. 23, 1920, in the river city of Offenbach-am-Main, near Frankfurt, the youngest of three sons of Dominikus and Maria Böhm. His paternal grandfather was an architect as well. As a child, Gottfried enjoyed going to his father’s studio and designing windows and other simple architecture details.

He was drafted into the Wehrmacht in 1939 and served until being wounded during the Russia campaign in 1942 and sent back to Germany. He rarely spoke about the war, but in the 2014 documentary he recalled a slaughter in the High Tatra Mountains. “My task was to shoot,” he said. “We were mountaineers. There was a murderous hail of bullets, and we suffered many losses. Right next to me. Right in front of me.”

After he was demobilized, he studied architecture at the Technical University in Munich, where he received a degree in 1946. He spent another year studying sculpture at that city’s Academy of Arts, in what he later called an attempt to distance himself from his father, who considered Gottfried his successor and whom Gottfried was afraid to disappoint. Even though Mr. Böhm eventually chose the architect’s path, his training as a sculptor remained foundational and would inform his most distinctive works.

After Munich, Mr. Böhm returned to Cologne to work in his father’s firm, which he took over after Dominikus’s death in 1955, continuing a family business that would come to reach near-dynastic dimensions.

In 1948 he married Elisabeth Haggenmüller, an architect he had met while they were students. She assisted her husband on many of his projects, and they remained married until her death in 2012 in her early 90s. Three of Mr. Böhm’s sons, Stephan, Peter and Paul, all trained as architects and worked for their father’s firm starting in the 1980s. Nowadays they each operate an independent architecture firm under the same roof, in the Cologne home that was built by their grandfather in 1928 and where Gottfried had grown up and once maintained his office. A fourth son, Markus, is a painter. Mr. Böhm is also survived by five grandchildren, two great-grandchildren and an older brother, Paul, who is 102.

In 1951, Mr. Böhm journeyed to America, where he worked briefly at a New York architecture firm. During a monthslong study tour in the United States, he met Walter Gropius and Mies van der Rohe, the Bauhaus masters who became a great inspiration to him. After returning to Germany he became a professor at the Technical University of Aachen in 1963 and held that position until 1985.

Mr. Böhm was one of 17 architects to submit proposals for a new Pilgrimage Church in Neviges in 1964. The town had been a devotional site since the late 17th century, but the rising numbers of pilgrims after World War II had led the Franciscans, who administered it, to decide to build a new church.

Mr. Böhm’s submission was controversial, both for its bold design and its proposal to situate the church at the site’s highest point, above the town, to be reached by processional way laid out according to Mr. Böhm’s plans. It nevertheless won the favor of Cardinal Josef Frings, the archbishop of Cologne, who headed the jury. One account has it that the cardinal, who was nearly blind at the time, liked the feel of Mr. Böhm’s jagged model when he ran his fingers over it.

Completed in 1968, the Mariendom sought to accommodate the thousands of pilgrims who had flocked to Neviges every weekend in the 1950s. Their numbers began to dwindle after the immediate postwar period, as Marian devotion became less conspicuous in the late 20th century. Today the church is arguably more of a pilgrimage site for architecture buffs than for Catholics. (The original church still stands elsewhere in town.)

Another important commission from the same era was the City Hall in Bensberg, close to Cologne. Mr. Böhm sited this concrete structure alongside a 12th-century hilltop fortress. The angular centerpiece is a tower ringed by spiraling windows and capped with a blocky, jagged crown.

It was one of numerous administrative buildings that he designed, in addition to department stores, festival halls and housing developments. Such projects occupied him increasingly after a postwar boom of church construction subsided in the 1970s.

While he worked primarily in Germany, he also designed buildings and development projects worldwide, including in Los Angeles, Boston, Tokyo and Turin, Italy.

Glass became an increasingly important and flexible material for Mr. Böhm. In 1995, commissioned by the clothing retailer Peek and Cloppenburg in Berlin, he designed a six-story building with a facade of layered glass set within a steel case. The New York Times called it “one striking example of what the new Berlin may look like.” In 2000, he unveiled a gleaming glass pyramid that housed the municipal library in the southern German city of Ulm.

Mr. Böhm continued working well into his 90s. A later project of his, from 2006, in collaboration with his son Paul’s firm, is the Hans-Otto-Theater in Potsdam, close to Berlin, whose glass foyer is capped by a fiery red sculptural crown.

Yet Mr. Böhm will be remembered primarily for his churches, many of which have been granted landmark status.

“The idea that life isn’t completely gone with death, that there is something else, is hard to imagine,” he said in the 2014 documentary, in a scene filmed in the Madonna in the Ruins, the chapel he designed over a half-century earlier.

“Churches have something of that as well,” he said. “You feel a relationship with a higher, more distant realm.”