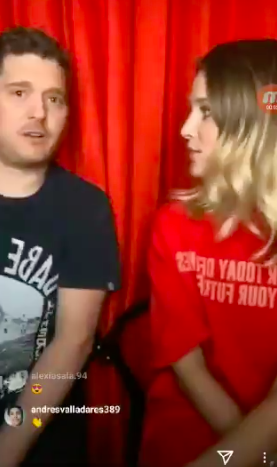 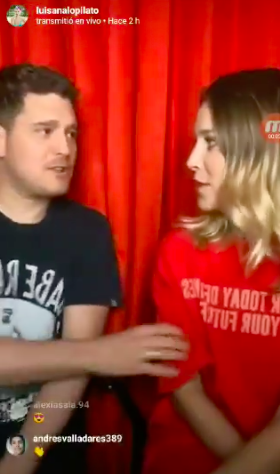 After fans criticized singer Michael Bublé for elbowing his wife, Luisana Lopilato, and aggressively handling her in a recent Instagram Live video, she is now coming to the singer’s defense, telling critics, “I have no doubts who my husband is.”

“It is incredible how some human beings act,” Lopilato, a 32-year-old actor and model from Argentina, wrote in Spanish in an Instagram caption.

She added: “We get together every day with my husband to stream live and bring a bit of joy, entertainment, and hope, and we have to deal with hearing and seeing what malicious people who come out saying things about our family without knowing anything about us.”

Representatives for Bublé did not immediately return BuzzFeed News’ request for comment, but a representative did tell People, “There will be no further commenting on this ridiculous allegation. All anyone needs to do is see them together on Facebook Live every day. They are equal and loving partners and treat each other with the greatest respect. They are a beautiful couple.”

Bublé and Lopilato have been streaming videos on Instagram Live during the coronavirus quarantine, and over the weekend, a short clip of the two went viral. In it, Bublé acts frustrated that Lopilato interrupted him. When Lopilato says “Hola” and speaks over Bublé, he elbows her then grabs her arm and pulls her toward him in the frame.

Fans reposted the clip on Twitter, writing comments like “I don’t know about you, but I saw this and was outraged by Michael’s treatment of Luisana, I was seriously WTF.” Another user tweeted, “I went to see the live and it is a horror. Imposing attitudes, his gaze towards her and the almost forced, sad end. It shocked me a lot.”

One Twitter user posted another video clip of Bublé criticizing Lopilato. “Michael Buble demonstrates aggressive behavior towards Luisana Lopilato. Here she takes 2 min to prepare a dessert for the children and he starts the live alone and reacts like this,” they said.

However, Lopilato called the criticism unfair.

“I want you to know that I have no doubts who my husband is and I would choose him a thousand times more !! It’s not fair!” Lopilato wrote on Instagram. “Without more to say and doing what I think is right when they mess with my family, I leave the consequences to God! The world needs more than ever ‘love, hope, values, unity and solidarity’ NOT these types of people.” 13 May 21
This Is Us is officially coming to an end with its upcoming season six, and…
Entertainment
0