“This happened already,” a voice whispers. “This smells familiar.”

We hear the voice near the start of “Maze,” a frustrating dance-theater work debuting at the Shed this week. The message is true in several senses.

The intended one is thematic. As the program note indicates, “Maze” takes on social issues like “the school-to-prison pipeline” and “systemic racism in the justice system.” Viewed historically, such topics can induce a bitter sense of déjà vu.

The familiar smell also arises, though, from the many similarities between this production and “Flexn,” a show that originated at the Park Avenue Armory in 2015. Much of the talented cast and creative team are the same, as are many of the powerful themes, but so is the central problem: all that talent floundering for want of direction.

As in “Flexn,” one of the directors here is Reggie Gray, also known as Regg Roc, a pioneer in the Brooklyn-born street-dance style called flexn and the founder of the D.R.E.A.M. Ring, a crew that serves as cast for both shows. Mr. Gray was one of the first to develop the form’s narrative potential — to show how its joint-testing contortions, otherworldly gliding in sneakers and stop-motion pantomime could express the extreme emotional pressures experienced by its dancers.

But what works in the context of a dance battle or a music video isn’t the same as what’s required for a 90-minute theatrical production. For “Flexn,” Mr. Gray shared the director’s chair with Peter Sellars, who pushed the dancers to go big without showing them how to grow. For “Maze,” he shares duties with the experimental theater artist Kaneza Schaal. And this new team seems to be trying to correct some of the flaws of “Flexn.” 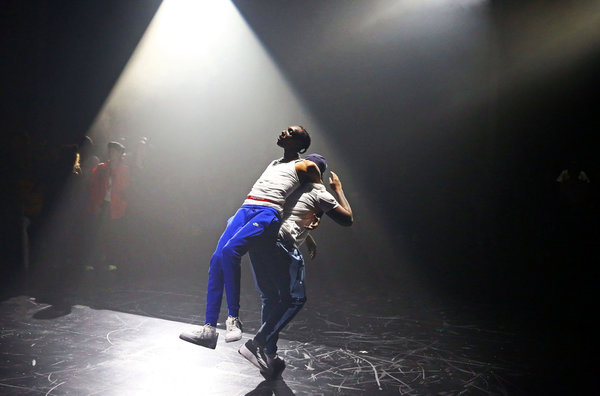 Where in “Flexn” the brilliance of the dancers was often lost in the vastness of the Armory, “Maze” begins with the 15 dancers close up, sharing the stage with the freely roaming audience in the Shed’s smaller Griffin Theater, an open space defined by Tobias G. Rylander’s lighting: pyramids and cones of illumination that outline crosses on the ground.

And where the music for “Flexn” was recorded (and oddly mawkish), this time the musical director, the D.J. Epic B, is joined by live musicians: the excellent singer-actors Justin Hicks and Kanita Miller Hicks; the djembe drummer Rasaan-Elijah Green; and, a bit incongruously, a trio of taiko drummers called Taiko Masala.

The immersive staging and the live music provide gains in immediacy. And some of the lyrics, by Eisa Davis, increase the theatrical sophistication. Yet throughout “Maze,” whether the audience is encircling the dancers or (as later) watching from stadium seating, the core problem of weak structure persists.

There are, of course, many astonishing flashes — not merely of attention-getting tricks with hats and double-jointedness, but of real artistry. Yet so many of the serial solos meander and sputter, improvisational in the unfinished sense. And the group sections aren’t much more coherent, individually or in sequence.

“This happened already,” the voice whispers again as we see a stage of standing dancers, their hands crossed as if in manacles, swaying as if on a slave ship. It’s a striking image, and a familiar one — overly familiar, despite the thematic point. Another group section, acting out and abstracting the shooting of Laquan McDonald by Chicago police, is equally striking, unfocused and underdeveloped. Assembly-line choreography effectively conjures prison life, but it’s the street-to-stage pipeline that needs more attention. Everything feels like a first draft.

And everything is in contrast to the aftershow, when dancers and even audience members freestyle. Suddenly, there’s real person-to-person interaction, real in-the-moment invention, real joy. The dancers are still in the Shed, but they’re free from the Maze.

Through Aug. 17 at the Shed; theshed.org. 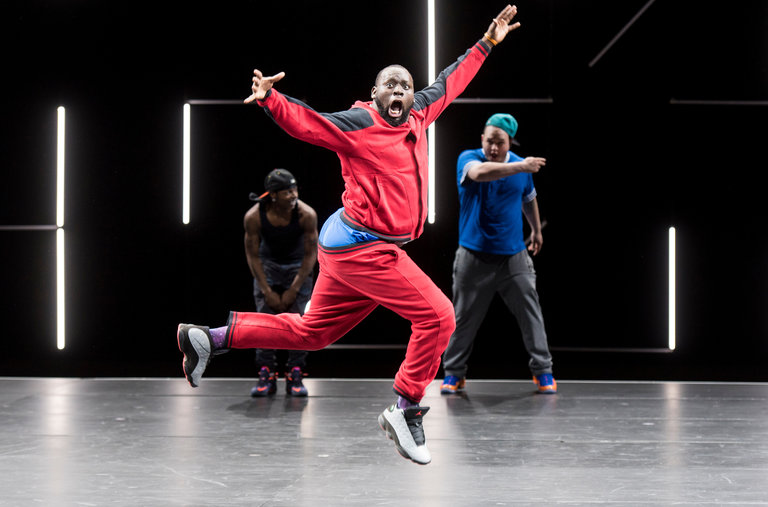 An earlier version of a picture caption with this article, using information provided by the Shed, misidentified two dancers. The partially hidden dancer is Glendon “Tyme” Charles, not Sean “Brixx” Douglas; the dancer on the right is Mr. Douglas, not Calvin Hunt. 3 Mar 22
After a long hiatus since the beginning of the pandemic, New York’s Outsider Art Fair…
Entertainment
0