'The Witches' Review: A New Take on the Roald Dahl Story Complete With Halloween-Ready 3D Visuals

The former Meghan Markle and Prince Harry were as open and candid as they’ve ever been in an appearance on the podcast “Teenager Therapy” to mark World Mental Health Day on Saturday.

Midway through the podcast, one of the hosts asked the Duchess of Sussex, “How are you?” The question harkened back to an emotional, pivotal moment for Meghan in October 2019, when ITV journalist Tom Bradby asked nearly the same question, and her honest answer garnered a global reaction.

“Not many people have asked if I’m OK, but it’s a very real thing to be going through behind the scenes,” the duchess said at the time.

“Any woman, especially when they’re pregnant, you’re really vulnerable, and so that was made really challenging. And then when you have a newborn, you know. And especially as a woman, it’s a lot,” she said, adding that she was also a newlywed.

Toward the end of the clip, Bradby asked if it would be fair to say that Meghan is “not really OK? As in, it’s really been a struggle?”

The answer prompted sympathy for and outrage over the treatment of the Duchess of Sussex and dominated social media and headlines around the globe.

In her podcast appearance Saturday, the duchess gave some background as to just how she was feeling on the tour and on that particular day.

“Isn’t that funny ― it was about a year ago that someone asked me that. We were on a tour in South Africa, and on the last day of the tour, man I was tired. I was just about to give Archie a bath. I was exhausted.”

Harry chimed in to add that Meghan was also breastfeeding Archie at the time, which the duchess said was “like running a marathon” for those who don’t understand how tiring it is.

“Between every official engagement, I was running back to make sure our son was fed,” the former “Suits” actor added, saying it “was a lot.”

“But at the end [of filming for a documentary], the journalist asked me if I was OK. And I didn’t realize that my answer would receive such an interest from around the word,” Meghan said.

“I didn’t think about that answer. I just answered honestly,” Meghan said. “Because I was in a moment of vulnerability, because I was tired, because there was no presentation. It was just ― here’s where I am ― I’m a mom who is with a 4 1/2-month-old baby, and we are tired.”

Meghan added, “But I think it speaks to the fact that the reason it resonated with people is because everyone wants to be asked if they’re OK.”

Now, “a year later, I would say, yes, I am doing well,” the duchess answered. 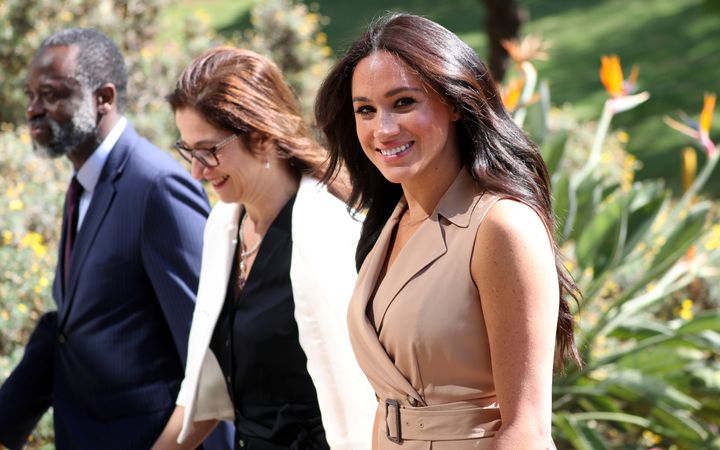 After the royals’ tour of South Africa in October 2019, Harry and Meghan took a six-week sabbatical in North America. Following their return to the U.K., the Duke and Duchess of Sussex announced that they were stepping back as working members of the royal family on Jan. 8.

Once they closed out their last round of royal duties in March, the couple moved to Los Angeles and later settled in Montecito, California, near Santa Barbara, where they continue to do both virtual and in-person engagements during the coronavirus pandemic.

Subscribe to HuffPost’s Watching the Royals newsletter for all things Windsor (and beyond).

Selena Gomez is ready to vote! The 28-year-old “Love You Like a Love Song” singer revealed that she received her...

When episode nine of the Star Wars saga was released in 2019, you were worried about how you'd get your...