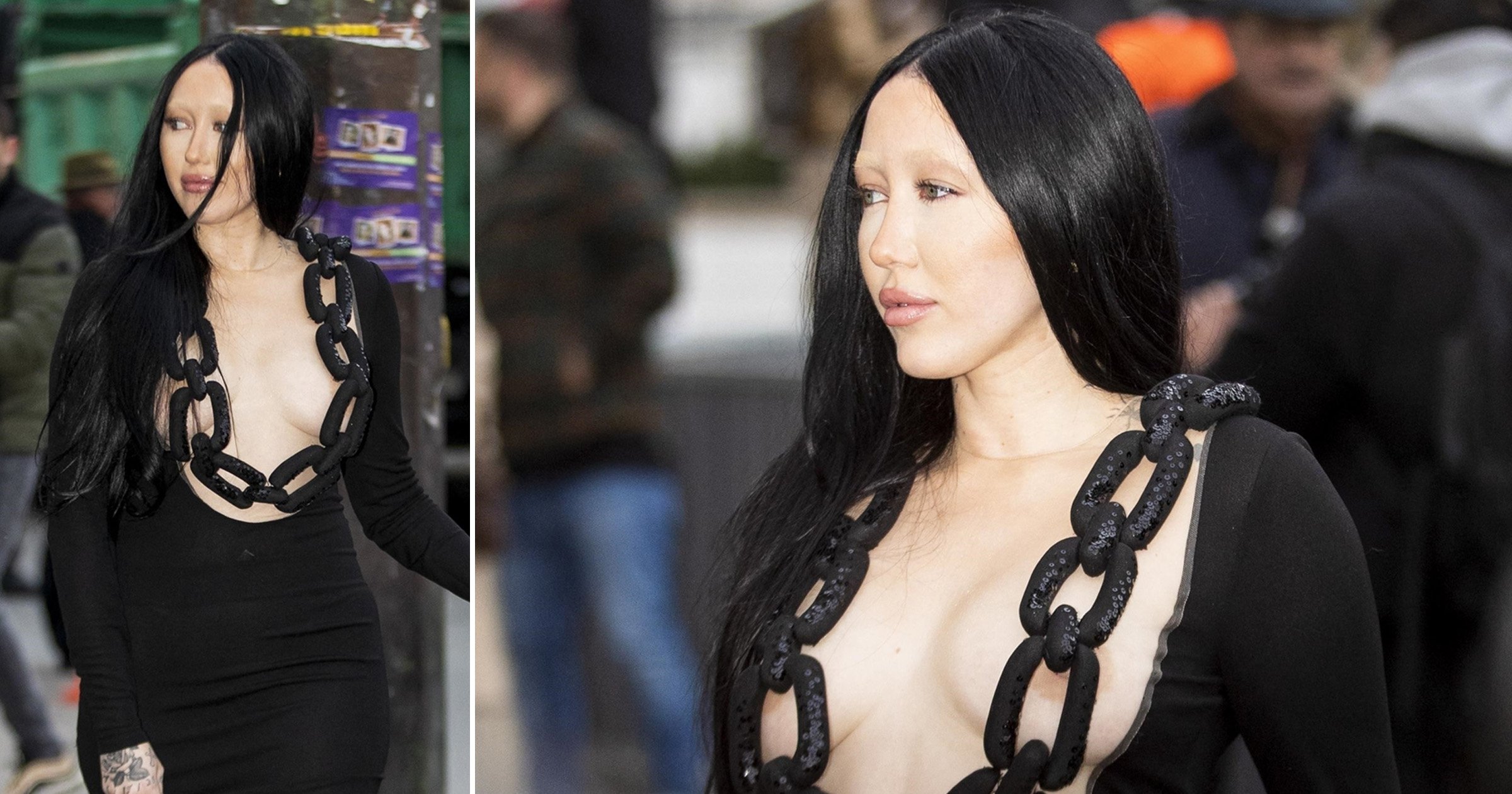 Noah Cyrus made a risky outfit choice in Paris as she donned a revealing gown for the city’s haute couture spring/summer 2023 fashion week on Tuesday.

The younger sister of singer Miley Cyrus turned heads as she stepped out in an interesting ensemble that featured a barely there plunging neckline.

Opting to go braless beneath the gothic black dress, the 23-year-old covered her assets with a chunky chain detail that was strategically placed across her chest.

Turning heads in the French capital, the musician appeared confident and poised as she showed off her outfit.

The daughter of Billy Ray and Tish Cyrus paired her dark look with sheer black tights and sky-high heels as she took inspiration from Morticia Addams and let her long poker-straight dark hair hang loose down her back.

Allowing her clothes to speak for themselves, Noah braved the January cold and went coat-less for the occasion.

One day earlier, the July chart-topper captured Parisians’ attention in another black number as she joined other celebrities at the Alexandre Vauthier haute couture SS 2023 runway extravaganza.

Noah donned a striking high-necked sheer black gown with a ruffled hem, underneath which she sported a delicately beaded bra and glittering underwear.

She added to the drama of the fashionable outfit by bleaching her eyebrows blonde.

The star grew up in the spotlight of her older sister and Disney Channel legend Miley and appeared on several episodes of the network’s hit show Hannah Montana, as a child.

Miley wasn’t the only talented offspring in the Cyrus household however as Noah also carved her own path in the music industry – and picked up awards for her efforts.

She was recently nominated for a Grammy award for the best new artist which was her first nomination from the prestigious ceremony.

Noah’s fashionable display was one of many celebrity moments at the European event as Kylie Jenner and Doja Cat also made headlines for their choices.

Donning a huge, realistic lion’s head that was attached to a slinky black dress, Kylie garnered attention for the wrong reasons earlier this week and was accused online of promoting ‘hunting’.

Doja was a lady in red and covered her entire body in paint and gem bubbles as she stepped out in support of the Schiaparelli showcase.

You can follow our new Snapchat show Pop Cultur’d, the go-to place for all things pop culture.

Keep up with the latest Showbiz exclusives by following Metro Showbiz on Snapchat.

And football fans can indulge in all the transfer gossip and more on Metro Football on Snapchat. 25 Dec 20
Between the coronavirus, George Floyd, and home schooling, 2020 was not good. So when I…
Entertainment
0