It seemed at first like a small, no-frills concert in a carefully controlled environment: The jazz musician Jon Batiste sitting at a piano in an auditorium at the Javits Center on Manhattan’s West Side, performing for an audience of about 50 health care workers seated in evenly spaced rows — some wearing scrubs, others Army fatigues.

The dancer Ayodele Casel began tapping, with no musical accompaniment except a recording of her own voice, her amplified cramp rolls filling the room. And the opera singer Anthony Roth Costanzo performed “Ave Maria” in a countertenor’s angelic tones. 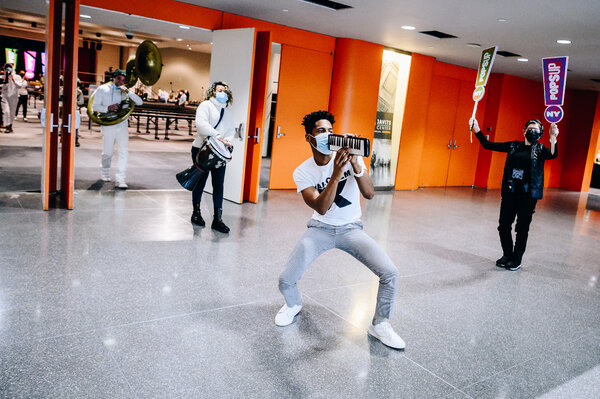 But about half an hour in, the performers stepped off the stage and exited the room, turning what had begun as a formal concert into a rollicking procession of music and dancing that grooved through the sterile building — the convention center was turned into a field hospital early in the pandemic and is now a mass vaccination site — where hundreds of hopeful people had come on Saturday afternoon to get their shots.

Batiste switched to the melodica, a toylike, hand-held reed instrument with a keyboard, and the troupe of musicians — which had expanded to include a horn section and percussionists — paraded up the escalator and through the convention center, eventually reaching a high-ceilinged room where dozens of people sat waiting quietly for the requisite 15 minutes after getting their vaccinations.

This concert-turned-roaming-party was the first in a series of “pop-up” shows in New York intended to give the arts a jolt by providing artists with paid work and audiences with opportunities to see live performance after nearly a year of darkened theaters and concert halls. Gov. Andrew M. Cuomo announced plans for the series, called “NY PopsUp,” last month, declaring that “we must bring arts and culture back to life,” and adding that their revival would be crucial to the economic revival of New York City. The shows are getting underway as he finds himself under fire for the state’s handling of Covid-19 deaths of nursing home residents.

Because the program is wary of drawing crowds, most of the performances will be unannounced, emerging suddenly at parks, museums, parking lots and street corners. The idea is to inject a dose of inspiration into the lives of New Yorkers — a moment in which they can pause their scheduled lives and witness art during a pandemic year that has limited human contact and imposed tight restrictions on people’s activities.

“We need more spontaneity; that’s what the beauty of this is,” Batiste said in an interview. “You don’t know what’s around the corner.”

As the troupe of musicians moved through the Javits Center, the audience of health care workers followed them, clapping to the beat and recording the spectacle on their phones. Batiste, who is the bandleader on “The Late Show With Stephen Colbert,” propelled his musicians through the space (most of them have played with the show’s house band, including Endea Owens on bass, Tivon Pennicott on saxophone, and Joe Saylor and Nêgah Santos on percussion).

Bre Williams, a 35-year-old nurse in blue scrubs who had come from Savannah, Ga., to help out in New York, looked on wide-eyed.

“Y’all do this stuff all the time up here?” she said, laughing.

Shortly before the music ended, some of the health care workers rushed off to continue their work day (this concert was happening during their break time, after all).

The series is put on by a public-private partnership led by the producers Scott Rudin and Jane Rosenthal, along with the New York State Council on the Arts and Empire State Development. Zack Winokur, the director and interdisciplinary artist in charge of the programming, said the group is aiming to put on more than 300 pop-up performances through Labor Day, in every borough and around the state. The performers are chosen by a council of artists — among them Batiste, Casel and Costanzo — who are each asked to tap into their own networks to find participants.

“It’s been a long time since I’ve seen a live performance,” Winokur said in an interview. “It’s a profoundly needed experience right now.”

After the first performance at the Javits Center, the musicians headed to Brooklyn, where they began another flash-mob-style street jam, starting from Cadman Plaza Park and winding their way through Dumbo to end up at a skatepark, where teenagers stared at them curiously before hopping back on their skateboards. The free, mobile concerts are called “love riots” by Batiste, who has previously planned them on social media. This one traveled along sidewalks and slushy snow, sometimes slowing traffic.

Prevented from tap dancing on the street, Casel banged out rhythms by clapping the metal plates on her tap shoes together with her hands; Costanzo danced along with the band and at one point grabbed the megaphone to sing “Somewhere Over the Rainbow.”

While the music was intended to provide a spontaneous display for passers-by, the march itself was as tightly regulated as any pandemic-era event. Security personnel directed members of the musical entourage around uneven terrain and dog waste. Another employee asked onlookers to spread out when they started to break social distancing guidelines.

Despite the logistics that went into it, the plan succeeded in being a spontaneous curiosity for the dozens of people who unexpectedly encountered the music. Moving down narrow alleyways and commercial streets, the band caused people to stop, stare and sometimes groove a little bit. Children peered through windows along Washington Street; a doorman darted out of an apartment building to see what all the noise was about; pharmacy employees leaned out of the doorway to film the procession down the sidewalk.

Not everyone seemed to appreciate the music, though. At one point, someone inside an apartment building began throwing objects at the marchers from several floors up (one of the security staffers said he thought he saw an orange juice container and a trophy hit the snow).

Accustomed to improvising, the band simply dodged the flying objects and marched a bit more quickly, the music never stopping.