Last Kingdom history: Was Kjartan based on a real person?

LONDON — Inua Ellams’s plays have been such an enlivening presence on the London stage in recent years that it comes as a particular treat to make contact with the man himself.

“An Evening With an Immigrant,” a solo play written and performed by Ellams, a London-based Nigerian author, allows us 90 minutes in his compassionate and impassioned company as he chronicles the distance he has traveled both physically and psychically from his native West Africa, first to England and then Ireland and back to England, gathering acclaim as a poet, performer and playwright along the way.

The production by Ellams — author of the much-traveled “Barber Shop Chronicles” as well as an insightful take on “Three Sisters,” with Chekhov’s play relocated to Nigeria during the country’s Biafran war — shares a stage with monologues from Alan Bennett and David Hare at the Bridge Theater here. And while those English dramatists represent a long-established senior generation, Ellams and other fast-rising Black artists, several of whom are included in the Bridge repertory season, point to invigorating theatrical prospects ahead.

One of four children born into a Muslim-Christian household — he has three sisters, aptly enough, given his interest in Chekhov’s play — Ellams identifies as “naturally nomadic” and describes a continuing quest “to find people to tell stories to.” (So it flows naturally that the key props in his show are a notepad and a suitcase.)

At some point, though, we all want to feel that we belong, and Ellams gains enormous emotional and politically incisive capital from the difficulties he faces as an immigrant wishing to be accepted by his adopted country.

One especially surreal passage in the play, staged at a reconfigured Bridge Theater for an extended run through Nov. 7, describes him accepting an invitation to Buckingham Palace after public recognition of his work, only to find himself without a proper ID and, he says, in danger of deportation. His applications for residency and then British citizenship have also cost thousands of pounds, and only that first effort has so far been successful. 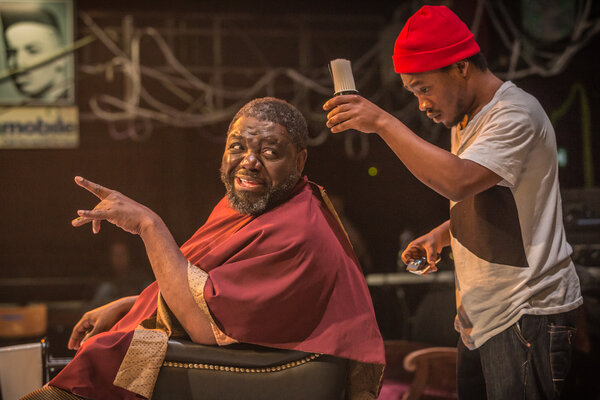 Ellams turned to poetry after his early thoughts of being a painter were scuppered, he tells us, because he couldn’t afford the paint. Having published his first book of poems at age 20 in 2005, he punctuates his story with some lushly evocative verse that is accompanied more often than not by a gently infectious laugh.

He also tears up here and there, as anyone might in frustration at the various humiliations that have beset him and his family as they try to become one with Britain, the country that young Inua first moved to at age 12. Highlighting displacement as one of the few commonplaces in the world just now, Ellams guides what often feels like a funky fireside chat toward an angrier place, informed at every turn by the plight of migrants around the globe. You exit the show incredibly happy that Ellams exists among British society, and more than ready to join in his fight.

Yolanda Mercy also has personality and charm in abundance, which is useful given that her contribution to the same season of monologues is pretty slight. Like Ellams’s piece, Mercy’s self-penned “Quarter Life Crisis” — which is running in repertory through Saturday — was first seen in 2017 and has now been granted a further platform at a premier theatrical address.

How nice it might have been if the entirely engaging Mercy had used the opportunity to go deeper with her tale of Alicia Adewale, a South Londoner of Nigerian origin who is hurtling somewhat uneasily toward the ripe young age of 26 — hence the quarter-life crisis that gives the 50-minute show its title.

As it is, the evening is sweet but doesn’t really take us anywhere new. As Alicia navigates dating apps and rejects pesky calls from her father, the lovelorn figure in a bathrobe at the show’s start feels like the latest in an array of similarly questing women like Bridget Jones. And given the sexually graphic remark or two peppered in “Quarter Life Crisis,” the erotically minded Fleabag, Phoebe Waller-Bridge’s stage and TV persona, would no doubt warm to a kindred spirit in Alicia, who charts her life in terms of chicken wings and vodka Red Bulls.

At a point of millennial limbo, Alicia resorts to — you guessed it! — Siri for reassurance and comes up short there, too. When she turns to her cellphone to ask whether she is grown up, Siri replies without hesitation, “I’d rather not say.”

A death in the family momentarily lowers a mood that for the most part is kept buoyant under Jade Lewis’s direction. Yet the current Bridge, with evident gaps where seats once were, doesn’t lend itself well to the breaking of the fourth wall that this performer returns to more than once, presumably to lend spontaneity to the event.

At a press performance, Mercy brought to his feet one spectator who, as luck might have it, was a psychotherapist able to lend Alicia support. (The two shared an air hug.) When she asked another audience member, “What makes you a grown-up?,” she was met with the reply “I’m very old.”

Those roped into conversation get a (sanitized) gift by way of thanks, which in context feels like a cop-out if the intention is to highlight the human need for connection. More surely could be done with a heritage rooted in the same Nigerian diaspora that Ellams embodies, but the scattershot feeling of Mercy’s piece works against a cumulative impact.

At the same time, it’s nearly impossible not to share Alicia’s insistence on hope while she lobs various questions across the footlights. “Who knows what tomorrow will bring?” she asks, posing an existential concern to which not even Siri can hazard a reply.

The Bridge season of monologues continues through Nov. 7. bridgetheatre.co.uk

Get the best celeb exclusives and video house tours to your inbox every evening with our daily newsletter Frankie Bridge...