Rachel Lindsay opened up about her time as part of Bachelor Nation, revealing in a new article some moments on set that were deliberately cut out to create a more compelling narrative for her to become the first Black “Bachelorette.”

The Texas lawyer, who appeared on both “The Bachelor” and “The Bachelorette,” opened up to Vulture about cutting ties with the franchise in the wake of several scandals pertaining to race, most notably with host Chris Harrison stepping down from his role after he came to the defense of a contestant accused of racism.

She explained the role she knew she had to play on a franchise composed primarily of white people.

“I couldn’t be like the Bachelorettes who had come before — somebody who was still living at home with her parents, who had ‘pageant queen’ on her résumé,” she said. “I was a lawyer. My father was a federal judge. I had a squeaky-clean record. I had to be a good Black girl, an exceptional Black girl. I had to be someone the viewer could accept. And I was a token until I made sure I wasn’t.”

The 36-year-old expressed that she was taught at “a very young age to speak up about injustices.”

“It was no different with Bachelor Nation. And I don’t think they ever saw it coming,” she said of her experience.

Lindsay was also candid about how she felt that viewers of her season were robbed of seeing her get a happy ending ― because of how runner-up Peter Kraus was portrayed in comparison to Bryan Abasolo, whom she ultimately chose and married in 2019. She also said it was “extremely upsetting” to her that producers told her she “had to ration the Black men” during her season as “Bachelorette” because they didn’t bring in enough men of color and wanted to keep the appearance of diversity. 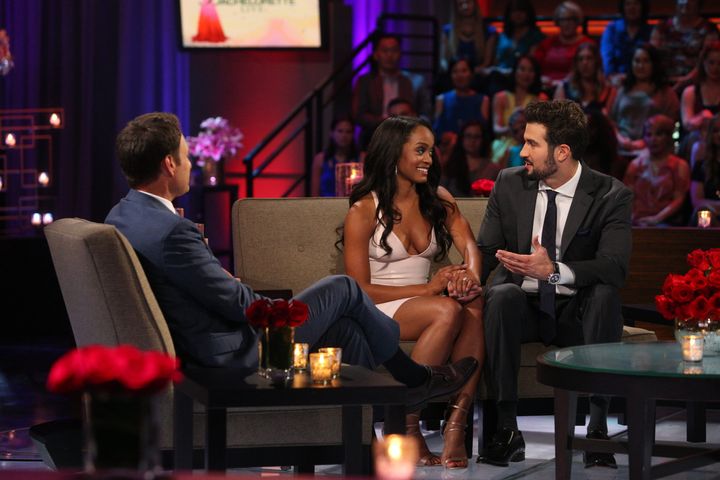 In one part of the interview, Lindsay revealed how the producers cut footage during her appearance on Nick Viall’s season of “The Bachelor” to set her up to become “The Bachelorette.”

She unpacked a moment with Vanessa Grimaldi, whom Viall would eventually select as the winner, where the two were forced to talk about their differences. As per Lindsay, Grimaldi didn’t make friends in the house as well as she did because Grimaldi liked Viall “so much she couldn’t hear about how he kissed another woman.”

When the two women sat down and talked it out, Grimaldi accused Lindsay of bullying her. Lindsay emphasized she knew immediately that “my Blackness was on display.”

“I knew the audience was going to look at me as an angry Black female,” she said, before describing a scene where Grimaldi claimed that Lindsay had ostracized her.

“I never raised my voice because I was aware of what was going on. When she started getting emotional, I knew, This is going to be bad. She’s crying; I’m not. I’m going to look cold. We did not come to any type of agreement,” she said.

In the aftermath of that discussion, Lindsay said she told producers: “You do not understand what it is to be a Black woman in this house full of white folks and for a white woman to cry in your face and call you a bully.”

The moment ultimately never made it to air, which Lindsay says was just one time when producers protected her.

“Another time, I’d had two mixed drinks, and I was out-of-my-mind wasted. Astrid was holding my hair back in the bathroom. (I drunkenly told her, ‘You are my only real friend.’) They could have brought cameras in there. They didn’t,” she said. “I sat in the ceremony that day as Nick gave out roses, my head resting on Astrid’s shoulder. My hair was disheveled. I wasn’t always like that, but all it takes is one mess-up. They could have taken those clips and depicted me as a wild Jezebel. They didn’t because I would never come out on top,” she explained.

Many fans of the franchise and Lindsay specifically have shared their support for her frankness in the interview on social media, emphasizing that they “stand” with her: