PITTSFIELD, Mass. — You have to give points for chutzpah to a musical that imagines Little Richard and J. Edgar Hoover as adversaries in a celestial courtroom.

The fabled singer of “Tutti Frutti” and “Good Golly, Miss Molly” — portrayed with shiny self-delight and lip gloss to match by Richard Crandle — serves as defense counsel for the title character of “Rock and Roll Man: The Alan Freed Story,” which opened on Saturday at the Colonial Theater here.

Hoover, the infamous longtime head of the F.B.I., is the prosecuting attorney, naturally, and is played as a monolith of sternness (and minimal expressiveness) by George Wendt (of “Cheers” immortality).

This ill-matched pair shows up to do battle over the fate of Freed (Alan Campbell), the influential disc jockey credited with giving rock ’n’ roll its name, in a nightmare-generated forum called the Court of Public Opinion. A sequin-robed eminence known as Judge Mental (Brian Mathis) presides.

Sounds like a hoot, right? I’ll admit my hopes were raised when this fantasy courtroom first materialized, amid tantalizing Expressionist distortions, courtesy of Tim Mackabee (sets) and Matthew Richards (lighting). Just imagine the crazy secrets that might come tumbling out if either of these antithetical men even scratched the other’s surface.

No such luck with this Berkshire Theater Group production, which features a by-the-numbers book by Gary Kupper, Larry Marshak and Rose Caiola, with original songs by Mr. Kupper. After all, this is a jukebox musical, and the evidence presented to the jury (us, the audience) takes the form of snippets of dozens of pop hits that Freed introduced to mainstream audiences.

Since those songs include pioneering works that have aged into golden oldies now tattooed upon the national memory — and since the audience is encouraged to clap along as they are performed, you can probably predict what the verdict will be. Hoover doesn’t stand a chance.

That’s especially true once you realize that these numbers will be presented with a consistent, easy-listening affability that makes you wonder how such music could ever have been considered dangerous. And as played with choir boy sweetness by Mr. Campbell, Freed — who was convicted of accepting payola toward the end of his meteoric career — registers throughout as definitely more sinned against than sinning.

Conveying the sweaty, sexy excitement of early rock, and its transgressive blurring of racial lines, has always been a problem for Broadway-style musicals, whether the source material is Leiber and Stoller (“Smokey Joe’s Café,” on Broadway in 1995), Elvis (“All Shook Up,” 2005) or a John Waters movie (“Cry-Baby,” 2008). Rough edges and quirky personalities tend to be sanded down to the same monotonous smoothness.

The performers being impersonated in “Rock and Roll Man,” which is directed by Randal Myler and choreographed by Brian Reeder, include Chuck Berry and Screamin’ Jay Hawkins (both embodied by Matthew S. Morgan), Buddy Holly (John Dewey), Jerry Lee Lewis (James Scheider), Frankie Lymon (William Louis Bailey) and LaVern Baker (Valisia Lekae). Also in residence is a very harmonious quartet, made up of Early Clover, A.J. Davis, Jerome Jackson and Eric B. Turner.

They’re perfectly genial company, of the type you might encounter in a theme park pavilion. But only Ms. Lekae and Mr. Crandle start to convey the disruptive electricity of these recording stars. When you’re told that Freed’s oversold concerts led to riots — and were really and truly banned in Boston — you may feel like scratching your head. 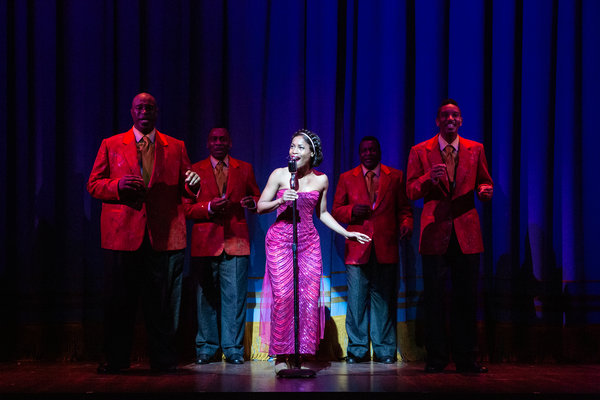 There’s no denying the immense cultural influence of Freed, who died at 43 in 1965 and was one of the original inductees into the Rock & Roll Hall of Fame. He was a clean-cut, ostensibly easygoing fellow who might have passed for an insurance agent or a knowing father from a 1950s sitcom.

That such a white-bread guy should have felt a bone-deep affinity for what was perceived as subversive music, and facilitated its transition into the mainstream, is a paradox worth pondering. Earlier representations of Freed in movies (“American Hot Wax,” 1978) and television (“Mr. Rock ’n’ Roll: The Alan Freed Story,” 1999) failed, however, to make him a compelling figure.

Mr. Campbell, a Tony nominee as Joe the gigolo screenwriter in the original Broadway production of “Sunset Boulevard,” doesn’t add much to the portrait. He sings angelically (including original, hazy songs in the ’50s vernacular by Mr. Kupper), smiles seraphically and projects inner conflict by furtively swigging from a flask.

If only Freed’s inner demons had occasionally been let out to play. If only his perky teenage fans were shown acting in ways that really might have frightened their parents. Alas, such messy behavior is rarely acceptable in the land of the jukebox musical, where rules are as rigidly obeyed as they were in the Eisenhower era.

Ben Brantley has been the co-chief theater critic since 1996, filing reviews regularly from London as well as New York. Before joining The Times in 1993, he was a staff writer for the New Yorker and Vanity Fair.