WILLIAMSTOWN, Mass. — A black man in a cage is a potent and horrible symbol. But in Jonathan Payne’s “A Human Being, of a Sort,” it is also more than that. It’s history.

In 1906, Ota Benga, a 23-year-old man of the Mbuti people in what was then the Congo Free State, was put on display at the Bronx Zoo as an example of “the African pygmy.” The New York Times, not especially perturbed at the time, described him in a news article as “one of a race that scientists do not rate high in the human scale.”

A separate editorial stated that “it is absurd to make moan over the imagined humiliation and degradation he is suffering” — this even though he shared his cage, in the Primate House, with an orangutan and a parrot.

The animals are not depicted in Mr. Payne’s play, which finishes a brief run at the Williamstown Theater Festival’s Nikos Stage on Sunday. But Benga, in the person of Antonio Michael Woodard, is brought to vivid if ultimately unknowable life in a story that sends out long ripples.

I felt some of those ripples at two other productions I saw while in the Berkshires this week: Williamstown’s revival of “A Raisin in the Sun” and, oddly enough, Barrington Stage Company’s “Into the Woods.” Perhaps merely by proximity, or perhaps because of the moment we’re in, they all seemed to be involved in the same conversation.

In “A Human Being,” the conversation is enhanced by a blending of historical and fictional elements. Benga’s captor, a white adventurer named Samuel Phillips Verner, is based on a real figure, and so is the zoo’s director, William Temple Hornaday. It’s not clear why Verner (Matthew Saldivar) turned Benga over to the zoo, but Hornaday (Frank Wood, creepy and intense) justified his own actions as a matter of enlightened science.

Also true is the backlash from the black religious community, represented here by three ministers who argue with Hornaday over the morality — and symbolism — of displaying Benga as a creature to be gawked at and ridiculed. The ministers want to transfer him to an orphanage they run.

These historical elements of the production, a world premiere directed by Whitney White, are not yet cohering. But Mr. Payne’s main fictional gambit pays off. The invented character of Fred Engelholm, known as Smokey, is a black man nearing the end of a sentence for a petty crime — stealing two apples — that under Jim Crow in Tennessee led to three years on a prison farm and a chain gang. When Hornaday hires Smokey (the formidable André Braugher) as Benga’s keeper, it feels as if the theme of black male incarceration, literal and figurative, has suddenly grown a new dimension.

The relationship between Smokey and Benga — at first adversarial but gradually turning warmer as they recognize comparable suffering in their lives — is the emotional heart of the play. Mr. Braugher is instantly convincing as a man whose apparently easygoing nature is at least partly a front for anxiety: If he loses his job he’ll be sent back to prison. And yet as he contemplates the wider implications of Benga’s treatment, he cannot make peace with the situation. The result is no less painful for being foreseeable.

And Mr. Woodard is extraordinary. In his performance, what could have come across as an exploitation comparable to Hornaday’s is instead rounded into the full dignity and mystery of humanity. Mr. Payne — the author of “The Revolving Cycles Truly and Steadily Roll’d,” presented Off Broadway last year — smartly avoids noble or “savage” clichés but loads the character with traits and back stories that eventually coalesce into character.

And yet I was acutely aware that Benga, however much he is based on a real man, is also a theatrical construct. He weeps over the loss of his family in Africa, but also clowns for and hisses at the tourists watching him. Theatricality can be another kind of imprisonment: the packaging of tragedy — however delicately, in Ms. White’s staging — as entertainment. 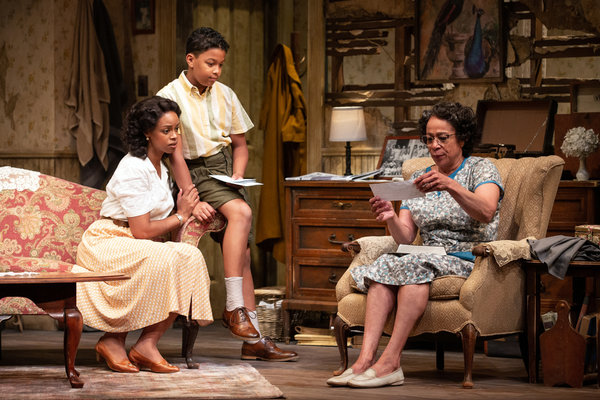 At Williamstown’s main stage, in the same complex, “A Raisin in the Sun” (through July 13) has been pointing at the same theatrical paradox more directly. As my colleague Ben Brantley noted in reviewing the revival, its director, Robert O’Hara, has made several blunt interpolations in the 60-year-old play. I agree that some seem to rip the neat hems of Lorraine Hansberry’s dramaturgy, extending the story both backward (through flashbacks to the Younger family’s late paterfamilias) and forward (to the future of their young son, Travis.)

The interpolations are shocking; I overheard one husband informing his wife afterward that the final gesture in particular was “totally unnecessary” and “overkill.”

Maybe so, but for me they were fully congruent with Mr. O’Hara’s aim of awakening a play whose prescience has, over time, become congealed under a layer of sentimentality. His version, which I found mostly electrifying, pulls at the thread of black men in crisis both to elucidate the play itself and to explain how we got where we are in real life. Travis, around 10 years old at the time of the play’s early 1950s setting, may have survived to our time, but what about his son?

It’s a stretch — and not just the 20 miles from Williamstown to Pittsfield, Mass., where Barrington Stage’s “Into the Woods” plays through July 13 — to find related themes in a work based on fairy tales. And yet the widely produced 1987 musical by Stephen Sondheim and James Lapine is fundamentally about curses. There’s the kind that witches put on neighbors who steal from their gardens, but also the kind that parents put on children by too much care or carelessness.

Usually it’s that angle — the price young people pay for their elders’ sins — that comes through loudest in this almost indestructible show. But as directed here by Joe Calarco, in a beautifully sung if indifferently staged production, the most salient trap is that of the parents themselves, who in their desire to have and keep their children will do almost anything.

When the Witch is played by a black man, as she is here by the blistering Mykal Kilgore, that theme takes on added resonance. Or at least it did for me after seeing “A Human Being, of a Sort” and “A Raisin in the Sun.”

“Don’t you know what’s out there in the world?” the Witch sings in a warning to her daughter, Rapunzel, whom she tries to keep in a castle. It doesn’t take a play to tell you that incarceration, whether literal or metaphorical, is a tragedy that mostly creates more tragedy.

A Human Being, of a Sort

A Raisin in the Sun

Jesse Green is the co-chief theater critic. Before joining The Times in 2017, he was the theater critic for New York magazine and a contributing editor. He is the author of a novel, “O Beautiful,” and a memoir, “The Velveteen Father.” @JesseKGreen • Facebook 30 Jul 21
Love & Basketball In our humble opinion, sexy movies should have their own genre, just…
Entertainment
0

20 Mar 20
John Legend may be known for his romantic love songs, but his new single proves…
Entertainment
0