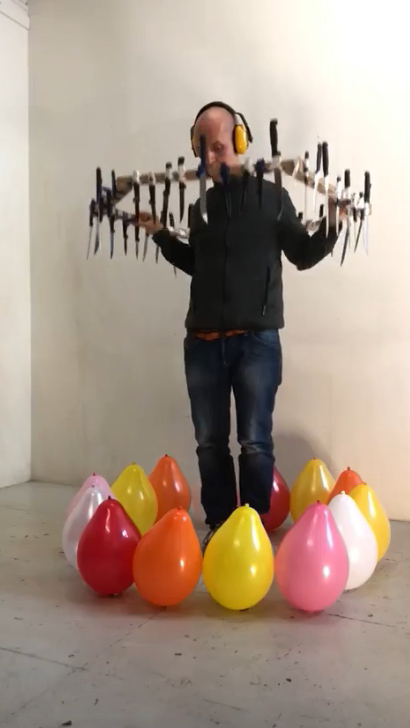 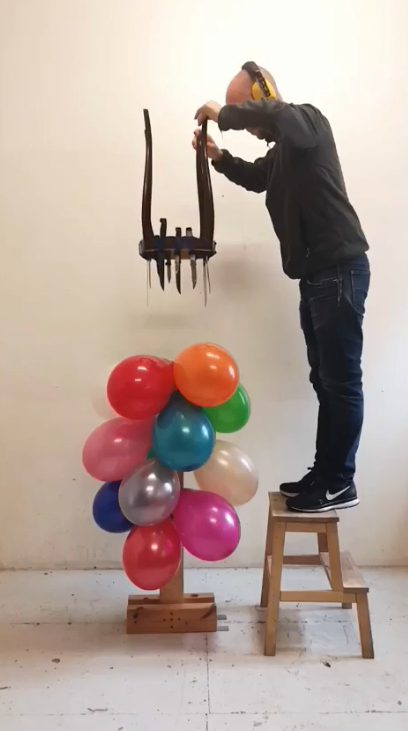 If art is creation, destruction should be its opposite. And yet, destruction has a long history in contemporary art, from Ai Weiwei infamously smashing a 2,000-year-old Han Dynasty urn to Gustav Metzger’s acid paintings.

Now, there’s this guy who pops a bunch of balloons with a bunch of knives.

Jan Hakon Erichsen, 41, is an Oslo-based artist who specializes in videos of himself fucking up a bunch of balloons. Usually it’s with knives, but sometimes he uses axes, cacti, or other objects to pop them.

Erichsen’s art became a viral sensation after he tweeted a compilation of the balloon videos he makes and shares on Instagram on Sunday.

“I have a good following [on Instagram], and I’ve been posting a few on Twitter as well. Then I posted that compilation video on Twitter yesterday, and that kind of for some reason just went viral,” he told BuzzFeed News.

Erichsen started making the videos about a year and a half ago, he said.

“I had just finished a longer project that was just totally time consuming, and I just wanted to make something that was fun,” he said.

At the time, he only had about 100 followers. Fast-forward to today, he has more than 300,000 Instagram followers and tons of new fans from the hugely viral tweet.

“I just wanted to show my friends on Instagram,” Erichsen said of why he first started posting the videos.

Perhaps not so surprisingly, Erichsen found many of his early fans in a rather niche community: balloon fetishists, aka “looners.”

He swears up and down his art is Not A Sex Thing — or, it’s not intended to be, at least.

“When I started this, I didn’t know that was a thing at all,” he said. “There were a lot of these looners, I think they call themselves, who contacted me to bring me into their group. They tried to get me to join their groups, but I just didn’t answer their DMs.”

Still, he doesn’t mind if the looner community finds his videos sexy.

It makes no sense, but somehow, seeing a bunch of balloons get popped with a bunch of knives can be oddly soothing.

“A lot of people started telling me my videos are ASMR, and I didn’t even know what that was, but now that I do I try to play up that sometimes,” he said.

Erichsen said he’d seen the cannon, and might take it as inspiration for an upcoming balloon video.

“I wouldn’t be surprised if I suddenly find something to do with a tube after that video,” he said. “I saw the video yesterday and I thought okay, I gotta do something with that. It will probably happen.”

The art world can be an exclusionary place, but Erichsen hopes you just have a nice time watching him wreck some balloons.

“It’s just kind of a bit of absurd art — there’s not some kind of a big message,” he said. “For me, it’s a freeing experience, to make these and not think about whether it should be something really important or have a huge message or anything like that. That can be kind of limiting, I think.”

“For people that are into performance art, they see this as art, and for others it’s just entertaining,” he said. “I don’t want it to be alienating — if they just see it as a viral video, that’s fine by me, it doesn’t have to be too complicated.”

Meghan Markle faces heightened criticism as royal couple prepares to step away from royal duties Royal commentators differ about what...