There’s a contradiction built into the phrase “true crime”: Most of that booming genre’s most popular works depend, for their effect, on the unknowability of the truth. It may be strongly suspected or widely assumed, but its elusiveness makes possible the combination of investigation and outrage that draws us in. If you want a satisfying resolution, you’re better off watching crime fiction.

Fans of the genre’s higher end — where time, budget and attention to detail produce something better than reality-television filler — are currently in luck. HBO has dedicated three weeks of its documentary schedule to a trio of two-part crime stories, “I Love You, Now Die,” “Behind Closed Doors” and “Who Killed Garrett Phillips?” (The first two are on HBO Go and HBO Now, having already aired on cable; the third airs Tuesday and Wednesday). Though none are at the level of “The Jinx” or “Mind of a Murderer,” all are solid and absorbing.

And just over the horizon, beginning Aug. 1 on Sundance TV, is “No One Said a Thing,” a six-part immersion in rural Missouri and the notorious 1981 vigilante killing of Ken Rex McElroy.

Each of the four hinges on a mystery, but the questions vary widely. “Behind Closed Doors,” about the 2008 murders of a teenage girl and a domestic in an apartment near Delhi, and “Who Killed Garrett Phillips?,” about the 2011 killing of a young boy in his upstate New York home, are classic locked-room stories and straight-ahead whodunits. In each case, suspects — the girl’s parents, the boy’s mother’s former boyfriend — were indicted and brought to trial under intense media scrutiny, but both cases remain unsolved.

In “I Love You, Now Die,” about the 2014 suicide of the Massachusetts teenager Conrad Roy III, the mystery hides in plain sight, among the thousands of text messages exchanged by Roy and his girlfriend, Michelle Carter, who is in prison for involuntary manslaughter. Why, when Roy got out of the truck in which he was killing himself with carbon monoxide, did she encourage him to get back in? 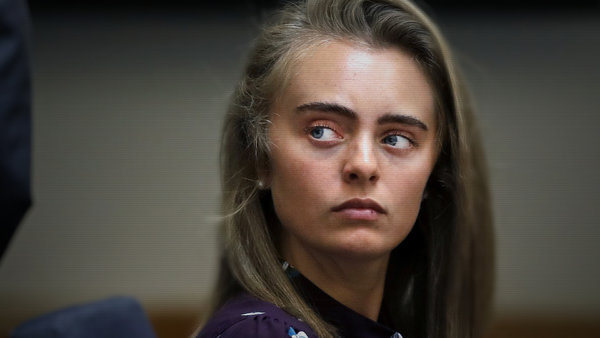 And in “No One Said a Thing,” the questions come from every direction. No one has ever been charged in the killing of McElroy, the town bully of Skidmore, Mo., even though he was shot in front of a crowd of townspeople in broad daylight. Was the killer the man named at the time by McElroy’s wife and identified in the documentary? How was the code of silence enforced all these years? Is Skidmore, the scene of a string of luridly violent crimes since the McElroy killing, crippled by that legacy? Most uncomfortably, was the vigilante justice justified?

The documentaries all employ the standard narrative strategies and visual language of true crime — watch them all, and you’ll have spent a lot of time slowly and ominously scanning the landscapes of far northern New York state and northwestern Missouri and the crowded streets of Noida, India. But each story calls for its own particular tactics. Erin Lee Carr, the director of “I Love You, Now Die,” dramatizes the texts at the center of the case, filling the screen with them and giving them sound and color effects. Carter is seen mostly sitting silently in courtrooms, and the film is devoted largely to providing context for her text messages as a way of trying to get inside her head.

“Behind Closed Doors,” made by P.A. Carter for HBO Asia, has plenty of news footage to choose from — one of its themes is the calamitous effect all the suffocating coverage by Indian television and magazines has on the case. But what happened inside the apartment of the Talwar family on the night of the murders remains a profound mystery, and Carter responds by going all in on speculative re-enactments — the credits require two full screens to name all the actors employed. By contrast, in “Garrett Phillips,” the Oscar-winning director Liz Garbus plays it straight, leaning on recorded telephone traffic and lengthy video excerpts from questionable interrogations.

“No One Saw a Thing” is a production of Blumhouse, a company better known for the “Paranormal Activity” and “Purge” films than for its television documentaries. Directed by the Israeli filmmaker Avi Belkin, the series leans into the dark-side-of-small-town-America conventions that the McElroy case summons up — a recreation of the murder scene, involving a slumped body and a windshield fouled with blood, is revisited constantly and filmed from every angle. Unidentifiable faces shot in extreme close-up, presumably those of Skidmore residents, are also used as an eerily symbolic recurring motif.

Beyond the luridness, though, the primary impression left by “No One Saw a Thing” (five of the six episodes were available for review) is of a town stuck in time, reliving the trauma that put it on the map and that may be the main thing keeping it alive. The aging lawyers, cops and townspeople interviewed in the series are also seen in their younger days, talking to local and national news programs and, several times, to “60 Minutes.” The truth of McElroy’s killing may never be officially recognized, but the truth of true crime is neatly summed up by the Skidmore resident who interrupts an interview to enthusiastically tell a neighbor, “I got new people to talk to!”

I Love You, Now Die

No One Saw a Thing

Mike Hale is a television critic. He also writes about online video, film and media. He came to The Times in 1995 and worked as an editor in Sports, Arts & Leisure and Weekend Arts before becoming a critic in 2009. @mikehalenyt • Facebook