Vivian Perlis, a musicologist who founded Yale University’s Oral History of American Music, an invaluable archive of audio and video interviews that she directed for more than 40 years, died on Thursday at her home in Weston, Conn. She was 91.

Her family announced the death.

The oral history project includes some 3,000 recordings of interviews with composers and other major musical figures, from Aaron Copland to Elliott Carter, from Duke Ellington to John Adams. The eminent musicologist H. Wiley Hitchcock described it as an “incomparable resource.”

Ms. Perlis came to run the project accidentally, after taking a job as a research librarian at the Yale School of Music in 1967. She had become involved there with the library’s extensive Charles Ives collection, and one day she made a visit to New York City to pick up some additional materials donated by Julian Myrick, who had been a partner with Ives in an insurance business.

Thinking that he might have some recollections to share, Ms. Perlis brought along a portable tape recorder. She was fascinated by the stories that Mr. Myrick, an elderly, hard-of-hearing former Southerner, told about the iconoclastic, curmudgeonly Ives.

This led her to conduct a series of more than 60 interviews over several years with people who had known and worked with Ives. A nephew in Danbury, Conn., Ives’s hometown, recounted playing baseball with “Uncle Charlie.” The composer Lehman Engel recalled hearing Ives talk about the “old days,” when the “sissies,” meaning timidly conservative performers, refused to play Ives’s flinty music.

At the time, Ms. Perlis faced disdain from traditional musicologists who thought recorded interviews would be merely anecdotal, overly subjective and prone to factual inconsistencies. There were “sneers about anything that wasn’t hard-line research,” Mr. Hitchcock said in an interview with The New York Times in 1997. 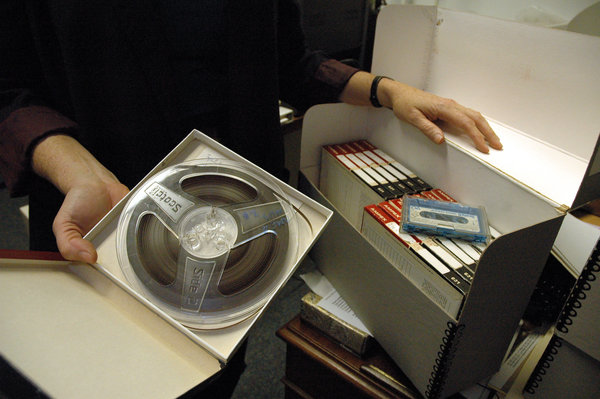 The “establishment types” in his field, he added, “considered it pipsqueak stuff.”

Ms. Perlis’s persistence paid off. In 1974, for the Ives centenary, selections from these interviews — edited and arranged by her — were published by Yale University Press as “Charles Ives Remembered: An Oral History.” The next year the book won the Otto Kinkeldey Award, the highest honor of the American Musicological Society, named after its first president.

Two subsequent books, which Ms. Perlis wrote with Copland, had more mixed receptions. “Copland: 1900 Through 1942” and “Copland Since 1943,” both published in the mid-1980s, include long excerpts from Ms. Perlis’s comprehensive interviews with the composer, explanatory passages by Ms. Perlis and insightful comments from many Copland friends and associates, among them Ned Rorem, Leonard Bernstein and Agnes de Mille. But the portrait of Copland’s life is veiled. There is no mention of his homosexuality.

“Most composers are part of a neglected minority and are very grateful to have the opportunity to speak,” she told The Times in 2005. “They don’t have another chance to answer critics and say what they think and feel.”

Vivian Goldberger was born in Brooklyn on April 26, 1928, to Charles and Frances (Platzer) Goldberger. Her father, an entrepreneur, started the Applicator Brush Company, building it around his own inventions. Her mother helped with the business and raised the couple’s three children.

Vivian attended the University of Michigan, studying harp and piano, and earned a master’s degree in music history there. She moved to New Haven with her husband, Dr. Sanford J. Perlis, whom she married in 1948 and who became a professor of psychiatry at the Yale School of Medicine.

Ms. Perlis began doctoral studies in musicology at Columbia University in the early 1960s, only to meet dismaying resistance.

“I had three small children at home in Connecticut and was taking the train down to 125th Street for my classes at Columbia,” she said in the 1997 interview. “When I asked for some flexibility regarding the requirement to study full time, I was turned down flat. So I could either orphan my children or give up the Ph.D. That would never happen today.”

She became a harpist with the New Haven Symphony while working the library job at Yale that led to her founding the oral history project.

For years Ms. Perlis essentially had to secure financing for the project on her own. The Yale School of Music provided office space and work-study students to assist with the endless task of transcribing interviews. But she often felt “like an orphan,” she said, as she labored in her basement headquarters.

Things changed in the late 1990s, when the main library at Yale joined the school to sponsor the project, ensuring steadier support along with a larger, climate-controlled space.

From the start Ms. Perlis buttressed the collection with existing recorded interviews acquired from radio stations and historians, building it into one of the most extensive oral history archives in America. Her hunches about young composers who might become important proved savvy: For example, she recorded an interview with John Adams when he was in his 20s, years before his opera “Nixon in China” brought him to international attention.

In 2005, working with the project’s associate director at the time, the oboist and author Libby Van Cleve, Ms. Perlis wrote “Composers’ Voices From Ives to Ellington,” an acclaimed book that came with two CDs. (Ms. Van Cleve became the project’s director on Ms. Perlis’s retirement in 2010.)

Ms. Perlis is survived by a daughter, Lauren Perlis Ambler; two sons, Michael and Jonathan; a brother, Irwin Goldberger; and five grandchildren. Her husband died in 1994.

Over the years, as video become more central to the Oral History of American Music, Ms. Perlis continued to favor audio interviews. She felt they were more direct and personal.

“The whole point of this resource,” she said, “is to give you a sense of the person, the sound of the voice, the attitude that comes through.” 27 Apr 21
Questlove and Searchlight Pictures have shared a teaser for the documentary, Summer of Soul (…Or,…
Entertainment
0