Thus far, “WandaVision” has done a good job of pointing the finger at Wanda (Elizabeth Olsen) for being the show’s big bad.

After all, she’s supposedly the one who’s entrapping everyone in the alternate reality of Westview. And a new clip from Episode 7 appears to confirm she has some control over the made-up sitcom world:

But “WandaVision” is largely about magic. And a big part of any magic trick is misdirection ― or perhaps in this case … musical direction?

In an interview with Nerdist earlier this month, “WandaVision” composer Christophe Beck talked about creating music that can span the timelines for the series, which includes everything from old-timey sitcoms to modern-day Marvel. He had a big advantage in knowing where the show was going, so he could use musical themes “in various ways.”

“I’m gonna keep it vague,” Beck said. “But let me just say that there are themes for certain characters that are introduced in the style of the sitcom — in the first episode even — that come back in full-blown MCU glory, either as a heroic theme for our protagonist or a villain theme for our antagonist.”

The composer went on to say that while music in an early sitcom intro would obviously be different from a big Marvel sequence later, “viewers that are really paying attention, they will be rewarded.”

It’s an interesting quote ― especially that bit about the “antagonist.” And now it’s time to read way, way, way too much into it.

The first black-and-white episode of “WandaVision” was an homage to “The Dick Van Dyke Show” and featured Wanda putting on a last-minute dinner for Vision’s (Paul Bettany’s) boss.

If the antagonist for the show was revealed with a music cue in the first episode, there aren’t a lot of options. It’s probably not Vision’s boss, Mr. Hart (Fred Melamed), or his wife, Mrs. Hart (Debra Jo Rupp), since they’re not shown much in later episodes. So, Wanda and Vision are clear candidates (perhaps the former more than the latter).

But remember, the premiere also featured the arrival of another big character ― the nosiest neighbor of all, Agnes (Kathryn Hahn). And interestingly, her first appearance is accompanied with a brief but noticeable musical punctuation as she knocks on the door.

Was this the Marvel show’s villain being (musically) noted? 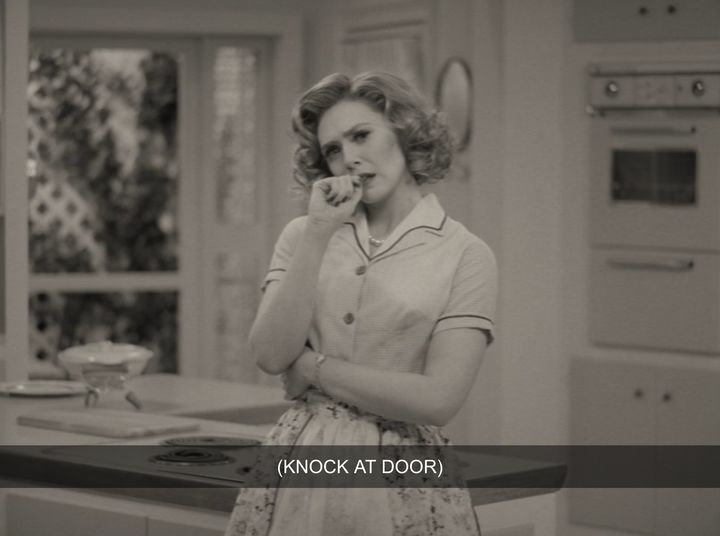 Agnes has long been theorized to secretly be the character Agatha Harkness, a powerful witch and sometimes antagonist from the Marvel comics.

There are already a lot of clues this is the case, including an interesting necklace and Harkness’ role in the comic storyline involving Wanda’s twin boys (who are obviously in the show).

But is she also the villain? Well, maybe.

In Episode 6, the “WandaVision Spooktacular,” Vision briefly awakens Agnes (who is dressed as a witch at the time) from her apparent trance, and she claims Wanda is the one trapping everyone in Westview. But when Vision awakened Norm (Abilash Tandon) in Episode 5, he only vaguely complained, “She’s in my head.”

Is the big bad secretly Agnes? Or have we been tricked again? Whatever the case, with only a few episodes of “WandaVision” to go, it may be time for the villain to face the music.