Times Insider explains who we are and what we do, and delivers behind-the-scenes insights into how our journalism comes together.

“Don’t you ever want to just sit back and enjoy it?”

That’s a question I’ve often been asked during my 27 years as a daily theater reviewer for The New York Times. And now that I’m leaving that position (my last day is Thursday), it comes up more frequently than ever, with the implication that I must be panting to be able to watch plays without having to think about them so hard.

But the short answer to that question is an undiluted “no.” One of the main reasons I never stopped loving this job is that I can’t sit back and go limp, like a passive slab on a massage table. It is a point of honor for me to avoid that state when, if the show is slow, my thoughts might drift to other matters: Where am I having dinner after? What if I left the air-conditioning on? Why is my date so grumpy?

Allow me to make a confession here. I do not like going to the theater. I love being at the theater, and I love writing about the theater. But what happens before and after and in between — the schmoozing, the mingling, the dining, the waiting in the rain for taxis — hasn’t given me a thrill in decades. People who regularly accompany me to plays have often heard me mutter, in a claustrophobically crowded theater lobby, “I don’t know why I’m still doing this.”

Such surly sentiments can persist right up to the moment the house lights dim. But once the curtain goes up, a switch flips on inside me. I feel nervous, expectant and palpably, exhilaratingly in the moment. In that sense, I imagine, I’m experiencing a milder version of what the performers onstage go through every single night.

This is live theater, after all. We’re in this together. Those people up there need us as much as we need them. And I’m being paid to participate, with all senses wide open, in this fraught, blessed exchange of energy. I’m being paid to pay attention.

This means that I am hyper-aware of all the moving pieces that make up a production, and that a part of my mind is assessing how successfully these elements cohere. While this might suggest a cold and clinical detachment, I find that it’s an approach that makes me feel more vital, more connected, more grateful.

Paradoxically, this “objective” assessing perspective enhances the pleasure of my unthinking self — the part that responds viscerally to a work’s beauty or fearful symmetry, and feels elation or pity and terror. When a show is really working, my gut eclipses my mind. 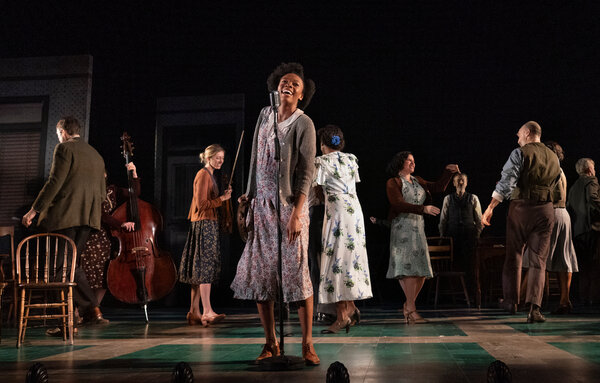 That’s the moment when the mostly illegible notes I’ve been taking segue from recorded minutiae (“Why beer bottle on bookcase?”) to a series of exclamation points or phrases like “Oh, wow, she’s actually going there!” that later I can’t recall having written. (The notes for my last review of a Broadway production before the pandemic shutdown — Conor McPherson’s strange and radiant “Girl From the North Country,” a Depression-era drama woven with the songs of Bob Dylan — are full of ink blots and tear spots.) But I don’t think these moments of transcendence would have felt nearly as sweet without the coexistence of that initial, analytical approach.

I come from a family of writers, editors and academics for whom criticism was not only a profession but also an everyday philosophy. Even when I was a theater-struck child, I couldn’t get away with saying at the dinner table that I simply liked — or, more probably, “adored,” as I was an affected little thing — a play. My parents insisted, gently, that I had to be able to say why. (And was “adored” really the word I wanted?)

It’s an approach that served me well as an English major in college, and in my earlier stints as a fashion critic for Women’s Wear Daily, in my 20s, and later as a movie reviewer for Elle magazine. But it was at the ripe old age of 38, when I joined The Times, and was able to write about the art form that I had always loved most, that criticism became an ecstatic calling.

I can honestly say I’ve never been bored at the theater during the past several decades. That’s because I’ve learned that nothing is boring if you really focus on it. This is a worldview I’ve tried to apply when I’m stuck in traffic or waiting for someone at a restaurant or looking at the bedroom ceiling when I wake up.

When the theater returns, I hope to be attending it as a lover, a supporter, a fully engaged fan boy. Which means I’ll be there as a critic.