Alexander England has built his burgeoning career playing nice guys such as Offspring's Harry Crewe and Danger Close's Jack Kirby. But in his latest roles he's breaking bad − as a psychopathic stalker in Seven's steamy Secret Bridesmaids' Business and as a commitment-phobic manchild in zom-rom-com Little Monsters, opposite Oscar-winner Lupita Nyong'o.

It doesn't take me long to work out which version of the 33-year-old Albury-raised, Melbourne-trained, LA-destined actor I'm lunching with, though. With his tousled golden hair, beaming smile and generally sunny demeanour, England could easily be mistaken for a giant labrador puppy. 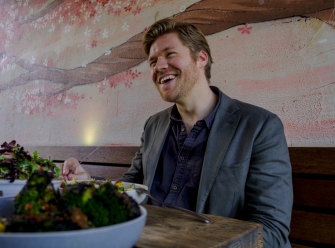 “I’m fond of this pub”: Alexander England at the Empress Hotel.Credit:Luis Ascui

He's chosen the venue, the beer garden of the Empress, a one-time rock'n'roll pub in North Fitzroy that's now all about food and wine and craft beers.

"We had our 10-year reunion right here in March," says England, referring to his acting class at the VCA. "I am fond of this pub."

He orders the fish of the day (barramundi) and I get a steak (porterhouse, medium rare), with sides of garlic roast potatoes and chargrilled broccoli to share. I order a pint of Porter and he allows himself a steam ale.

"I didn't drink for a little while," he says. "The character I play in Secret Bridesmaids’'Business is a narcissist, and I read that it's a common trait to increase self-esteem through overt physical enhancement, whether that's haircuts or nice suits or whatever. So I just thought I've got to look the part, you know. I'll cut out the drinking for a little bit – and it's interesting how much your focus changes. I really do think drinking is a ritual for social engagement." 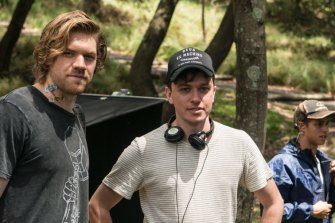 He doesn't say this with any hint of judgment, but it's clear the idea of doing things in moderation looms large. His father is a psychiatrist, his mother an artist and environmentalist, and equilibrium matters in his world. He tells me he chose the pub in part to counter some of the fancier venues he reads about on these very pages. "I think a bit of balance is kind of my path through things, and so I thought a nice pub was a good choice to represent those ideas."

He knows the sensible middle way may not be as immediately sexy as the more out-there options, but it's more sustainable, mentally, physically and emotionally.

"It's easy to sell the story of extreme Method acting, like Leonardo DiCaprio in The Revenant, Christian Bale, whatever," he says. "Those stories about the actor going to such an extreme make for a great story, a great selling point. And I think that's influencing young actors who are kind of thinking 'That's the way to do it, that's how you get serious'. When, of course, the alternative is just to kind of use your imagination and do acting the regular way. To imagine you're there. To act."

It's an approach that has been serving England well enough since he landed his first role, not long out of acting school, in the Seven colonial-era series Wild Boys. It was his big break, until he got his big break. 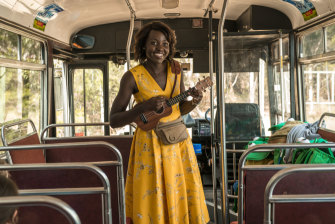 "I busted my knee really badly on that show. A horse knocked my kneecap to the back of my leg. It was six months before I could move freely again. But I had such a great time working on Wild Boys; it was the first time someone said, 'Yeah, we'll trust this guy'. I was just so thankful for that experience.”

When he was ready to work again, he stumbled into Howzat!, Nine's series about the founding of World Series Cricket. It was a kind of ground zero for a certain generation of young male Australian actors – Brendan Cowell, Damon Gameau, Angus Sampson, Matt Le Nevez were all in it – and many of them are still mates.

"That's where I met Abe Forsythe," he says. "He was playing John Cornell. I was playing Tony Greig. Abe was such a lovely guy."

Forsythe has been acting since childhood and directing since his teens. He put England in an episode of Mr & Mrs Murder, then in his feature debut Down Under playing the dimwitted but sweet-natured Shit-Stick in a dark comedy about the Cronulla race riots. 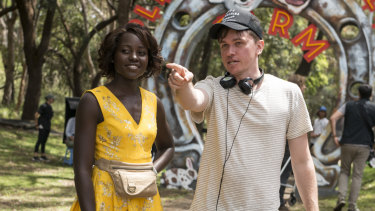 Lupita Nyong’o and director Abe Forsythe on the set of Little Monsters in Sydney. Credit:Simon Cardwell

Now England is the male lead in Forsythe's mad horror-comedy about a kindergarten outing to a petting zoo that goes off the rails when genetically modified zombies escape from the US military facility next door. Little Monsters was snapped up by US distributor Neon and streaming service Hulu after it debuted to a rapturous response at Sundance in January, and it hits local cinemas next week.

Nyong'o, who won the best supporting actress Oscar in 2014 for 12 Years a Slave, plays Miss Caroline, the ukulele-strumming kinder teacher who maintains her sangfroid even when covered in blood and brains. England's commitment-phobic Dave is smitten, and trying not to be bitten.

When you find yourself working with someone who has won an Oscar for a Very Serious Role, does it suddenly feel like you've landed on a different level?

"You know, I wondered that," he says. "I distinctly remember sitting with Abe in the rehearsal room waiting for Lupita to arrive on that first day and thinking is this going to be a profoundly different experience, wildly outside the realms of what I know. And of course she came into the room and was just so lovely."

So there was no sense that she was doing you a favour just by being there?

"No, no, although she was," he says with a laugh. "She didn't wear her Oscar on a chain around her neck or anything like that, she was just part of the team and that's when the best stuff happens."

Sometimes, though, working with the big names really does feel different, like when he found himself standing on the ramp of a spaceship that had "landed" in New Zealand's Milford Sound while shooting Alien: Covenant for Ridley Scott.

"And you know, Michael Fassbender is over here and Billy Crudup is over there, and it was amazing. It was really amazing. And I had to try not to have a big grin on my face." 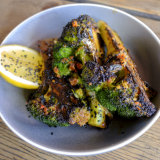 As a kid, England had free rein over his parents' 15-hectare hobby farm. "There was room to just play and hide and run around and pick up a stick and pretend it's a sword and entertain your own unfolding story of majesty and success," he says. "I would love to do a sword and sorcery sort of thing. That's where it all started for me."

We don't make too many of those in Australia but when we meet, England is just about to pack his bags and head to LA. He's been going over for short stints for a few years now, dipping his toes and hoping to land something good. This time he plans to stay a little longer.

"I don't waste energy trying to be an American actor any more, which for a little while I tried to do," he says. "I remember walking into an audition once and I had my cargo pants on and my big combat boots and this hallway was just lined with guys in cargo pants and big combat boots. I got on the plane at the end of that trip and just thought I've spent the whole time trying to be somebody else in an effort to fit in."

These days, he's realised his greatest chance of success lies with just being himself. And if that doesn't work out, well, that's OK too.

"Acting is so much fun but it has limited agency as opposed to other creative forms, so you have to protect yourself a little bit," he says. "The first step is to acknowledge that it can be a taxing ride and very bumpy. Some people put pressure on themselves to 'manifest' things, this positive-thinking sort of stuff. But the idea that things will work out if you just believe hard enough, if you try hard enough, that's not true.

Even when you do get work, he adds, there's no guarantee it will turn out the way you'd hope. And that is why it's so important to be a good person on set rather than one of those infamous (but, he claims, relatively rare) A-grade A-holes.

"Once you've finished your job as an actor, the finished product can go anywhere, so the on-set experience is so important because that's what you're really holding on to, that's your experience of the thing," he says. 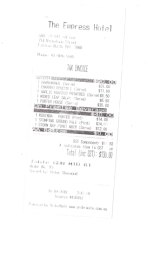 Receipt for lunch with Alexander England at The Empress Hotel.

"If you can really focus on it being a nice experience, then it's been a positive thing in your life already. You've got nothing to lose when it comes out, and you're not hanging your whole career and identity on that finished product, which is pretty disempowering."

I don't know if England's approach – privileging the process over the product; understanding that not getting the part need not equal rejection; treating acting as a job, not a life – is shared by many of his colleagues, but it probably ought to be. The performing arts are hotbeds of depression and substance abuse, in large part precisely because rejection and all it entails, including financial instability, is such a part of the life.

What he's advocating is, for want of a better word, balance.

Maybe it owes something to growing up with a resident shrink in the house. But England says one of his greatest lessons came when, as an out-of-work actor, he landed some work in a casting agency, reading opposite actors who were auditioning for parts. He remembers reading with eight or nine actors for a single role and realising that at least half of them could do it perfectly, each in their own distinct way.

Rather than blanche at the weight of competition, he took it as a sign that there's room for lots of different types in his industry, just no guarantees.

"And as soon as you recognise that then you realise that your not getting the job doesn't mean you're worthless," he says. "It's liberating."

Little Monsters is released on October 31.

23 Sep 20
Autumn dates are all about cosying up in a pub with some wholesome grub, a…
Lifestyle
0