Arnaud Jerald takes a breath, tumbles in the water, disappears. Down he goes, deeper and deeper, tracing a weighted rope into darkness, his elongated flippers swishing in rhythm, his wetsuit aglow like a superhero’s leotard. He reaches a rubber ring, marking 120 metres in depth, the deepest anyone has plumbed in one breath. He pivots. Steeples his arms. Glides back to the Bahaman air.

This record alone, set last month, has lent oxygen to Merriam-Webster. America’s chief dictionary has recently listed 370 new entries, including free dive (no hyphen) as both noun and verb. More than a record, the Frenchman’s plunge compelled a fresh headword to be recorded.

COVID-19 compelled plenty more, from subvariant to false positive, but why dwell on the negative? Springtime arrivals deserve a sessional ale, with sessional another cleanskin. Both words qualify for a longlist, allowing editors to gauge the public’s response, as software charts usage across society’s living corpus. 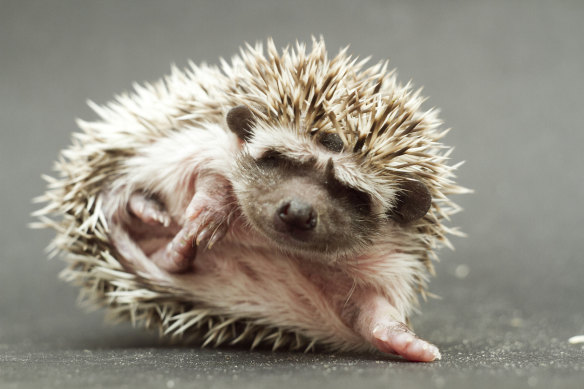 It’s hard to resist this hoglet.

Magnet-fishing, say, might well be a cool fad, as prospectors lucky-dip their magnets into creeks and rivers after treasure, but unless the mania extends into a bigger pond, for further years, then the hobby will take its own free dive over time.

Quiet quitting, on the other hand, feels a stayer, registered among the Macquarie’s stand-by batch. Also known as acting your wage, quiet quitting sees a worker observing the contractual motions, shunning excess hours, or any duties skipped by the small print. It’s a strategy to preserve work-life balance, the quiet quitter neither stepping down nor overstepping.

Elsewhere, hoglet (a baby hedgehog) and tuxedo cat (white vest, black jacket) spark a smile. While other entries, like metaverse and pwn, adorkable and virtue signalling, seem long overdue. Then there’s a further bunch in want of vapourising. Looking at you, skin hunger (the urge to touch another human, often via handshaking). And you, nepo baby (a celeb’s bub who scores all the perks).

Despite what you think, pumpkin spice is not Posh’s understudy but a blend of “cinnamon, nutmeg, ginger and cloves commonly used in pumpkin pie”. Over in Tunisia, ras el hanout is a staple rub of cumin, chilli, cardamom, coriander and clove, among other delectable C-ingredients.

Heavenly compared to sponcon (sponsored content, as often brandished by Youtube influencers), gigafire (the mother of all infernos) and clapter, being the “applause or laughter showing agreement with the sentiment behind a comedian’s joke”. The amen of amusement.

Two new verbs imply a sad trend in the dating game, where would-be partners are either hardballing (laying out the terms of engagement prior to the relationship finding its own way) and swerving (an agile version of ghosting, or active avoidance of the other). Separate from the Tinder tribe, my favourite verb is prebunk: to refute false information before it’s published.

Closer to Yuletide, we’ll sense which words might make the 2022 cut. Today’s column is just a shallow dive into the extended dictionary, with English too oceanic to occupy one neat container. Lewk, laggy, doorbell camera, goblin mode – and many more are baying for inclusion, suggesting Jerald’s quote after completing his record-making feat: “When you make the dive, it’s bigger that what I can imagine.”

Indeed, much of lexicography resembles a headlong plunge into street slang and social media, script and lyric, hobby and recipe, fanfic and Urban Dictionary, retrieving what novelties your blind hands find amid the shadows, then dragging the haul back to the surface, testing how long your findings last in the light.

To read more from Spectrum, visit our page here.

The Booklist is a weekly newsletter for book lovers from books editor Jason Steger. Get it delivered every Friday.

27 Oct 20
There are some peculiar things going on in Buckingham Palace. Most royal followers already know…
Lifestyle
0

31 Oct 19
Here’s a problem. All pregnant women are offered the flu jab but less than half…
Lifestyle
0

24 Aug 20
WITH THE launch of PS5 now imminent, more and more gamers are rushing to catch…
Lifestyle
0